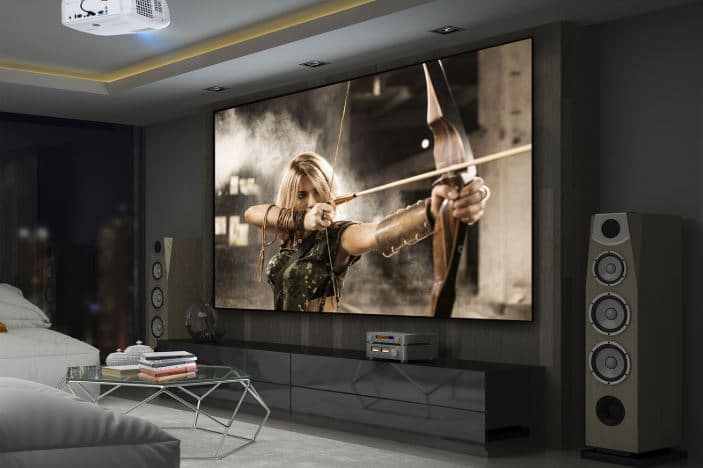 Watching music videos and movies on a big screen and  HD gives you a great experience. Yet, you didn’t buy your projector for movies only; you still want to watch live TV shows, sports, and fascinating documentaries with the same comfort.

You have asked yourself how to use a projector as a TV easily and safely. Thankfully, there are many ways to use a projector instead of a TV, depending on your projector’s abilities. However, you’ll have to find other adapters or additional software for some projectors to use as a TV.

To use a projector as a TV.

Can You Use a Projector as a TV?

Yes, you can easily use a projector as a TV for most functions. However, TVs have inbuilt TV tuners that make it easy to receive on-air broadcasts.

Since most projectors lack streaming features and inbuilt TV tuners, you’ll have to buy additional external adapters. By doing so, you can stream live your best TV shows at ease with the screen size of your choice.

Here are some external features you can use.

Streaming device: Streaming devices such as Fire Stick and Roku helps you watch your TV shows from Fubo TV and YouTube apps. Buy one to enjoy exclusive online content.

Inbuilt apps: Some modern projectors have built-in features such as Android TV and other native-run apps. You can stream the TV shows directly into the projector without using an external device if you have such a projector. It’s better to find these projectors if you find it hard to make many connections on your projectors.

TV tuner: TV-tuners work the same as cable boxes to link the projector to the local broadcast channels. You just need to connect an antenna to the TV tuner and the projector. You’ll continue enjoying fascinating TV shows on your TV stations like the TV.

How to Connect TV to Projector HDMI

The first thing here is to check if your projector has an HDMI port. To do that, check out the seller’s manual or visually inspect the projector’s body.

How to Watch TV on Projector Without Cable Box

With the technology growing swiftly, many people are growing out of using satellite dishes and cable boxes. Instead, they prefer using modern methods of watching TV shows using a projector. So let’s see if we can watch TV on a projector without a cable box.

We need a network source, for example, WiFi, and a smartphone, laptop, or a TV for streaming purposes. If you lack any of the above devices, you can prefer purchasing a cheaper streaming device such as Sling TV, Google  Chromecast, or Roku streaming stick.

How to Watch Free to Air TV on Projector

Although many people use projectors for movies and gaming, sometimes it’s interesting to watch live sports or even soap operas on a big screen. However, projectors lack an inbuilt TV tuner making it difficult to watch free-to-air programs.

To watch free-to-air TV on a projector, you need a cable box or a TV tuner. Firstly, attach the antenna to your tuner box through the coaxial input and ensure that the connection is clear.

Still, you can link an HDMI cable to an amplifier that distributes audio to your speakers. The HDMI cable also connects the video to your projector.

If you lack an amplifier, connect the individual speakers to the cable box or a TV tuner through audio out.

Some on-air TV stations also go live on social media apps like Facebook and YouTube. Therefore, you can use streaming gadgets such as phones, laptops, and tablets and link them to the projectors to enjoy these on-air TV shows.

You can link those devices easily to the projector using an HDMI cable.

Can I Connect TV to Projector Wirelessly?

Yes, you can connect your TV to a projector wirelessly. Wire-free set-ups help avoid cable clutters in your house and save you money. But unfortunately, wires are prone to accidents and make your home look disorganized.

To wirelessly connect your TV to a projector, you need to purchase a wireless transmitter gadget such as MyWireless TV2. Therefore, you can install your projectors anywhere outside or inside the house without cables.

A wireless transmitter gadget works in all devices having an HDMI port, a projector included. That means you can connect one to your projector and enjoy live streams from YouTube, Facebook, and other sites easily without cables.

To connect a wireless transmitter to your projector, plug it into the HDMI port. It would help if you supplied power to both your transmitter and projector.

Another way of wirelessly connecting your TV to the projector is by using WIFi other than other wired connections. Thus, it’s possible to eliminate any trip hazards and allows neatness in your house.

If your projectors are mounted to the ceiling, the wireless connection is the best choice. WIFI also comes in handy when your compound is full of kids who’re likely to trip or mess up with the wires.

Why Buy a Projector Instead of TV?

Yes, due to the exclusive advantages of a projector, you can buy one instead of a TV. These are reasons why a projector is an excellent alternative to a TV.

You’ve just bought your television; you can either hang it on the wall or require a huge stand. A projector saves you both the floor and wall space. Where a TV becomes the central figure in the entire room, a projector is smaller and can be put on a shelf reducing the floor space.

If you compare the sizes of a TV and a projector, you’ll find that the latter is small and easily portable. So if you’re bored with watching movies at home, carry them to your friends’ homes and enjoy them together. You can also carry the projector in a backpack.

Think of a movie party night; you can carry your projector and project it to a blank wall and enjoy it with your friends.

Everyone desires to have the biggest screen in the universe. Think of buying a large flat-screen TV that costs you more than 300 dollars? Yet, a projector that costs you less than 100 dollars saves you a pretty large sum.

Not only saving you money, but the projector also gives you the biggest watching screen, up to 120 inches wide. Not forgetting the quality of the images and videos, the projector is the best.

If you have playful kids in your house or kittens who don’t know how strong they are, that’s where a projector comes in. Especially if the projector is wireless, it will surely put your mind at ease.

The projector is durable, small, and less likely to come on people’s way in the house. It also saves you on any additional costs caused by breakages and malfunctioning of your TV.

How to Link a Projector With a TV Tuner

Linking a projector with a TV tuner can be challenging, especially if you’re a freshman with projectors. That’s because projectors lack a coaxial cable input that’s key for TV tuners. So projectors are also mounted on the ceiling where it’s coaxing to run cables.

For such situations, an HDMI transmitter may be rampant. Wireless HDMI transmitters technology isn’t well-developed since it’s a recent discovery. However, they can transmit video and audio signals for shorter distances.

To link a projector with a TV tuner,

When it comes to choosing between a 4K projector and a 4K TV, there are a few things to consider. Projectors tend to be more expensive than TVs, but they also offer a larger screen size and better image quality. TVs, on the other hand, are easier to set up and take less space.

Here are a few things to keep in mind when deciding between a 4K projector and a 4K TV:

Ultimately, the decision between a 4K projector and a 4K TV comes down to personal preference. Consider what’s most important to you in terms of screen size, image quality, cost, ease of setup, and space before making your decision.

Is Watching a Projector Better than TV?

Yes, watching videos through a projector is better than using a TV, especially regarding eye care and video quality. Projectors produce large and HD videos that put less strain on the eyes.

Additionally, as the TV screen emits light, the projector only reflects light into your eyes. Therefore, the light produced by projectors is harmless to your eyes even after enjoying your favorite TV shows for a long.

Concluding: How to Use a Projector as a TV

You can figure out that using a projector to watch TV is doable and can also be compelling. So if you’re looking to buy a big flat-screen TV, a projector may be of high quality and a pocket-friendly option.

You still consider your health and safety when planning to buy a TV. Therefore, a projector comes in handy to ensure that your eyes are safe. Also, there are few accidents since the projectors are suspended on the ceiling where they can’t come into people’s way.

We hope this article directs you on using a projector as a TV safely. So buy one and enjoy limitless comfort in watching your favorite live sports and shows.

How to Get Rid of Shadows in Pictures...

How to Do Side by Side Photos on...

How to Get Disposable Camera Pictures on Your...

How To Clean Your Garbage Disposal?

How To Protect Yourself from Cyberbullying

How to connect two monitors to one computer...

How to Screenshot Only One Monitor?