While setting up a new TV or plugging in a Blu-ray player, you must have seen the ARC label on an HDMI input. Is it a feature of concern? Let’s find out.

The ARC label on your HDMI input may not reveal more information. However, it is among the latest technologies to feature in advanced home-theater systems. It allows one to carry out several activities using one cable. Besides, it simplifies your system setup, reduces cable clutter, and saves money.

Below, we’ve discussed the ARC HDMI port in detail, including its features and how it relates to the standard HDMI cable.

Related: HDMI vs. DisplayPort vs. DVI vs. VGA: Quick Comparison

HDMI ARC stands for High Definition Multimedia Interface Audio Return Channel. It provides two-way communication between devices using one HDMI cable. In other words, it lets you use the HDMI cable as input and output. This way, you don’t need any additional composite optical or audio cable to connect to your TV.

HDMI ARC was introduced to the market in 2009. The introduction of HDMI 1.4 has made ARC available on televisions. Besides it is also available in soundbars. It is supported in all devices compatible with HDMI 1.4.

Related: Best Soundbar for Projector: Top 7 Options to Consider in 2023

In summary, connecting your TV to an audio system using the HDMI ARC lets you do the following functions:

How to Set Up an HDMI ARC Connection 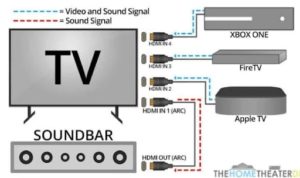 Connecting an HDMI ARC cable between a TV and an audio system involves plugging one end of the cable into the HDMI input in your TV and the other end into the HDMI ARC output on the soundbar. Fortunately, most HDMI cables are ARC-compatible.

There are two ways of connecting your home theater system using ARC. Assuming you have a soundbar, TV, game console, receiver, and Blu-ray player, you can connect using the HDMI ARC in either of the following ways.

1. Using the TV as an HDMI switch

Using your TV as the HDMI switch allows you to use the TV as the central hub for your system.

Use the steps below to make the connection.

You can switch between the game console and Blu-ray player sources using your TV remote in this setup. In addition, you can use the TV remote to control the soundbar’s volume. However, you can not play 5.1 or more surround sound, especially if you use more surround receivers than soundbars.

2. Using a soundbar/receiver as an HDMI switch

This setup lets you use the soundbar or receiver as the central hub of your home theater system.

Use the steps below to make the connection.

However, most budget soundbars don’t have enough HDMI ports for this setup. In this case, you’ll have to connect your home theater system using procedure (1) above.

The receiver/soundbar being the system’s central hub, you’ll use the soundbar’s remote to switch between the game console and Blu-ray player sources. This remote also lets you adjust the volume. The TV’s remote only comes into play when turning on the TV and accessing in-built apps.

What Is the Difference Between HDMI and HDMI ARC?

The main difference between HDMI and HDMI ARC cables arises from their functionalities. A regular HDMI cable would transmit video signals only. On the other hand, the HDMI ARC cable, other than transmitting video signals, also transmits audio signals from the TV to a soundbar. This feature allows you to transmit video and audio signals in a two-way communication manner as input and output.

What Does HDMI ARC Port Do? FAQs

Can Any HDMI Port Be Used for ARC?

Yes, any HDMI Port can be used for ARC. Nearly all versions from HDMI 1.4 can be used for HDMI ARC port connection. To connect, input one end of the cable to your TV ARC-compatible HDMI input in your TV and the other into the HDMI ARC output on your soundbar.

Can I Use HDMI ARC as Regular HDMI?

Yes, you can use HDMI ARC as regular HDMI. When plugging the HDMI ARC cable into an ARC-incompatible device, it should work as a regular HDMI cable.