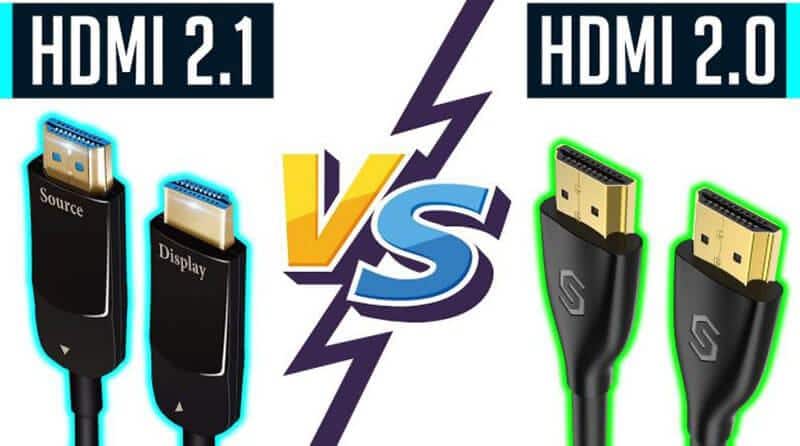 HDMI cables have been around for years advancing with new technology emergence. You may wonder, what’s the difference between the two HDMI versions? Although not much difference, the latter technology comes with higher bandwidth and better refresh rates that favor most gamers.

HDMI has two main versions, and they’re all different. HDMI 2.0 is the most common version, and it supports a maximum of 1080p resolution and Dolby TrueHD and DTS-HD Master Audio formats. It also supports 4K video at 60 frames per second. On the other hand, HDMI 2.1 is an update to HDMI 2 that adds HDR (high dynamic range) support and faster refresh rates for a smoother gaming experience.

HDMI 2 vs. 2.1 comparisons are based on the following features:

What’s the difference between HDMI 2 and 2.1?

HDMI 2.1 and HDMI 2.0 (or 1.4 or 1.3) are the latest standard versions, which have been around since the early 2000s. These are technically different, but they’re both built to work with the same devices and standards.

Related: How to Set or Change Your Monitor to 144HZ – Follow These Simple Steps

HDMI 2.0 is the most common type of cable that you’ll find in homes: it provides a maximum bandwidth of 18Gbps, which allows it to transmit high-quality video and audio signals and support resolutions up to 4K, HDR, and 3D gaming.

HDMI 2.1 provides a maximum transmission bit rate of 48Gbps, thrice the 2.0 version bandwidth. Meaning it has faster refresh rates and higher video resolution output. In addition to supporting HDR, the 2.1 version introduces Dynamic HDR with higher resolution rates for high-quality videos. (In other words, HDMI 2.1 has more bandwidth than HDMI 2.0.)

The most significant upside of HDMI 2.1 is delivering 4k resolution at 120fps and 8k at 60fps video output. This capability makes the 2.1 version ideal for game consoles like the Xbox Series and PlayStation 5.

HDMI 2.1 is backward compatible with previous versions of HDMI, so you can use it with your current setup without changing your cables. The increased bandwidth (the amount of data you can transfer) means you can get higher resolution content from your TV or monitor and HDR content that offers a broader color range and more realistic pictures in dark scenes.

Does HDMI 2.1 Make a Difference?

You can use this technology with 4K TVs, Blu-ray players, and other devices that support 4K resolution. The higher bandwidth of HDMI 2.1 allows for greater detail, faster frame rates, and better color reproduction.

For example, if you’re watching a movie on a 4K TV, you might notice that the colors are more vibrant and lifelike than on a standard 1080p screen. You’ll also see smoother motion with less lag time between frames. This difference is due to the higher bandwidth of HDMI 2.1 compared to earlier versions of HDMI standards.

HDMI 2.1 has been designed specifically for 4K TVs, so they can take advantage of this new feature without buying new hardware or updating their software settings manually by installing an additional driver or firmware update.

No, you don’t need HDMI 2.1 for 4K (or anything else). HDMI 2.0 is the current standard for connecting 4K and other high-resolution media to your TV, monitor, or other display devices. It does not offer any special features that would make it better than HDMI 2.0 for your use.

HDMI 2.1 is a new version of HDMI that many manufacturers have introduced as an improvement over earlier versions of the cable connector (HDMI 1.4 and 1.5). It includes support for Dolby Vision HDR and ARC (Audio Return Channel) features, along with others that allow it to improve the quality of video signals transmitted over cables between devices like TVs, Blu-ray players, home theaters, etc.

Notably, if you have a TV that doesn’t support 4K, or you’re not a fan of 4K content, then using HDMI 2.1 won’t help you get better picture quality than you could get by using an older version of HDMI (2.0).

If your TV supports 4K, and you’re looking for better quality in your entertainment experience, consider upgrading from HDMI 2.0 to HDMI 2.1—it will be worth it!

HDMI 2.1 is backward compatible with HDMI 2.0 ports, which means you can use a 2.1 cable on a 2.0 port without worrying about compatibility issues. However, you will want to ensure that your display supports the current version of HDMI to avoid any potential problems.

A good example is your TV or monitor’s HDMI port: it may be capable of receiving a signal from a device that supports HDMI 2.1 but not from one that does not support the updated standard. In this case, you would need an adapter cable to get around this restriction and connect your new device to your old display using only one cable instead of two (one for audio and another for video).

The HDMI 2.1 standard was created to provide higher bandwidth for 4K video than the previous standard of HDMI 2.0. This higher bandwidth allows for higher refresh rates, smoother gaming, and more realistic rendering when playing games with an HDTV. Although both are great, HDMI 2.1 has an excellent video output.