Are Headphones Legal While Driving?

Are headphones legal while driving? Most drivers like to listen to or sing along with their favourite music while in the car, A lot of people invest in cutting-edge car stereo systems with surround sound speakers to get the best effect, but have you ever stopped to wonder if wearing earphones while driving is legal?

The answer to this question is that it depends on where you live or where you are travelling to. For example, if you live in the USA or plan to visit there for a holiday or to see relatives, it will depend on what the law says for each state that you find yourself in.

The laws around wearing headphones are still a little sketchy in some countries across the world, but in places where there are laws against wearing headphones, this will also apply to pretty much all variants including headphones, earplugs and earbuds, and even newer technologies like Airpods and earpieces.

In the United States, you can find a list of states and what their current headphone-wearing while driving rules are. You can find this list on the American Automobile Association (AAA) website.

For UK drivers, for example, if you are caught wearing headphones while driving it could land you up to a £5,000 fine and an instant driving ban! But again, the rules are not black and white.

Careless driving carries an on-the-spot fine of £100 and three penalty points on your driving license, but if the police take your case to court, then you could see your fine being increased to a maximum £5,000, up to nine penalty points and even see you being banned from driving.

In Australia, wearing headphones while driving isn't technically illegal, but using them while driving could still land you on the wrong side of the law.

Everyone agrees that wearing headphones while driving can be distracting, but in Australia, it is not technically illegal to use them while driving. There is no law in existence (as yet) which specifically prohibits wearing them while being in control of a car. However, the practice is still considered to be dangerous by police and just like in the UK, you can be at risk of prosecution, especially if you were found to be wearing them when involved in a motor accident.

The new NSW Road Rules (2014) make it an offence for a driver to drive a vehicle if he or she does not have proper control of the vehicle. So there is a potential under this ruling for police officers to charge drivers for being distracted and therefore not in adequate control of the vehicle. Hearing aids are an exception to the rule, though.

The sound of silence can drive you mad!

Listening to music while driving is second nature for most people. Driving in complete silence can lead you to insanity, so why not crank up the volume and sing your heart out?

However, there are some safety issues that you must bear in mind while listening to music, such as being able to hear oncoming sirens from emergency vehicles to alert you so you can move your car over safely to let them through. A life could be depending on your actions, so you don't want to be utterly oblivious to your surroundings while driving your car. 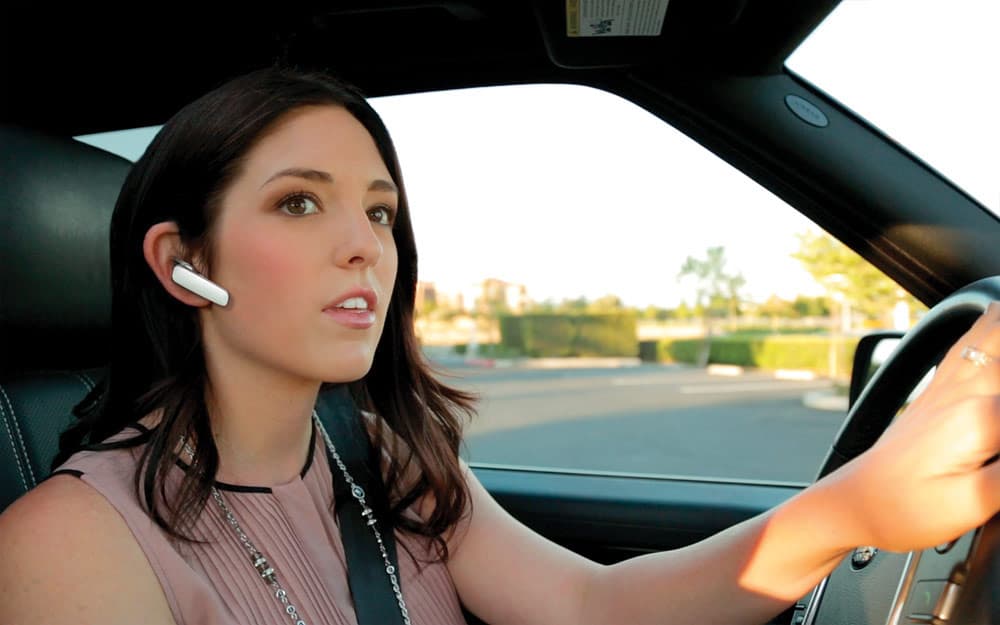 Should I Use The Stereo System Instead?

If your car has a working stereo system, then it makes sense to use it. It will be more comfortable and safer than wearing your headphones.

Should it be legal to wear headphones while driving where you currently are, then don't abuse the freedom by cranking up the volume too high. It would be much safer to keep your music at a level where you can still let some background noise in so you can be aware of any issues arising on the road around you.

It can be easier to use earbuds in the car while driving rather than a set of ear-covering headphones. Using earbuds means that you can listen to music with just one ear while leaving the other ear free to listen out and keep alert for warnings.

Don't Let Your Headphones Distract You

If you are planning a road trip and have checked whether it is legal to wear your headphones while driving where you are, then it would be wise to pre-plan your music choice before you leave home. Set up a favourite playlist that will last for the expected duration of your trip so that you are not distracted by your music running out.

One of the most significant risks of wearing headphones while driving is becoming distracted by tapping on different music apps or selecting short playlists from your phone. You should never try to drive while at the same time choosing tracks from Spotify as you cruise along a motorway.

Leave the temptation to tinker with music apps until you stop driving. Messing about with apps is on the same level of distraction and danger as texting while driving, which is illegal and will be met with strict action by police should you get caught.

What About Riding Motorbikes With Headphones?

While driving a car and using headphones can be very dangerous, the risks more than double if you even think about riding a motorbike while wearing earbuds!

The leading cause of motorbike rider fatalities is death by collision. In almost all cases, the rider loses out, so the best possible advice for anyone thinking about wearing earbuds while riding their bike is DON'T DO IT! You definitely need to hear what's going on around you – for your own safety.

While it might seem unfair to be denied your headphones while driving a car, it most definitely makes sense for safety reasons. Whether or not it is legal to wear them where you live or where you plan to travel, the dangers associated with wearing them make it highly recommended that you find an alternative.

How to save toolbars in Minecraft?