Does Chromecast Need WiFi? Yes And No! 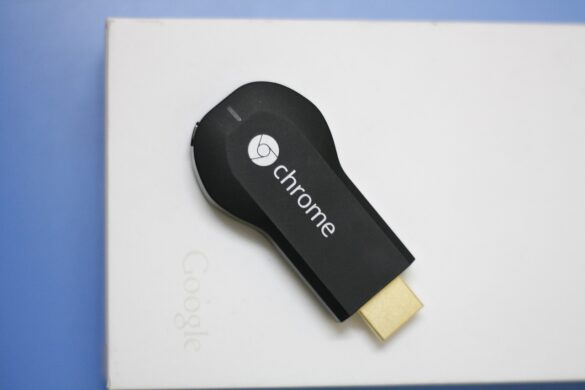 The answer is yes and no. If you mean whether you must have a broadband connection to use Chromecast, the answer is no; Chromecast doesn’t necessarily need wifi in that sense.

And yes, Chromecast needs wifi because it’s a media streaming electronic dongle. As such, the internet is an absolute necessity.

However, be warned, as this method requires lots of data— you might want to consider a data plan. To use Chromecast without wifi, use the following main ways.

Related: How to Setup Chromecast in a Few Easy Steps

Chromecast, No Internet Connection: How?

It’s possible to enjoy Chromecast without wifi in the broadband sense, therefore, using your phone connection.

Chromecast is such a dear device because of its casting convenience for its users. You’ll enjoy your favorite Netflix, Disney, Youtube, and others on your TV from your smartphone, whether at home or while traveling.

Typically, that means even if the TV isn’t a smart TV, Chromecast turns it smart. You only require a Chromecast device, a smartphone (android or iOS) TV/monitor with an HDMI port, and Wifi.

How to Chromecast Without WiFi?

To cast Chromecast without wifi, you need two devices; one for the hotspot and the other for casting, as you’ve seen.

The latest Chromecast models, like Chromecast Ultra and Chromecast for Google TV, don’t require an extra smartphone to follow the steps below. With only one smartphone, you’ll be good to go. Let’s start with Chromecast without wifi for using an android phone.

To Chromecast without wifi with android smartphones, do the following. The process below is for both android and iOS users.

Note: If you’re using Chromecast for the first time, connect your Chromecast to your monitor/TV through the HDMI                port on the TV and the other end to a power supply.
2. Hold the button as it blinks orange until it turns back to white. Immediately it stops blinking; release it. It will bring a message like the following. 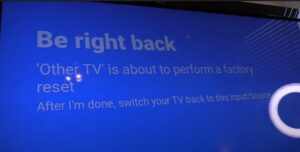 3. Now take one android device and download the google home app if you don’t have it. It serves as a wireless router,          but it’s a hotspot.

4. Turn off your wifi. So swipe down to do that.

5. Turn on the mobile hotspot. In my phone, you press and hold the mobile hotspot section. But there are other ways to do that, depending on your device. Other devices call it tethering. Either way, you can access it through the settings application by searching for it. 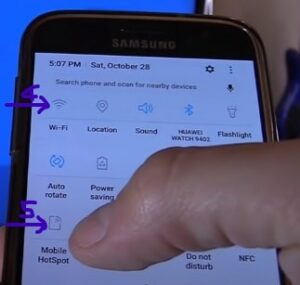 6. Long-press the Mobile-Hotspot button to create a hotspot. You can also go to settings, to a mobile hotspot, then create a temporary. This first device acts as your mobile hotspot. 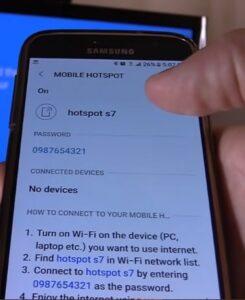 7. Next, take your second device. It could be a smartphone or a tablet. In our case, it’s another android smartphone. We’re going to use it to cast. So download the Google Home app. Ensure it’s up to date.

8. Open Google Home and tap start. Select your user account and click ok. Then turn on the location and click on next. It will show on your phone Chromecast found. 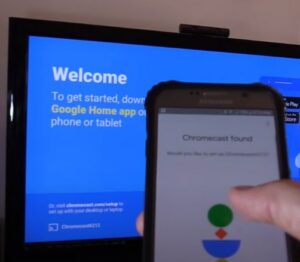 9. Check out your Id to ensure you have connected the proper devices. Check your monitor’s bottom left and your phone slightly beneath “Chromecast found” to see whether the numbers match. Mine were Chomecast6212.

10. Click next for the second ID. The second id should match your TV and phone. If they do, click yes. 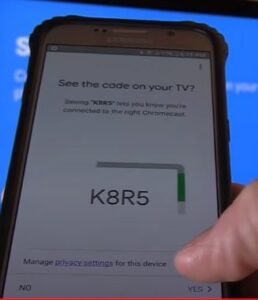 11. Next is naming your room by clicking the add-a-custom-room-name button. Hit next. Go ahead and add the name you like.

12. Then click the wifi hotspot and put the wifi password. Remember the hotspot’s password we made? Input that one. Remember, we are using the other phone as a hotspot. So remember that’s the one we are using, not your home wifi. After connecting to the internet, the Chromecast takes time to update. Give it a couple of minutes. And you’ll be good to go. 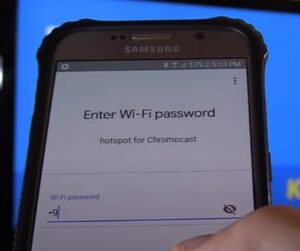 Different android devices here differ. Some, you can click on the program you want to watch, then cast, and your second smartphone becomes your remote control.

For others, you have to start by going to the Chromecast app. Then to devices. It’s going to suggest to you connect-to-wifi. Ignore that message and go ahead to the devices section. 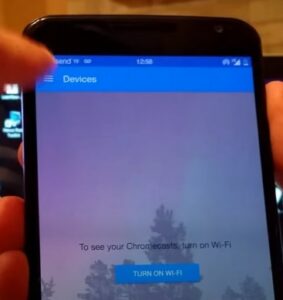 So your second device becomes a two-in-one super device. It serves as the wireless router, and you can simultaneously use it to google and make phone calls.

Related: How To Turn Off Chromecast? (Simple Steps!)

To use Chromecast without WiFi through your android, use the guest mode. Follow the following steps.

How to Use Chromecast Without WiFi iPhone

You’ll go straight to casting to use Chromecast without WiFi through your iPhone because it’s only android users need to enable guest mode. So do the following.

However, with iOS, some apps won’t allow Chromecast without wifi.

In conclusion,  the most straightforward way of using Chromecast without broadband wifi is using the guest mode.

Google introduced the Guest mode so that if you have a guest who wants to use your Chromecast, they will do so without having to connect to your private network. Allowing guests to use the same network as your Chromecast device means they can control it. That can get annoying, especially with Chromecast for Google TV and Chromecast Ultra, the latest Chromecast models, which don’t have a guest mode.

But you can utilize Guest Mode if you aren’t near your home wifi or it’s not there for whatever reason. For instance, when you go on vacation, are in a hotel, or go camping.

Samsung TV Not Connecting to Wi-Fi – Reasons And Solutions

Why My Internet Connection Keeps Dropping and Reconnecting