How Many Lumens for Outdoor Projector? 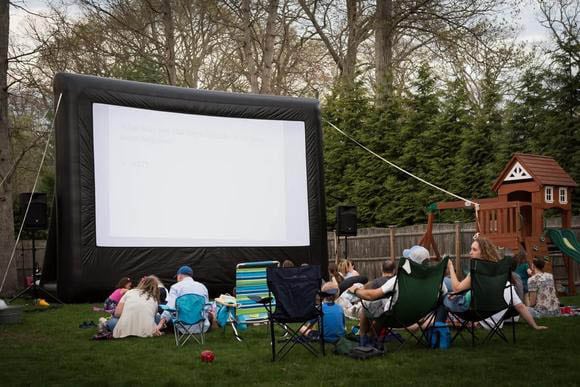 Running a projector outdoors is vastly different from running it indoors. That’s because you’re also dealing with the surrounding lighting parameters and must ensure that the projector is brighter than the other parameters combined.

In projectors, the brightness is usually measured in lumens and labeled with ANSI lumens.

If you want to screen outdoors during the daytime, you’d need an outdoor projector with at least 2,000 ANSI lumens. That’s a good starting point. Depending on the ambient light and screen size, you may have to invest in a more powerful projector specialized for outdoor projections in daytime use.

But when should you invest in a 5,000-lumen projector for the outdoors? And will an entry-level 300 lumens projector make the cut at night? In this article, I answer that for you.

How Many Lumens Do You Need for an Outdoor Projector?

Various factors determine how many lumens of brightness are necessary for a given setting. You must understand these factors and take them into account. As already mentioned, 2,000 ANSI lumens are often recommended for outdoor settings. But take it with a grain of salt.

Here are a few things to consider when deciding on the lumens needed for an outdoor projector:

The first factor if your projecting outdoors is ambient light. It is the amount of natural light as well as the artificial light in the surrounding.

When indoors, the ambient light intensity is about 400 to 600 lumens. Of course, this can depend more on the lights you’ve employed. Likewise, when you’re outdoors, the brightness can range anywhere from 1,000 lumens to 6,000 lumens.

The projector needs to produce more lumens than the surrounding light. If you’re planning to screen the projector in broad daylight, aim for a projector that produces at least 2,000-2,500 ANSI lumens.

The next factor to consider is screen size. The bigger the screen size, the more lumens you’d need to cover the entire screen.

You may get a dull and dimmer image projecting on a bigger cinema screen with an entry-level projector. Most drive-in theaters that screen movies in the afternoon use a projector with 2,500 to 3,500 ANSI lumens.

Screen sizes over 100 inches (like those used in large auditoriums) demand a projector with 5,000 to 7,000 ANSI lumens.

When considering screen size for a projector, consider the screen’s image diagonal. This is the length from one end of the screen to the opposite end.

Along with screen size, you should also consider the distance between the projector and screen. The more the distance, the more lumens you’d need to produce sharper images.

And screen size is not the only factor. Movies or high-end games, for example, would demand higher image brightness than PowerPoint presentations.

So you need to consider the image brightness (nits) when calculating lumens.

The third factor is screen gain. It is the ratio of light reflected from the surface to the light received from a source. The higher the screen gain, the brighter the images will look on the screen.

For outdoor use, you should use a screen that reflects the most light in all directions. A screen gain of 1.0 is the bare minimum. Anything less than that means the images appearing on the surface are darker than the image being projected at the surface.

So how bright does a projector need to be when outside? If you’re projecting under the sunlight, try to go as high as possible. But even then, you may not be able to compete with the sunlight’s intensity, especially during the noon hours.

Therefore, always look for a shade. In such settings, a 2,500 lumens projector can deliver outstanding results. The EPSON Home Cinema 1060 is a 3000 lumens outdoor projector perfect for this range.

If projecting inside a board room with open windows, you may work with a low-end 1,000-lumen projector.

It’s the ambient light intensity that you need to beat.

The X-axis is the image brightness measured in nits, while the Y-axis states the screen size. The projector you need to buy is the intersection of the two.

Likewise, for images of 400 nits, you’d have to buy an 8200 lumens projector for the same screen size as the Yaber V6.

So it’s a balancing act between lumens, screen size, and image brightness requirements.

A lumen is a measurement unit to define the brightness of a projector. For projectors available in the US, you’ll find the ANSI (American National Standards Institute) lumens as the unit.

But that’s not the case worldwide. Some projectors would have a different unit to specify the brightness.

If not ANSI lumens, you’ll have one of the following units for brightness:

The conversion between these units is not straightforward. For example, lumens to lux conversion requires calculating the spherical radius and surface area.

The best option is to stick to the same units of measurement when making the comparison. Or you can make use of online calculators to get the equivalent numbers.

What is Color Light Output (CLO)?

You might have noticed another brightness specification in modern projectors, Color Light Output, or CLO.

It’s a new standardization published in May of 2012 and was adopted by 3LCD projector manufacturers. But what is CLO, and how it’s different from ANSI lumens?

Thus, the colored images in DLP projectors will often be dimmer than LCD or 3LCD projectors.

In other words, they can both have a rating of 3,000 ANSI lumens, but their CLO ratings will differ. However, CLO numbers are only concerned with colored photos and don’t affect black-and-white images.

If you’re looking for a quick recommendation, I’d suggest you purchase the BenQ TK700STi 4K HDR Short Throw with 3000 lumens. It’s an outdoor projector capable of projecting on a sunny day and even under direct sunlight in some cases.

The 4k resolution, cinematic color technology, and a throw ratio of 1.13:1.47 produce more explicit images in ambient lighting conditions than most other projectors.

It is compact for outdoor use and weighs around 9 lbs. Featuring 2 HDMI ports, you can connect to multiple devices at once.

If you can afford to spend a few more dollars, consider investing in a 5,500 lumens projector. For more options, read through the 6 best outdoor projectors I’ve reviewed in another article.

How to Disconnect Roku TV From Wifi

TikTok on Roku – A Complete Guide