What Is Gain on a Projector Screen?

You can control screen gain to direct light from a particular location or to decline light from certain angular zones. You can also reduce screen gain by tinting the surface using colors and dyes, like selecting a gray color to darken the white and improve its contrast.

The projector screen gain calculator determines the ratio of the amount of light being reflected from the projector to the viewer.

E.g., if your projector screen has 1,000 lumens and the gain ratio is 2.0, then the reflected brightness will be 2,000 lumens, making it slightly brighter than the initial brightness.

How Do I Measure Gain on a Projector Screen?

Screen gain is measured from the center of the screen’s viewpoint, which is the projector’s brightest reflective point.

When you measure the screen brightness from the side, the light of the projected image drops off and becomes half brighter than the one viewing at the center, also called a half gain viewing angle.

Screen gain is also determined by the type of material used on your screen, and some materials can either increase or decrease the light on the projected image. 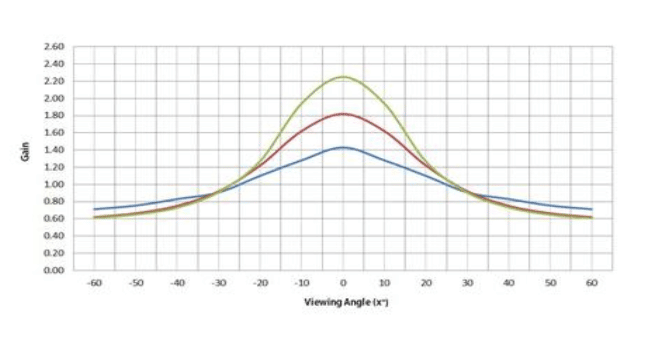 Screen brightness is measured using foot-lamberts, or you can use the SI unit. The recommended brightness of a screen should be between 12fl to a maximum of 22 fl. A brightness of more than 22 fl is recommended for places with ambient light.

What Is a Good Gain for a Projector Screen?

The industrial standard gain of a screen is 1.0. This shows that the reflected brightness is dispersed equally on all sides and still clearly visible from various angles.

What Is a 2.0 Gain Projector Screen?

A 2.0 gain is when a screen reflects double as much light as the standard 1.0 screen gain. Alternatively, the projector image reflects in one direction towards the optimal view instead of in multiple directions.

The brightness becomes slightly brighter than the 1.0 gain, but not twice as bright. Due to this, screen images are not as brighter when viewed from the side, as the light aims more toward the center of the seating area.

Low gain screens minimize the projected image’s brightness; they carry a gain factor rate of 1.0 to 1.3. Low gain has a vibrant contrast and is suitable for places where ambient light is minimal, like home theaters and small rooms.

High screen gain reflects more of the projector’s light power towards the projection path and less light power to the other angular zones. This reduces the brightness from the center optimal view range and the half gain viewing angle.

High-gain projectors cannot evenly reflect colors like blue, green, and red; this causes color alterations in images that are visible as you move in various viewing angles.

Rear projectors have a better concentration of color and contrast in surfaces with extreme ambient light, while more lumen vanishes. When using the rear projector, you are likely to use fewer lumens than the front projector since it is near the screen.

Since rear projectors are located near the screen, they will require a short-throw lens for the screen to be filled. They also require a particular type of screen that will let the light go through it.

On the other hand, front projection screens tend to be brighter when used in darker rooms. Though the brightness will depend on the screen gain and projector output, the front projection is more viewable, but the space is minimal.

In front projection, the projector is positioned away from the screen in a central place. The space can be behind or above the audience, allowing most light to be thrown back to the audience to give a proper visual.

A front projector can briefly obstruct visuals on the screen as people move around in front of it. It may result in placing the projector on taller stands, which can be more expensive and have poor visual clarity. Also, the fan causes noise that can be a problem for the people seated near the projector.

Comparison between the front and rear projection screen;

The best gain rating is the 1.0 standard since it allows the projector to reflect light perfectly without destroying the image’s brightness. A higher gain than 1.3 will negatively influence the viewing angle and poor hot spot. It is essential to balance gain, so use that with a ratio of 1.0 to 1.3.

How Does a Projector Gain Increase Picture Quality?

By increasing the brightness, the quality of images produced by a projector screen becomes brighter and distinct. Brightness can be increased by adding higher light output or projector lumens rating.

How to Increase Projector Lumens?

Related: How Many Lumens for Outdoor Projectors?

How to Increase Your Projector Brightness Output? Darken the Room

If your projector is dimmer than you can handle, make the room darker and let the only light come from the projector, giving you sharper images. During the day, you can close the windows since direct sunlight reduces projector brightness even at 4,000 lumens.

Shift to a White Projector Screen

Darker screens like gray consume most of the light released by your projector, causing the images to appear darker. On the contrary, a white screen reflects all the light cast.

High-gain screens have exceptional surfaces that improve the effectiveness of the light released, thus producing higher-quality images. Although you can only view the images from a perpendicular angle, viewing from the sides will degrade the images.

Gain on a Projector Screen FAQs

A 1.3 screen gain is in the range of standard recommended gain, and there is only a slight difference in the brightness from the initial 1.0 gain factor.

What Is Half Gain Projector Screen?

How Bright Should a Projector Be?

The level of brightness will depend on the purpose of the projector. For an indoor projector, the number of lumens should be between 2,000 and 3,000.

In comparison, outdoor and highly lit rooms should be 3000 to 5000 brightness.

The ideal projector screen has high screen gain when you want a projector to use outdoors.

On the contrary, the low gain projector or neutral setup will be better if you need to watch from a darker room.

Making the correct choice will be based on your viewing conditions, the way your projector has been applied, and the available space. Take proper care of your projector to ensure the brightness stays the same.