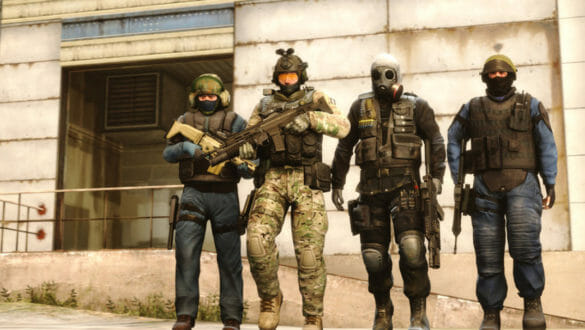 Gamesense or game sense/intuition/understanding is a player's ability to understand the state of the game they are currently in.

Examples of this include the ability to know when and where a CT (counter-terrorist) might be on a particular map or perhaps knowing when it is a good idea to take a tail from a specific position.

Gaming hunches are not something that can be easily learned, rather it comes from the experience we gain after playing for a long time. But there are simple basic things that can be learned.

Absolutely. Counter-Strike has always been 50% aim and 50% thinking. A player who easily outplays his opponents by using his brain and shooting his opponent in the back will always have a better chance of winning against even the craziest aim. I'm sure you'll recall a time when you managed to win matchmaking against a cheater who only had aim and couldn't even defuse a bomb...

When do you get pushed by CT and when do you have AWP waiting for you with your finger on the trigger?

One of the things you can learn to start with is the most common CT positions to watch out for.

Next in line, for example, is the ability to recognize where an AWP player is. When the opposition team on a de_cache map is smashing the center of the map every round and preventing you from entering the center, that's not unusual.

But what if that smoke is missing one round? Is that a sign that there's an AWP player waiting? Or did the smoke simply get forgotten this round? Even a simple flash can be used to identify AWP players.

You throw it in his direction and wait to see if he'll give himself away with a shot when the flash goes off. Remember, however, that the AWP player may just retreat and continue to wait for you to get in his sights, so a duel with him may well be unavoidable. Take for example the banana on the de_inferno map. Almost always when CTs want to be aggressive on a banana, they'll unmask the end of it, which allows them to then have total control of the banana.

This aggressive play can be extremely rewarding and just as effective, however, it can be countered with flashes and pop flashes which make it much easier to push into smurf. After all, it's not a wall and it has to be reckoned with. The same is possible, for example, on the de_cache map.

Specifically on the center. If the smoke prevents terrorists from coming out of the main entrance to the middle, it's quite likely that behind the smoke the CTs will have crossfire ready, or they can simply be hidden nearby.

There are indeed plenty of places on the maps that the CT side can use aggressively like this. So if you see such a "deep" smoke, you should always be prepared for CTs who can defend the area behind it.

One of the critical aspects of the game is definitely communication.

A simple flash to the sound of running terrorists can quite possibly indicate an immediate quick attack (rush) that can easily and quickly deal with a few CT defenders on the bombsite. However, it could also be a fake rush, and the intent is probably just to gain an advantage on players who are rotating or out of position elsewhere on the map.

The defenders on the bombsite must quickly find out what the situation is and inform their teammates.

Recognizing and reading fake attacks is much easier than some players think. If the smouks have arrived on the bombsite and no terrorist is trying to bash your heads in and plant you, it is safe to say that it is a fake or that we have at least repelled the opponent's initial attack.

If the terrorists are pushing at the same time as the Smokies, it's a good idea to keep an eye on the radar, where you can easily identify the number of enemies, and the possible presence of a bomb. It is of course pointless to rotate all your players if a bomb has not been spotted.

Gaining information and advantage for your team is one reason why you often see high-level players aggressively push and gather information regarding the alignment of enemy T players.

This aggression can potentially create a significant advantage, both informational and perhaps numerical, allowing teammates to better react to the opponent's deployment and force them to take risks or play under pressure.

The downside of this strategy, where you are trying to gain information or outright frag advantage for CT, is that your opponent can easily punish your aggressive play by preparing for it and taking a more passive approach (camping).

If this situation arises, momentum will immediately shift to the opponent's side and you will be left to either make another aggro play for CT to even the score at 4v4, or retreat to a passive position, surrender map control, and face superiority.

Next time you play, try to think about the bigger picture of the whole situation you are in and try to ask yourself what is the most logical possible course of action that your opponent would take and how can you take advantage of it?

Another useful thing you want to know is how much money your opponent has available. In CSK, you get money for just about everything. Both for winning rounds and losing rounds. For killing other players, for planting bombs and also for defusing.

The reward for killing opponents depends greatly on the weapon used to do so. For example, an AWP or CZ-75 kill will give you a mere $100, I understand that for AWP, but to disadvantage a gun made in the Czech forests like that? I'd rather have a shotgun that rewards $900 or the popular UMP that gives you $600.

Let's say you're a terrorist and you win the first round. In the second round you fight against buying guns and scouts, which probably means CT spent all their money.

If you win that round too, the CTs are totally broken and the next round is the economic round (eco). Then in round four, CT accounts are expected to have roughly $4300, and if you're sure all CT players shopped in round two, they almost certainly won't have AWP, which is huge information for your team.

Of course, if there's a CT player who didn't spend and save money in round 2, you should expect them to have AWP in round 4.

You should always try to keep an eye on your opponent's economy. You are then able to gain a simple information advantage for your team that can set you up for a better round. All you need to do this is basically elementary school math. There's no simple solution to putting this all together. Watching professional matches helps us understand how these players react to individual game events. Whether by economics and/or the grenades at their disposal.

So pay close attention to how both sides react to dying teammates, or what positioning they use if they are at a disadvantage. In addition, spend sufficient time on CSK economics.

You don't have to be an expert. Knowing how much money is credited per round won/lost is quite enough to get you started. This will make it easier to predict your opponent's weapon purchases.

Even if, for example, the worst happens and you die in a given round, there's still plenty of valuable information to pass on to your teammates.

Take your time and think about the economics of both teams and certain gameplay tendencies your opponents may have.

Use that time to develop a plan and lead your team to victory. Building game sense will greatly help you be a better player no matter what side you play for (CT/T). Understanding your opponent's movement around the map and predicting their intentions is what makes good players professionals.