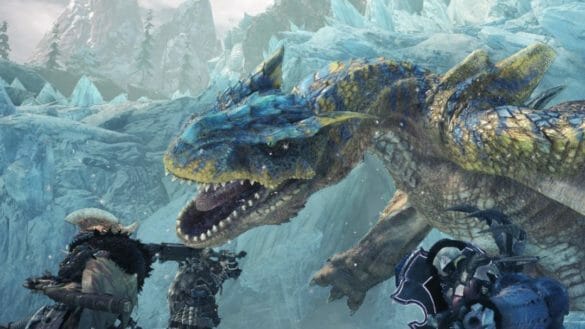 A few days ago, Monster Hunter World Iceborn released its latest update, revealing the arrival of the ancient dragon nicknamed the Black Dragon: the Doom.

Expected by many fans, the Black Dragon finally joins this opus as the final boss and offers an epic battle that will give you a hard time. To defeat this merciless monster, we offer you some tips.

To access the Fatalis, you will first have to fight the Alatreon, the first Black Dragon to appear in Monster Hunter World. The latter must be defeated in a new quest called "Burning Twilight", in which our Ancient Dragon proves to be much less tough than in the first confrontation.

Note that the Alatreon from the previous update does not have to be defeated to access this new quest. Nevertheless, it is necessary to have watched the cinematic that introduces him.

In order to defeat it, you need to equip yourself with a gear that is resistant to all the elements, as well as a weapon that does elemental damage (organize with your team to know which element to assign to you if possible) because our monster has the ability to change elements during the fight.

Also remember to take Astora's meat as well as immunizers, an amplifier and of course heals with you because the Dragon has a devastating attack in store for you which you will have to survive by healing yourself at the same time.

The immunizer and the meat will help you to recover your life as soon as you take damage and are therefore very useful for this moment.

Please note that the Doom special quest is available from master rank 24. The quest "Black Dragon '' is launched first of all in solo, you will not have the choice, if you wish to join your friends hunters it will be necessary for you to leave the combat alone. Before you go to fight the Doom, you'd better prepare yourself well. Naturally, you will need a lot of care to resist the monster's attacks, as many of its blows can annihilate you instantly. We also advise you to bring a defense cloak (guardian, escape or temporal cloak) and a teleportation in case of a desperate situation.

The quest is limited to five deaths and only 30 minutes of time, it is advisable to boost yourself with stone and demon potions or powders in order to do the most damage and lose the least time.

The weak points of the Doom are its head, its belly and its wings. The head can be broken twice during the fight, the other weak points can be broken only once. Our enemy is weak to the dragon and fire elements.

The Doom uses fire attacks, so choose a meal that offers elemental resistance if possible. Also, the dragon can be paralyzed, you can choose a weapon with this effect to immobilize it for a short time during the fight if you manage to chain enough hits.

To finish, we advise you to take the chameleon cloak with you, which will make the fight easier for you. You can also choose among these talents which will be useful depending on your equipment: Fort Schrade is divided into two areas, the second one being inaccessible at the beginning, you will have to make do with the cannons and ballistas before having access to the other weapons.

To begin with, you should take the chameleon cloak, which will allow you to go and fill all the cannons and fire one of them towards the monster's head (which is its weak point) without it noticing you. This will already inflict quite a bit of damage and will allow you to knock it down when you do the same with the second cannon.

In addition to the cannons, a ballista is available in this first phase, aim it at his head again if you have the opportunity when he is standing, otherwise use it towards his belly, it will help you to get him back on all fours.

When you've done enough damage, the Comrade will throw a harpoon, blocking the Doom on the ground for a few seconds and allowing you to attack without stopping.

Then, all you have to do is inflict enough damage to get to phase two, and you can inflict a lot of damage to its head with the grapeshot by throwing it against a wall.

Our monster has a wide variety of fire breaths, all of them can be fatal but it is possible to spot each attack and have time to react to each one.

The most fearsome is his breath covering a large part of the area in front of him.

You must absolutely avoid it and for that you can use the grappling hook to get directly on the dragon, this allows you to be safe while inflicting damage to the head.

The grappling hook can be useful throughout the fight, you will be safer on the back of the monster than on the ground when it makes its attacks.

When you make this first game in solo, a cinematic starts and makes you go to phase two. But when you do it in multiplayer, not everything happens the same way. Indeed, after having gone to this cinematic, you can finally launch the quest with other hunters.

The first phase takes place in the same way, except that now the comrade is no longer with you, the harpoon is no longer available at that moment, and the cinematic disappears, so it will be up to you to rush to the shelter to escape the devastating attack of the Black Dragon.

The wall is then destroyed and we can finally move on to phase two. The second phase offers a denser environment, with several weapons to use. Here, we find the cannons and the ballistas, but also the mobile ballista and two harpoons.

Again, the cannons can knock the Doom down if the head is hit repeatedly, the harpoon will knock it down for a few seconds like in phase one, and the rest of the arsenal is bonus to do maximum damage or force it to land when it takes flight because from that moment on, the Ancient Dragon will start to fly away. To prevent this from happening too often, you'll need to break both its wings.

Once the enemy is injured enough, he will perform his ultimate attack again. Then rush to the rampart and raise it to be safe. Take advantage of this to sharpen and heal yourself because we are coming to the final phase.

In this last part, the Fatalis will spend much more time in the air, you will have to focus on destroying its wings to pin it to the ground.

This final form makes his armor and torso more vulnerable, however the power of his fire breath increases greatly; it is imperative to break his head to reduce the impact. If you didn't use the harpoons in phase two, they can be very useful in the final confrontation since the Doom will have much more energy and will be harder to hit.

Obviously, time is short for this quest and we have very little of it. However, the fight requires concentration but also teamwork, which is imperative, as well as a well-filled satchel.

Don't hesitate to return to the camp to get care or other, the life powders for example will ensure a good management of the deaths in your team.

It is important to take time for strategy, even if it means losing one minute of combat per player. On that note, good hunting to all!