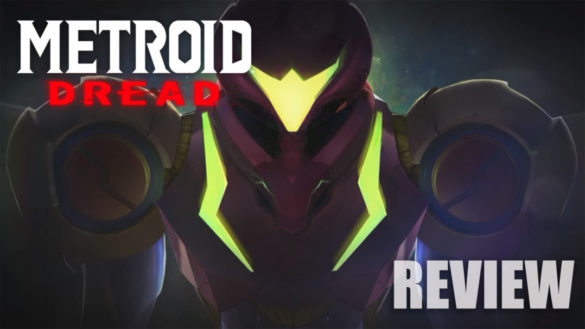 Were you to ask me to describe the feeling I got when Metroid Dread was announced, it would be impossible. You’d have to think of it as an elaborate sundae containing scoops of the unique happiness we feel during special occasions.

For me, it was one helping of the overflowing excitement a child feels after waking up on Christmas morning mixed with a serving of the joy of seeing a long-lost friend after many years. And all of that is topped with a healthy sprinkling of the pure bliss everyone must feel when being overrun by a large group of Labrador puppies.

That’s how ecstatic I was to hear that Nintendo was finally giving us a new Metroid game and not just any kind, but the 2D platformer flavor. It went as far as me breaking a long-standing rule I have not to set my expectations too high based on hype. Thankfully, I’m pleased as punch to say that not only does Dread live up to those expectations, but also exceeds them greatly. 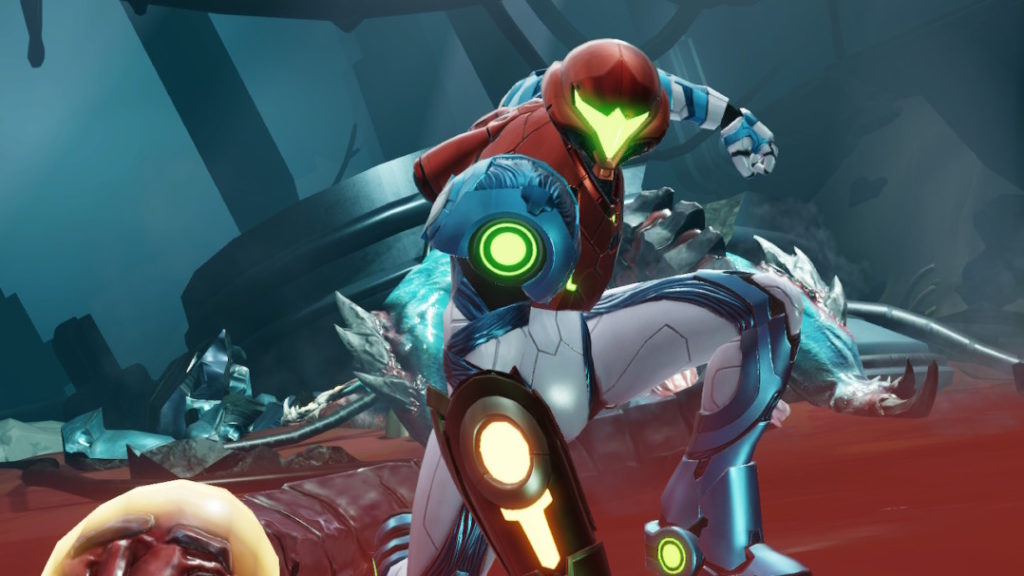 The big N has an interesting relationship with the Metroid series. As a company, they have proven time and time again - except for Federation Force - that they love these games. Almost every Metroid game that has been released has either been stellar or, at the least, an intriguing experiment.

Without a doubt, the games that put the metroid in metroidvania are some of the finest titles they release. And yet, they make them oh so sparingly. Without a doubt, we’re going to see a Mario, Zelda, and Pokemon game with some degree of regularity while Samus and her arm cannon have to be relegated to the bench for extended periods of time. Once they decide that it’s her time to step into the field, though, she brings it, and Metroid Dread carries that torch on.

The game picks up where we last left off with the legendary galactic bounty hunter. After battling and seemingly eradicating the Metroids and the X Parasite virus, Samus is once again called into action to investigate an uncharted planet called ZDR. 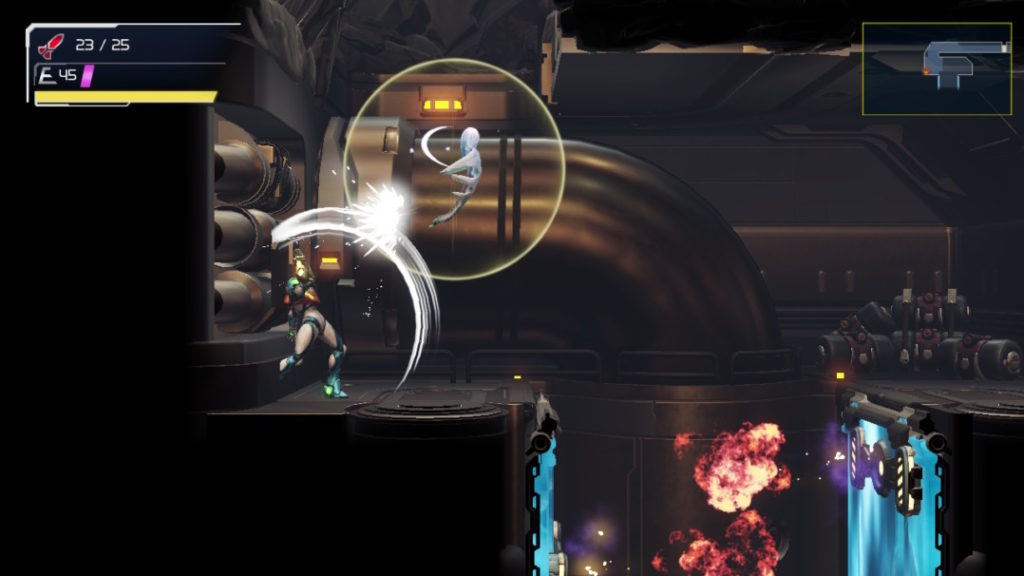 What lures her there is an image of what clearly looks like the virus she believed to have erased from existence. As she herself is immune to X Parasite thanks to her DNA being fused with that of a Metroid’s, she directs her trusty ship towards ZDR to find out what is going on. Her traveling to the mysterious planet is also guided by a secondary mission which is to uncover what happened to a group of research robots called EMMIs that went dark after being deployed there.

What Samus soon discovers is a hostile environment that appears to be part of the Chozo civilization, as well as the missing EMMIs that have now turned hostile and out on the prowl to hunt her.

Metroid has always had sci-fi horror undertones, and they’ve never been more pronounced than they are in Dread. It’s all because of the brilliant design behind the EMMI segments of the game. As one could expect, Dread’s map is a labyrinth of interconnected pathways and rooms. 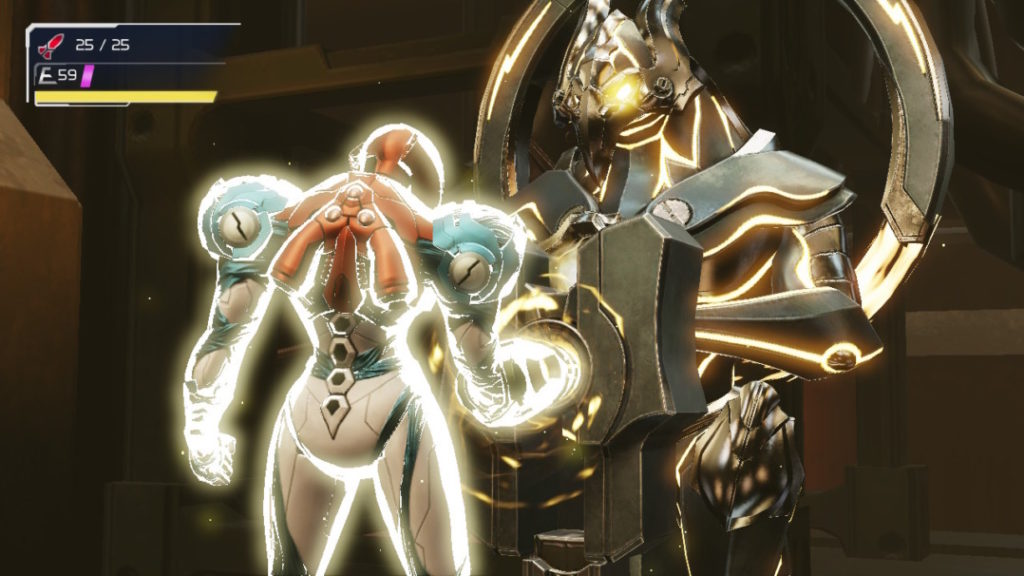 While most of them can be explored without fear, there are certain critical parts where you’ve got to be quick on your feet and cautious because of the deadly and indestructible research bots. It becomes immediately apparent that there is something different about these zones. The icy cold hue combined with the eerie music and the beeping of a nearby EMMI make entering these sections feel genuinely precarious.

Once you see that ominous red dot approaching you on the map, you have to move, or else you’re likely going to die. The short of it is you cannot fight the EMMIs. None of your weapons, including rockets, will damage them in the slightest, so your only option is to run, get whatever you need, and evacuate the area. If you’re unfortunate enough to get caught, you get two attempts at countering them, but both are extremely hard to pull off as the timing of both their grab and lethal stab is always mixed up. It’s always worth a try, but you should never count on your stellar reflexes.

When you couple this with the sheer thought that these indestructible robots will immediately make their way to your location when you make noise, you get an experience as isolating and claustrophobic as watching an Alien movie. 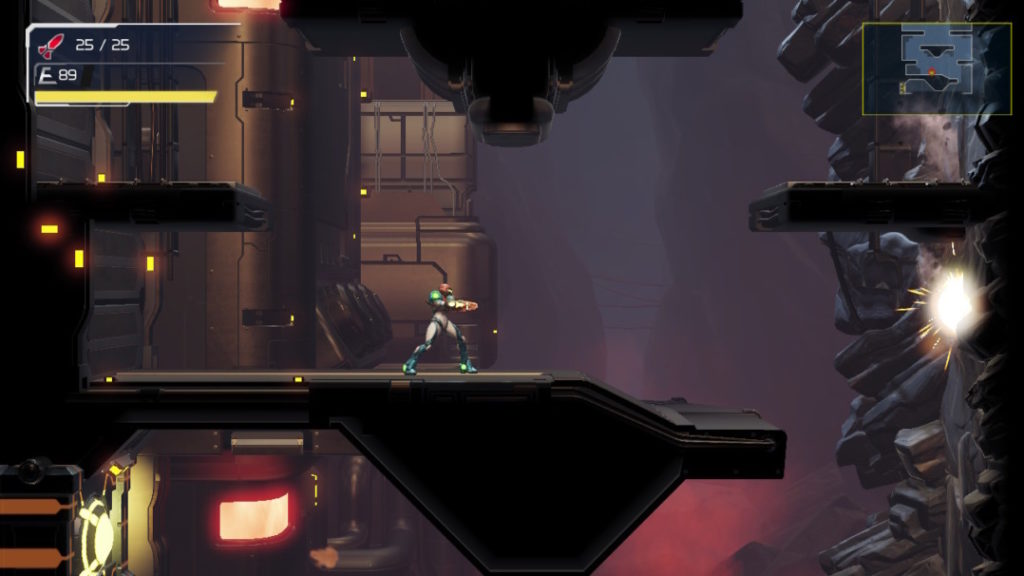 It’s clever design that adds a note of danger to the free-roaming exploration you get in Metroid Dread. Because these EMMI sections usually split each map segment in ways that force you to go through them, you’re always expected to make decisions on where to go next.

It’s not that these zones are sure death, but they’re also not the kind of places you’d have the luxury of exploring freely either. You do eventually get an opportunity to destroy each EMMI. Defeating bosses allows you to transform Samus’s arm blaster into a single shot Omega Cannon.

This blast needs to be charged for a considerable amount of time in order to destroy the scary robots. Doing so successfully not only opens up their territories for freer exploration but also grants you new abilities.

No metroidvania game with Metroid in its title would be complete without the need to upgrade your character to unlock new areas. Killing EMMIs is only one of a few ways to accomplish this. Defeating bosses and discovering hidden rooms will also grant you new ways to traverse the environment, open up previously inaccessible doors, and, of course, bestow upon you new weapons for dispatching foes. 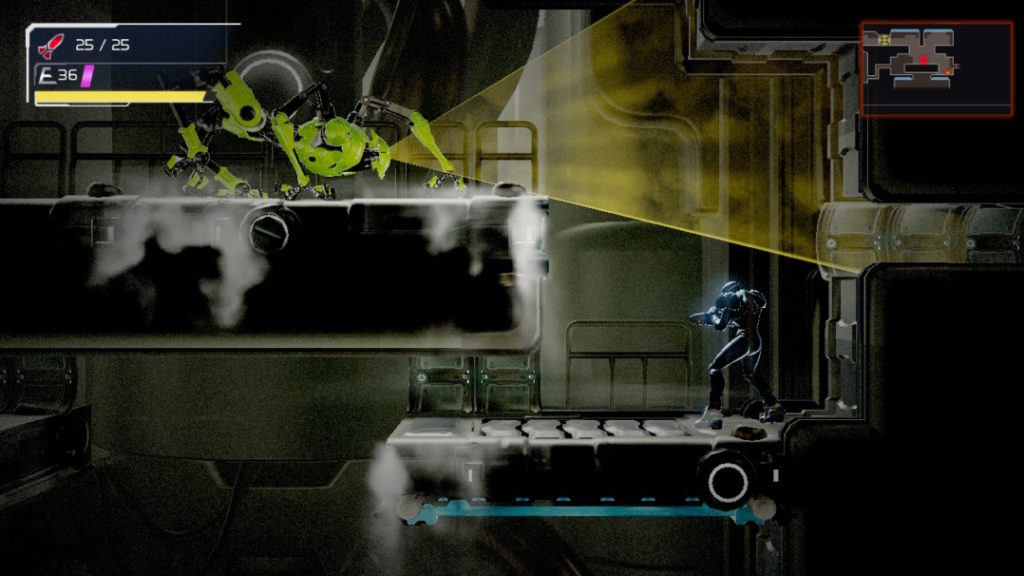 For example, defeating one of the earlier EMMIs will give you access to a magnetic wall crawl for climbing unique blue walls. One of the first true bosses you encounter gives Samus the ability to cloak herself. This skill enables her to do two things. The first is to gain access to doors that lock up when she gets too close. The other is to avoid detection from the EMMIs.

These are just a few of the abilities you’ll unlock as you progress through the game, eventually obtaining staple Metroid skills such as the Morph Ball.

While Samus has a lot of upgrades and abilities to discover throughout her journey, she does start off quite decently equipped. Apart from her standard arm blaster, she has access to missiles right off the bat. You can switch to these projectiles to deal heavier damage to more durable yet slow-moving foes by holding down the right shoulder button.

You begin the game with a limited supply of rockets but can upgrade your max stock by finding missile tanks scattered throughout planet ZDR. Missiles can eventually be upgraded in various ways, including the Storm Missile ability, which enables Samus to lock onto multiple targets and unleashes a barrage to down them all in one go. It’s one of the most satisfying skills in the game. 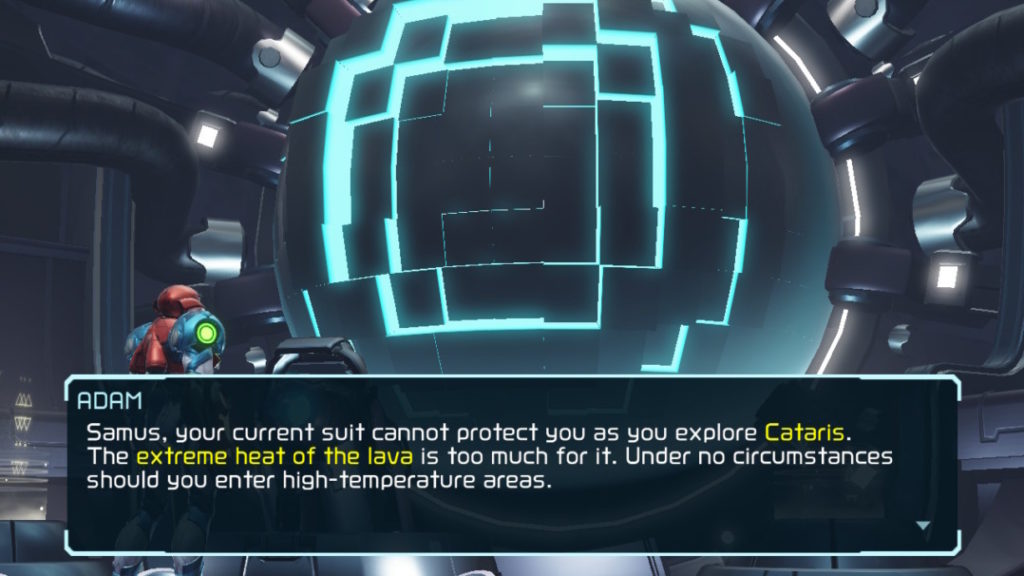 The melee counter from past games also makes a glorious return, and it’s as fun a technique as ever. When certain foes attempt to strike you with a telegraphed attack, you can time a button press to negate it and return fire with a power near-lethal blast.

Early enemies are pretty easy to counter, but at some point, you begin to run into foes that’ll try to fake you out. Samus also begins your adventure with a slide that primarily serves as a way to glide under narrower passages but can also be used in combat to close the gap or even escape the corner during certain boss fights.

I’ve touched on several abilities, but the amount of upgrades you eventually acquire is quite staggering. Still, it doesn’t even come close to being in excess. Every power and upgrade is meaningful in various contexts, which is a characteristic of well-designed metroidvania titles.

Boss fights are some of the highlights of the genre, and they do not disappoint in Metroid Dread. A key concern often lies with the difficulty these challenging foes pose with other titles, often following in the footsteps of the Dark Souls series. Dread is a unique beast in this regard as it provides its own flavor of “tough but fair” with its bosses.

Every single one has been a challenging encounter where I’ve admittedly died a fair few times. However, none of these encounters led to frustration as every death felt like a genuine lesson that made the next attempt a lot easier. The game never sends you into these fights under-equipped, either, which means you can always rely on your personal skill and not some mindless scavenging and grinding. 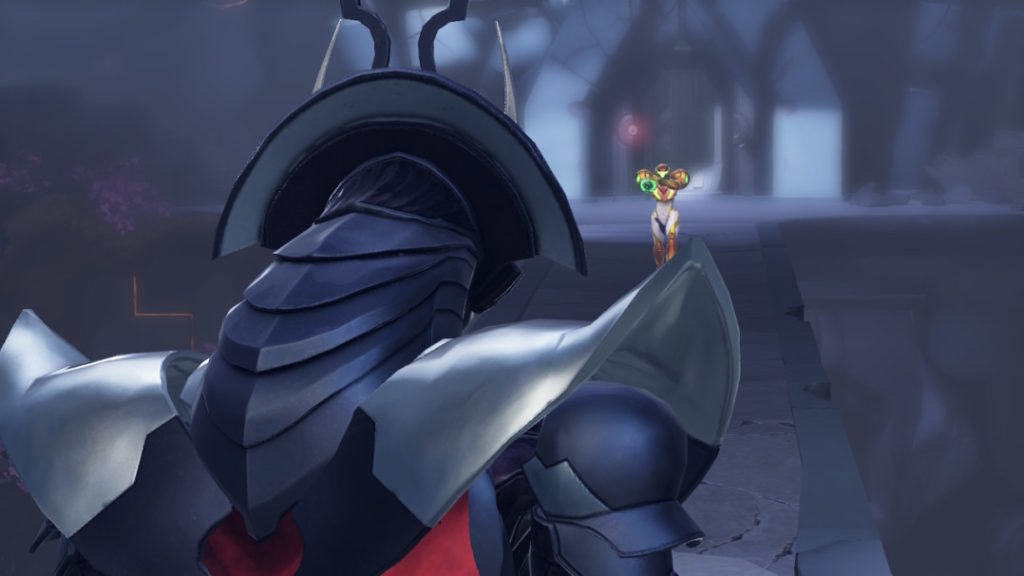 I have been waxing lyrical throughout this review, and you must be wondering if there are any blemishes. Try as I might, though, I cannot come up with a single significant negative point that needs addressing. The level design in Metroid Dread is superb.

Its atmosphere hits all the right notes, balancing horror and action-adventure seamlessly. Samus feels powerful and imposing, cementing her once again as one of Nintendo’s best protagonists to date. The labyrinth of Dread’s map never leaves you lost, thanks to its thoughtful pacing and regular save points. It brings so many new elements to the table and acts as a true evolution of the series as a new entry. Performance-wise, it plays superbly in both handheld and docked mode without a single dropped frame in sight.

If I had to gripe about one thing, it would be the forced use of the left thumbstick for movement. I regularly found myself attempting to crouch while firing but ended up making Samus aim downwards, which led to some cheaply received damage. It’s a tiny thing that I only mention if you were to twist my arm for a negative comment.

Overall, Metroid Dread is beyond a worthy entry in the legendary series. It’s the best 2D platformer entry, period. Its tight design and clever use of traversal mechanics and horror elements set a perfect precedent for future Metroid titles to come. And I sure hope we get more of them sooner rather than later next time. 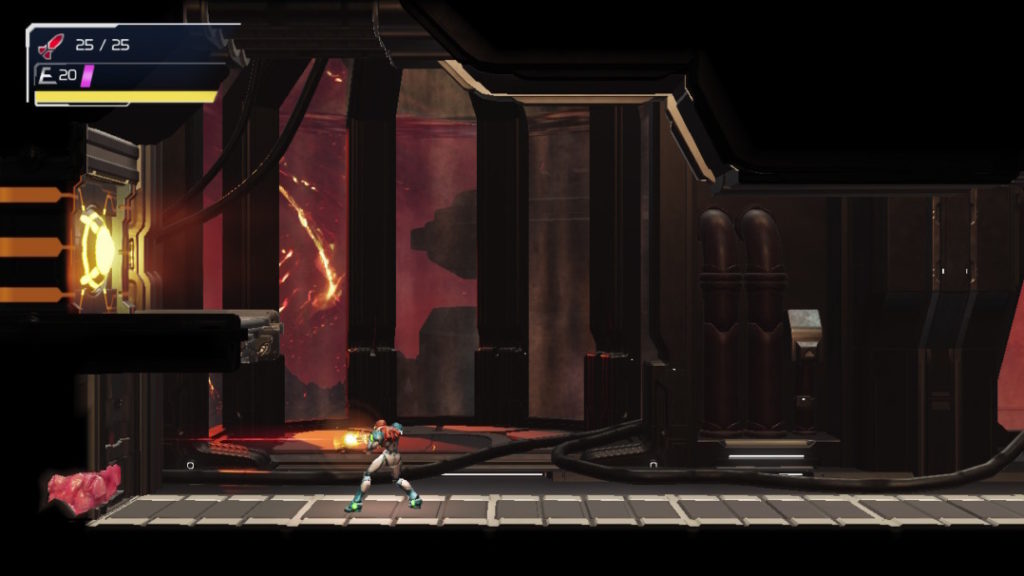