How To Apply Thermal Paste To Your CPU (Simple Steps) 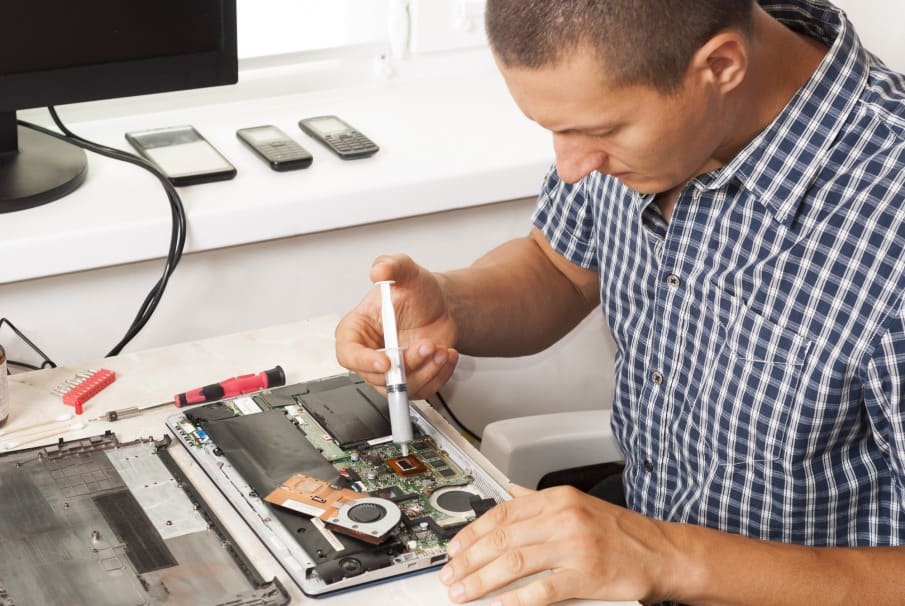 Have you ever spent so much money to have a powerful CPU? Did you customize its parts so that you could get the best performance? Building CPUs is a thing these days with gamers specifically looking for specialized parts to give their CPU more power.

However, these parts are not perfect, and without a thermal paste, you might lose all the performance you are investing in.

What is Thermal Paste? 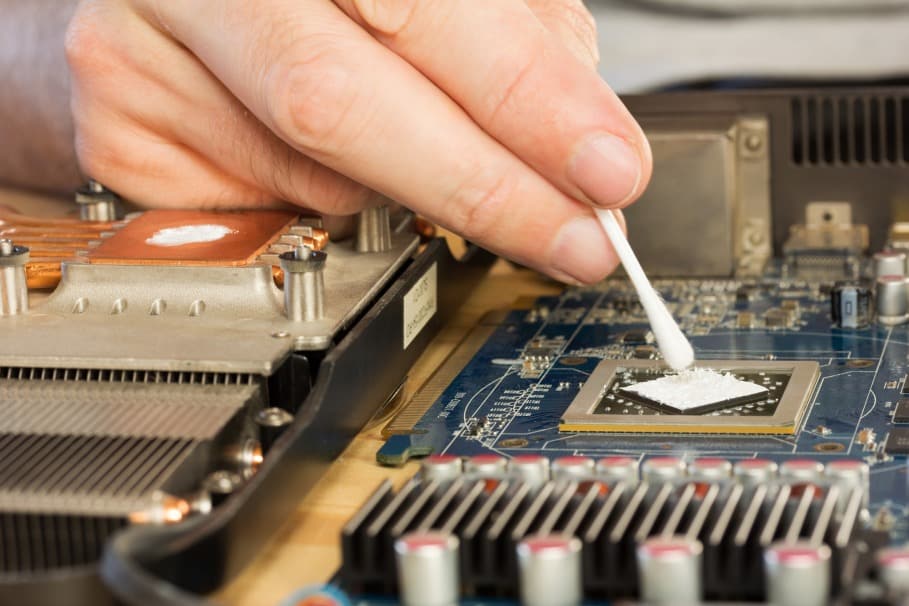 A thermal paste is simply a conductive compound that you put in between two metals. In this case, the two metals are the heatsink and the CPU. Its primary function is to help conduct heat more effectively from one metal to another. In fact, if you think about it, that’s really the only function of a thermal paste.

Why Do You Need a Thermal Paste?

Here’s the thing. When the heatsink and the CPU are attached together, they don’t often have their whole surface area sticking to each other. This means that air can go through the space between these two metals. So why not buy something that is perfectly made?

This is ideal, but in reality, not all parts of the CPU are 100% perfect. If you take a closer look, you’ll notice that even those made with high-quality materials, do not necessarily fit perfectly well with the other parts.

When there is space for air to pass between the two metals, tiny bubbles of air will form and will cause inefficiencies in the transfer of heat. Hence, the heat that the CPU or the heatsink will receive is not the total heat the other metal is producing. If you’ve invested so much on your CPU, it would be such a waste to experience low performance just because of these air bubbles.

This is where the thermal paste comes in. Since the thermal paste acts as a conductor, all you need to do is place it in between the two metals. It will increase the conduction of heat, hence, increasing the performance of your CPU.

How Do You Apply Thermal Paste? 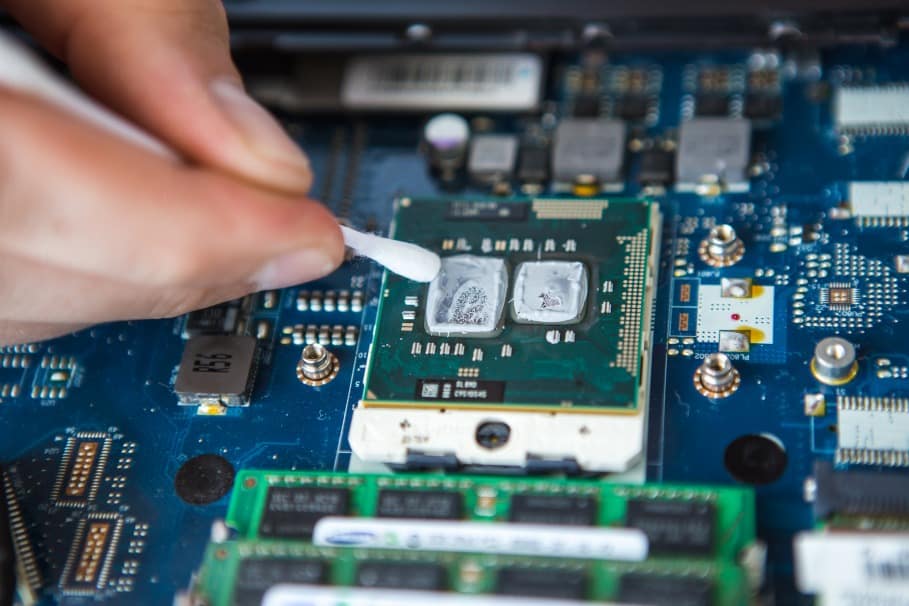 Don’t know how to apply thermal paste? No problem! Here’s a step-by-step guide to help you place it properly on your CPU.

Step 1: Clean the CPU and the heatsink

Don’t pour alcohol on the actual CPU and heatsink because that’s just a recipe for disaster. All you need to do is to ensure that there is no dust on the surface.

Once the surfaces are squeaky clean, you might want to sand them. The reason why you should do this is to make sure that the surfaces are flat. If they’re not, then they won’t fit perfectly and even with thermal paste, it’s not as flat as it would be.

Like what was mentioned earlier, it’s ideal if the surfaces are flat so the CPU and heatsink fit well. However, that’s not really the case most of the time, so it’s best to take this opportunity to flatten those flaws. All you need is a small piece of sandpaper and then slowly sand the surface. There’s no need to sand the sides, just focus on the part where you’ll put the thermal paste. Once you sand them, use a small brush to remove all the dust and dirt.

So how much paste do you apply? All you really need is just the size of a grain of rice. It should be no bigger than a pea-sized amount. Again, it should not be as big as a pea. If you’ve placed that much, that’s already too many. Plus, you shouldn’t spread the paste all over the CPU or the heatsink. Just leave it as a small dot there. 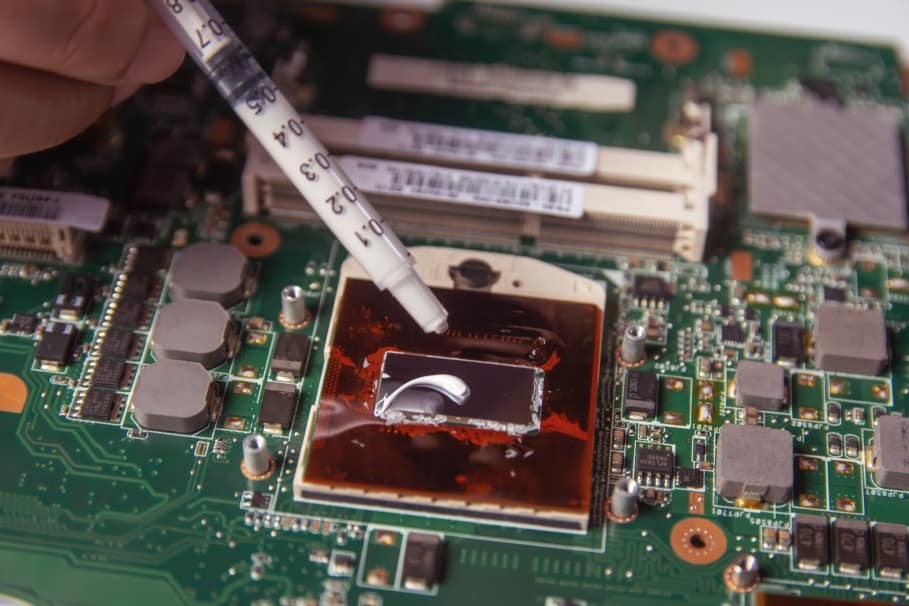 Step 4: Attach the heatsink or CPU

Depending on where you put the paste on, place the other metal on top of it. When you place the CPU (or heatsink), put it on top of the metal and then slowly lower it down.

If you will notice, you didn’t start by lowering the CPU on one side until you close off the whole thing. Why? It’s because the thermal paste won’t spread evenly if you’ve already put the CPU on top of the other side. As much as possible, you want the paste to spread equally because of the equal pressure you put in the middle. If you’ve done it right, then you will have a thin layer over the whole heatsink.

Finally, you have to let the components rest. This means that you have to keep your hands off of and just let the paste dry before you re-assemble the whole CPU. Don’t try to move the heatsink or CPU or adjust the placement of it. If you do, you might end up pouring paste all over your motherboard and doing it all again. Just let it cure for a few minutes and then you can already re-assemble.

What is Flicker-Free Technology and PWM? (Jargon Free)