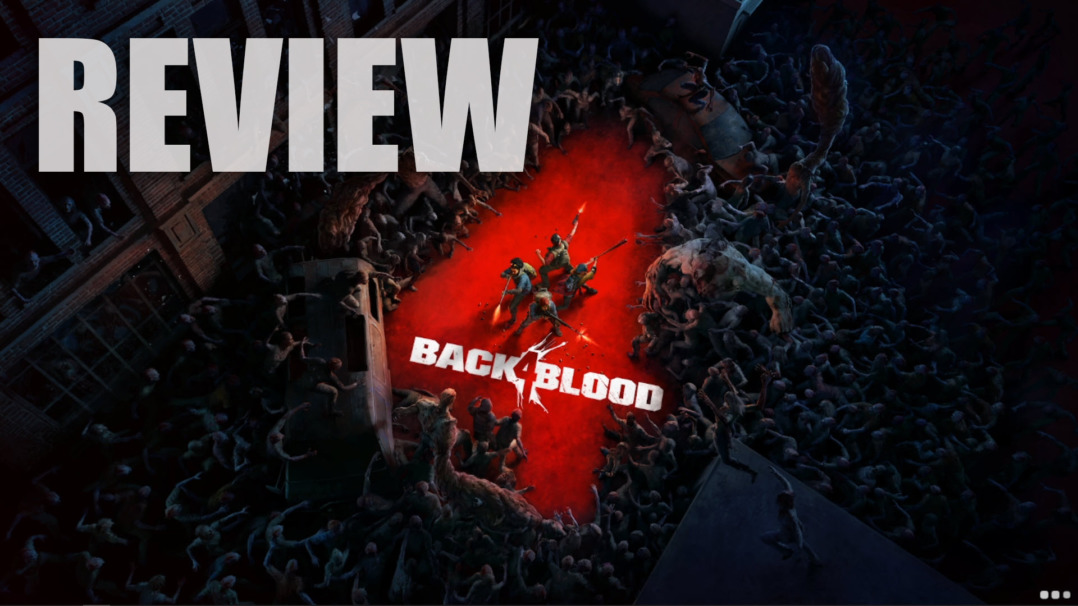 I must confess that Back 4 Blood has left me at odds with my opinion about it. On the one hand, it’s the embodiment of pure, unadulterated gaming fun. It’s completely unapologetic about how much it just wants you to sit back and have a good old time shooting zombies in the face.

On the other hand, there’s a blandness that comes peeking through its blood-spattered seams. Much like zombies, it’s devoid of any life and personality that would allow it to stand out from the crowd of co-op games out there. It’s a conundrum of the highest order. Games should be about fun first, right?

Well, if I’m judging Back 4 Blood purely from that standpoint, then it’s easily one of the most entertaining games I’ve played this year. Like its spiritual predecessor, Left 4 Dead, it cuts straight to the chase by allowing you just to dive in head-first and blow a massive horde of undead to bits without a care in the world.

However, once I start looking at the game’s lack of story, repeating enemy models and uninspired characters, I feel this game needed more time in the oven. It may be my unique disposition of being both an old-school gamer and one who enjoys innovation and advancement.

As Back 4 Blood is a game designed for co-op, the old-timer gamer in me just absolutely loves it. There’s nothing that I miss more from the past than the no-nonsense cooperative experience that thrusts my buddies and me into the action without much mucking about. 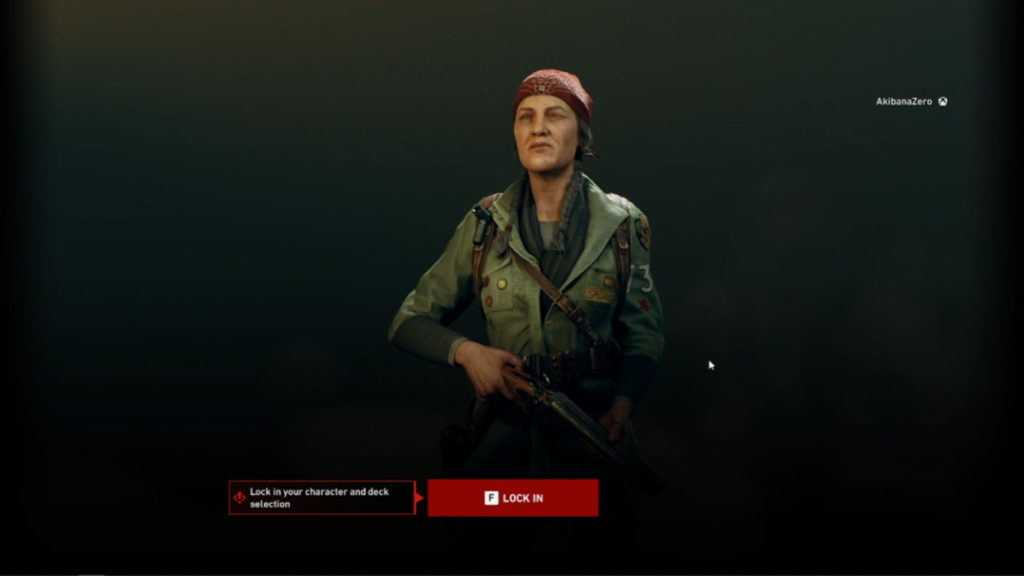 After a quick and brief cutscene, the game has you pick a character from a selection of 4, each with their own strengths and weaknesses. In some ways, this choice is what determines your starting weapon. I picked Mom, who carried a double-barreled shotgun.

Little old lady with a boomstick, what’s not to love? You also get to choose your starting card, which gives you a slight boon that can range from simple stat increases to faster reload speeds and other gameplay-altering abilities.

Once the choices are made, you can open up the door to your safehouse and start shooting ugly creatures called the Ridden on repeat. Your objective is to reach the next safehouse where you can work on your loadout and carry on to the next section.

It’s a simple structure that puts the action front and center, which just satisfies my appetite for pure, mindless fun. I attribute this primarily to the non-stop-action nature of the game.

There’s not a corner you’ll turn without seeing at least a few Ridden slumped against the wall, arising to come at you as they get a whiff of your footfalls. And the gunplay feels satisfying. Blasting enemies with my double-barrelled shotgun felt like it had a real kick to it. Sniping hapless zombies from afar felt like a little game in itself. 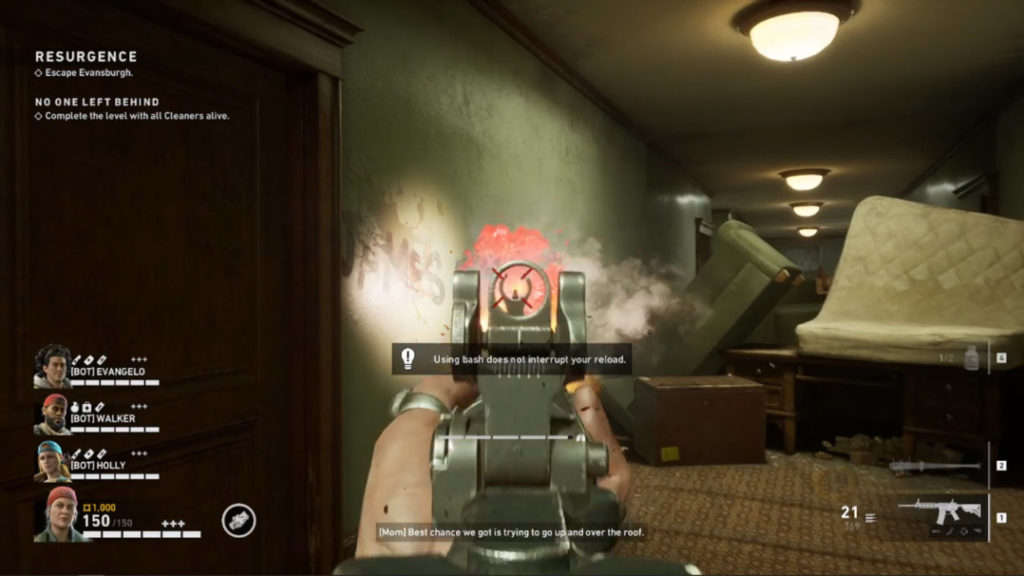 Landing multiple bursts of shots with my assault rifle felt properly exhilarating, as though I was in an action movie. And it all gets even better once you start equipping your character with a proper build.

I mentioned earlier that you can equip your chosen character with weapons and cards, which constitutes the game’s progression system. As you completer the campaign’s missions, you gain Supply Points, Back 4 Blood’s version of an in-game currency.

You can use these points to open up new slots in your Supply Lines. These are effectively skill trees that operate as the backbone of how you progress your character build. With every new unlock, you’ll typically receive new cards to add to your deck, with the occasional pointless cosmetic.

The early cards you gain are somewhat dull, with most of them granting minor stat increases, such as more health. The further down the Supply Lines you go, though, the more interesting the choices these cards pose. For instance, one card could give you a massive boost to reload speed at the cost of being able to aim down sights. If you’re a double-barrelled shotgun enthusiast like me, this card is pretty huge.

The complex choices offer up by the more complex cards are build-defining and will grant you enough enhancement to make your character broken by a certain point onwards. And that’s what’s so much fun about playing Back 4 Blood. 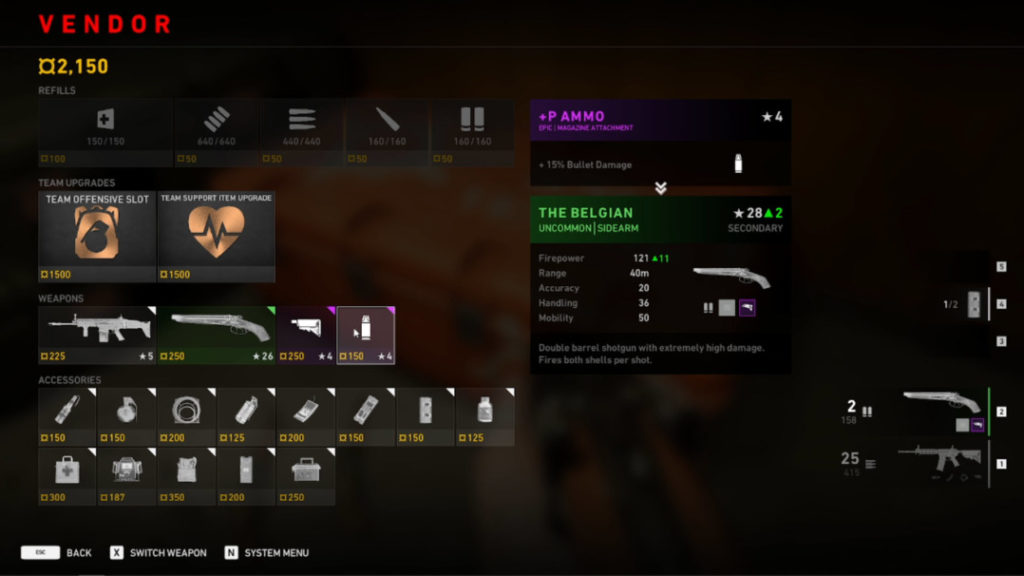 There’s no competitive mode - apart from the mindless fun of PvP where you swap between playing as humans and zombies - where you may discover a busted build that the devs will eventually have to nerf.

Having a deck of cards that turn you into an insanely overpowered monster killing machine feels like a throwback to the good old days when devs couldn’t update their games.

Once you found a playstyle and loadout that made you cackle like a maniac as you mow down NPC baddies, you never had to worry about losing it ever again. But then the game has that bland side to it that I can’t stop seeing at every turn.

It all starts with the concept of the way the world is built, and by that, I mean it isn’t built almost at all. Beyond a few brief cutscenes and some dialog while in the safehouses, you don’t get to learn much about what is going on in the post-apocalyptic world of Back 4 Blood.

If you’re thinking, “it’s a zombie apocalypse, the story is irrelevant,” you’re right. Zombie movies, TV shows, and other games have covered the broader gamut of narratives possible with the genre. My problem is that Back 4 Blood doesn’t seem to have much self-awareness about this fact.

The enemies are all referred to as the Ridden, which is a pretty out-there and abstract word that feels like it would have a bit more story attached to it. But, no. You get an inkling that all the monsters are the product of a parasite known as the Devil Worm, which is implied to have alien origins but that’s about it. What’s worse is that it takes a while for this part of the narrative to come up. 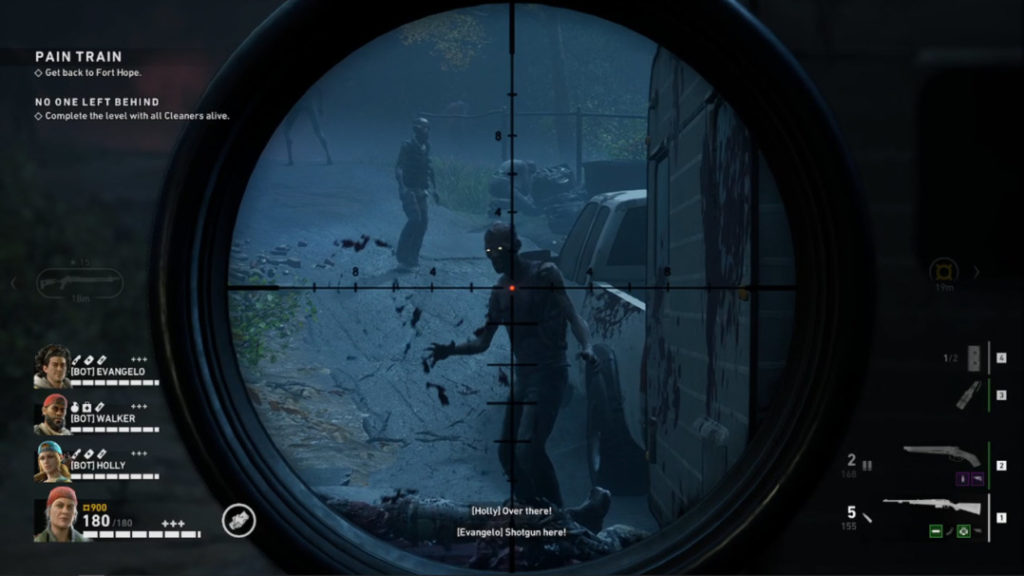 My point is, why spend the time to try and make something more out of the story and not do anything with it? No matter how you slice it, it only makes the game look less polished.

Another problem I have with Back 4 Blood is the enemy variety. There are a fair few different types of Ridden that can be characterized by their abilities. You’ve got your standard common or garden humanoid zombie types. Then you’ve got these taller ones (cutely referred to by the cast as Tall Boys) that have one massive arm they swing around that can come in three or four different flavors, each with its own unique abilities.

The same applies to the giant fat monstrosities with some exploding into poison clouds. What the issue is that these enemies can all be categorized by their game models. Unless you have a grasp for the subtle differences in appearance, you can only be sure what type you’re dealing with based on what your companions say.

It’s effectively like only having 4 or 5 different enemies when in fact, there are a lot more. Speaking of companions, this is where Back 4 Blood honestly had my blood boiling.

If there’s one thing the game wants you to get through your thick skull is that it’s a co-op game. You’re meant to gather your friends or use matchmaking to jump into some zombie-killing action together. If you feel like slumming it on your own, though, you can play solo, and the game will fill out your team with bots. They’re shockingly competent, too, even in the higher difficulties where the hordes get really nightmarish. 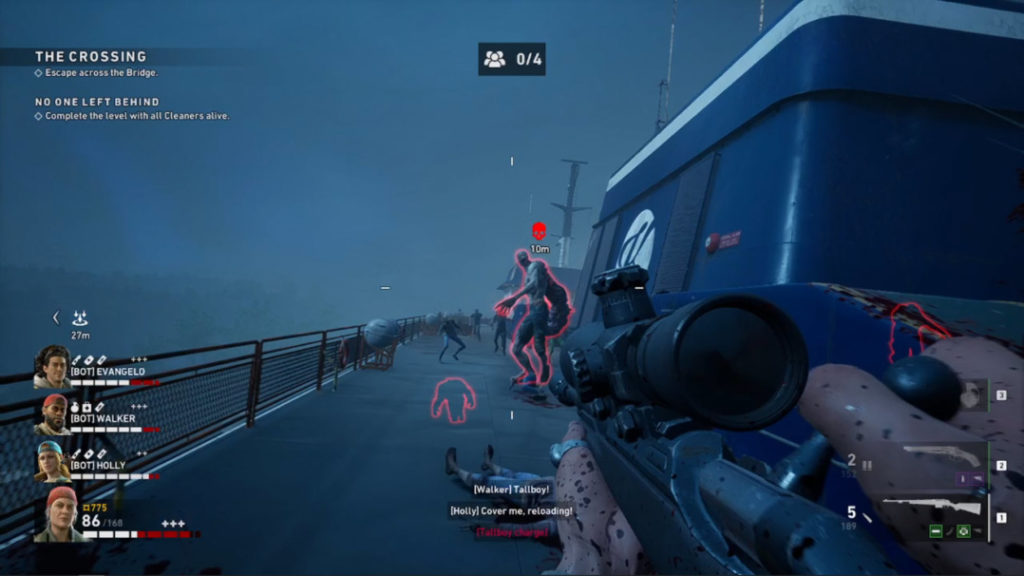 Overall, it’s a pretty good system until you discover one slight caveat: you can’t earn Supply Points while playing solo. Progression is strictly tied to teaming up with others. This issue makes it so that players who prefer to play alone have no means of making better builds, and that sucks. Now, I get where the devs are coming from here.

It would be dead simple for players to just cheese their way through solo to get all the good stuff, then hop online and, in all likelihood, ruin other players’ fun by wrecking house. However, I don’t feel that’s necessarily a bad thing to allow to happen. What may be at play here is that the devs had to compromise so that you can continue your runs either online or on your own as you see fit.

Still, it’s a massive blow to the game’s fun factor, where broken builds are going to be the norm online. Think about it. You can spend hours playing with random people online and end up building a beastly character with insane reload speeds and tremendous stopping power. It will probably take you the same amount, if not more, doing so on your own with bots. 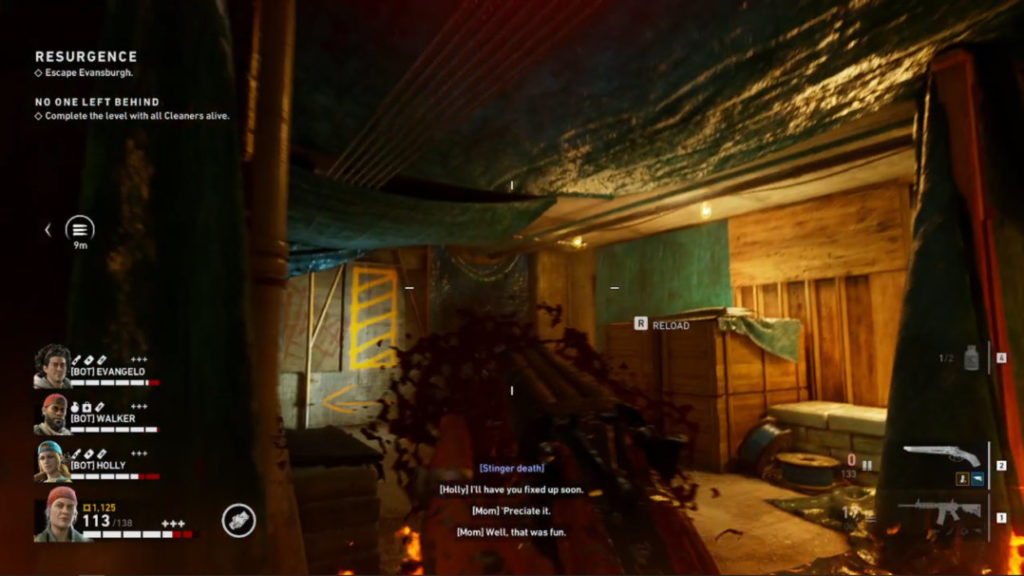 When you consider how many people go to great lengths to run Counter-Strike servers on their own computer just to kick back playing against bots, it’s telling of how sometimes we all just want to game on our own.

Playing online feels buttery smooth with minimal lag. I played the majority of my sessions through the matchmaker, and I was able to find games rather quickly. Performance-wise, I played the game on an Nvidia GTX 1050Ti card and had very few issues running at low to medium settings. I experienced a few frame drops when the hordes got a bit too large but not to unplayable levels.

In closing, Back 4 Blood has come into my life as a gaming philosophical dilemma. Do I judge a game favorably by virtue of how addictively fun its core gameplay is? Or do I critique it with extreme prejudice for lacking any semblance of character and flair? 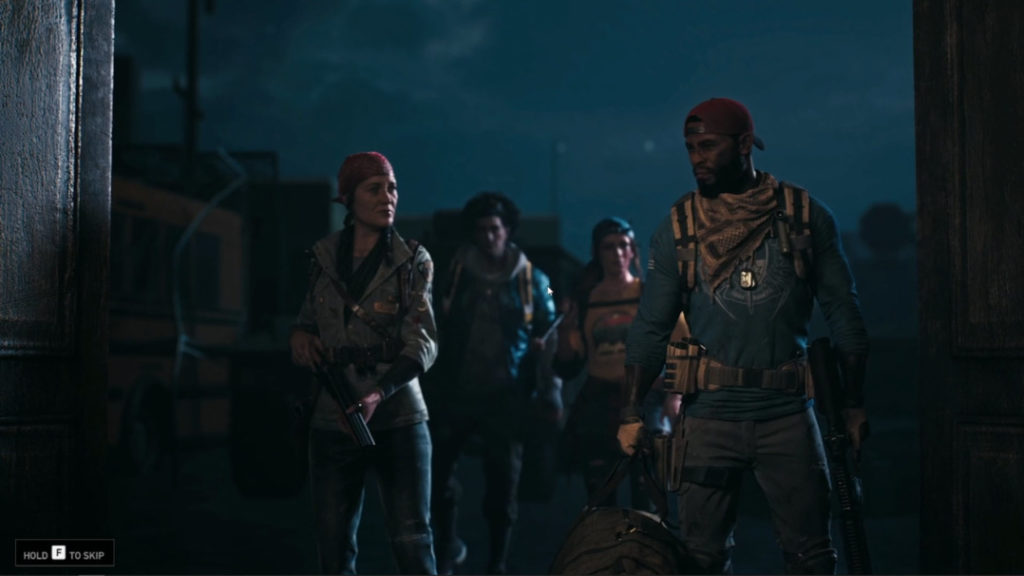 I feel the answer boils down to what we want from games as individuals. Some games beg you to take their universes with some semblance of seriousness by giving you a neatly placed narrative to follow. Others just want you to see them as the virtual playgrounds they are and have fun.

Both pathways have merit and are needed to keep the balance of the Gaming Force. If you can see Back 4 Blood as the game you boot up when you feel like you want to unwind or just play something straightforward, then it’s an excellent addition to your collection. If you’re looking for a game that has the fun but also shows that it’s been well-thought-out across the board, then I’m going to have a hard time recommending it. 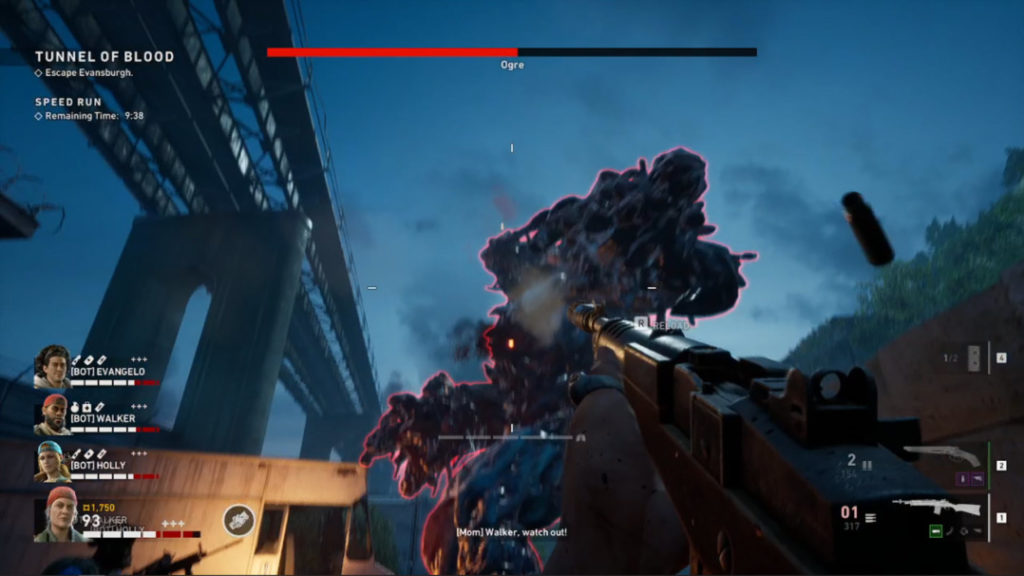 Ultimate Review Of Best Webcams For Vlogging In 2022

Ultimate Review Of Best Headphone for Swimming In 2022