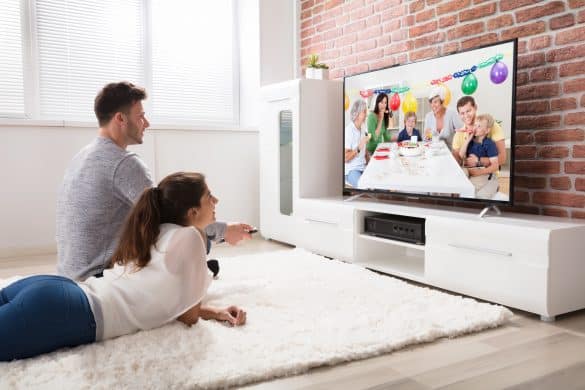 Considering buying a smart TV? You’re making a wise choice. With instant access to a growing world of online apps, a smartTV can instantly transform your home entertainment.

In today’s digitally-driven world – one in which we’re connected 24/7 – going for even a day without internet interaction is, for many, unimaginable. And this doesn’t only apply to adults either. At any one moment in time, within the family home there are kids playing online games, parents watching Netflix, teenagers surfing YouTube – all at the same time, each in different rooms.

But what if you don’t have the budget for a smartTV in every room?

In fact, what if you can’t afford a single smartTV – let alone one for each member of the family? The good news is that you can transform any TV into a SmartTV (and the even better news is that it’s cheaper and easier than you probably think).

How To Connect Your Non Smart TV To The Internet?

Before we begin, you DON’T need your TV to feature built-in WiFi in order to connect it to the internet. You DO, however, need these two things…

A TV with an HDMI port (the type of TV doesn’t matter – it can be LED, Plasma, you name it – it just needs a HDMI port)

Related: LG TV Not Connecting to Wi-Fi – Reasons and Solutions

Five Ways to Connect Internet to TV  (Without Built-in WiFi) How to connect your TV to the internet using mirroring

Streaming Device – The fastest, easiest and most feature-packed method

Media boxes/streaming devices have built-in preprogrammed apps and channels (such as the BBC iPlayer, HULU, ITV Player, Netflix and so on). This will allow the device to act as a Freeview box which hooks up to your WiFi.

The exact step-by-step will differ from device to device (so make sure you read the instructions – or hit YouTube for a visual walkthrough). However, all of them will involve plugging the device directly into the TV using either the USB port or HDMI port.

Some of the most popular streaming players include Roku, Apple TV 4K, Chromecast, and Nvidia TV Shield.

PC Connection – The oldest (and most tedious) method

A TV dongle will act as a streaming device on super small scale (they look a little like a USB). Set-up differs, depending on the dongle. The two most popular options right now include Chromecast and the Amazon Firestick. Another option includes Now TV (for which you’ll need a monthly subscription).

Each dongle comes with different apps – including games, social media and music.

Some higher end DVD players feature in-built WiFi, allowing them to connect your TV to the internet (this works out as a sensible choice if you do plenty of DVD movie watching but can’t afford a smart TV).

Most modern games consoles now come with built in WiFi (such as the PS4, and Xbox 360/Xbox One).

In either case, a HDMI cable is the best choice for crisp, clear visuals and sound.

That brings your five options to a close. Now take your pick, get your internet connected TV set up, then grab the popcorn and take a seat (you’ve got a LOT of online movies to get through!)

Hi Paul. The products to convert Coaxial to HDMI are dime a dozen. They work pretty much out of the box,-so to speak.

Here are the three i looked and liked. https://amzn.to/2TjXlTj

Hi Paul, Coaxial to HDMI are dime a dozen on retail stores and online.