Amazon Echo Show vs Google Nest Hub vs Facebook Portal -Which One To Buy? 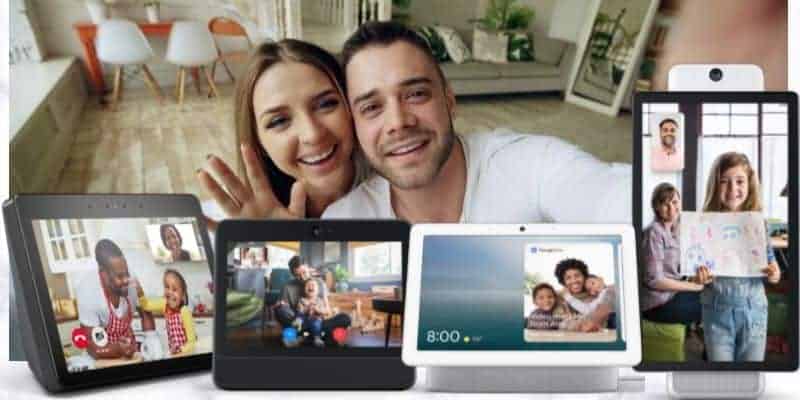 Are you looking for the best of the best smart display to purchase for your home? I know it can be a bit challenging with a wide variety of products out there.

Since 2017 when Amazon launched the first smart display, other companies have come up to produce smart displays that they claim are better and more sophisticated.

Smart displays are countertop touch screen devices that also combine a voice assistant such as Amazon Alexa or Google Assistant. They help you play music in your house, answer questions, provide you with news, and some of them feature a camera that enables you to have a two-way talk with the person on the other side.

After the launch of the Amazon Echo Show, other companies such as Facebook and Google have also come up with their smart displays. Therefore, if you are seeking to purchase the best, you might have a difficult time choosing one.

In this article, we want to take a look at three smart displays by different companies, i.e., Amazon Echo Show, Google Nest Hub, and Facebook Portal. We will break down their similarities, features, and differences so that you can have an easy time choosing one that you can buy for your home. The smart displays come with large screens that clearly offer you the best display even when you are having a video call. The adaptive displays adapt depending on the lighting in the room, which makes everything on the screen crystal clear.

They all come with voice assistants that allow you to control the devices with your voice. Facebook Portal and Amazon Echo Show use the Alexa voice assistant while Google Nest Hub uses Google Assistant.

If you are love music, then you won't be disappointed by either of these devices when it comes to sound. They all offer you a rich bass and clear audio sound that will fill your room with the sound of your favourite tunes. They come with powerful speakers that enable you to enjoy your music.

Even if the smart displays come in different designs, one common thing about them is that they are all elegant, which makes them a great addition to your room.

Let us now look at each product and see how they differ.

The Truel - For Best Smart Displays! Amazon Echo Show comes with a built-in Amazon Alexa, which can be described as the brain behind the hardware. Amazon Alexa helps the smart display to perform a wide range of tasks for you from telling you the weather forecast and allowing you to control the other smart devices in your home.

Amazon Echo Show also allows you to make calls if you are a resident of the United States or the United Kingdom. You only need to share your contact book details with Alexa to be able to place calls to mobile phones and landlines.

Also, with this smart display, you can watch TV depending on where you live. For instance, residents of the UK can watch BBC iPlayer via a web browser.

If you are love music, the Amazon Echo Show is your smart display of choice as it comes with a prominent speaker at the back. The device offers you a clear sound and rich bass that rejuvenates your house, and it is not strained even when you listen to your music or watch TV at high volumes.

It features a 10 inch HD touch screen with a 1280 x 800 resolution, which gives you a crystal clear display of what you are watching on the screen. What's more? The screen is adaptive to the light in the room, which makes everything on the screen realistic.

This device also comes with a 5 MP camera that allows you to have a two-way chat with the person on the other side through video calls.

The Amazon Echo Show smart display retails at $230, which might be a little expensive compared to other brands.

The Amazon Echo Show looks more like a tablet and comes in black.

If you are not very conversant with smart gadgets, the Amazon Echo Show might be confusing to you. It is a smart speaker that also has a 10-inch touch screen display, not forgetting it has a camera that allows you to conduct video calls. The Google Nest hub smart display features a 7-inch screen, which allows you to see your photos clearly, but it is too small for you to enjoy watching videos for a long time. The screen has touch screen capabilities so that you can comfortably control it.

It comes with a speaker that allows you to enjoy some music in your room. However, the speaker is not strong enough, and its sound quality goes down when you increase the volume.

Google Nest Hub combines and works well with Google Assistant so that you can use your voice to control other smart devices at your home, as well as to ask the device for help, such as finding out what is in the calendar.

This device features a control panel screen that helps you in organizing your other smart home devices as well as controlling them.

Unlike other smart displays, Google Nest Hub does not have a camera. In place of the camera, the Google Nest Hub has an ambient light sensor. The screen then adjusts its brightness and warmth to the light giving you a clear view irrespective of the room's brightness.

What is exciting about Nest Hub is that it connects to the internet through Wi-Fi or Bluetooth. It is also integrated with YouTube, which is the largest platform for video streaming, which makes it easier to access videos.

Google Nest Hub smart display costs around $229, which is costly though it comes with additional features and capabilities.

Aesthetically, Google Nest Hub does not have a beautiful design as compared to its predecessors. However, it does not look bad itself. It seems like just an ordinary picture frame that you can get at your local store, though.

The smart display features a 7-inch screen with touch capabilities, which makes it easy for you to control it. It also has a microphone on/off button that you can find at the top of the rear of the device. At the back of the camera, you will also find the volume control button.

The Google Nest Hub smart display is available in a variety of colours that include Aqua, Sand, Chalk, and Charcoal. Facebook Portal is the ideal smart device for you if you enjoy listening to your favourite tunes. It comes with front porting speakers and a rear woofer, which fills your home with quality sounds. What's more? The speakers are powerful enough such that the quality of the sound does not change even when you increase the volume.

To add some more fun, Facebook Portal has a bunch of filters, such as the storytime mode that turns video calls into storybooks that you can read with your children.

The smart display has a feature that allows you to disable the microphone and the camera with one single switch, which enhances its security. You can also block the camera using the camera cover for privacy purposes.

Amazon Alexa is the brain of the hardware of this device. It helps you control the smart display using your voice as well as managing the other smart devices in your home.

Facebook Portal also features a 10.2 inch HD screen with a 1,280 x 800 resolution. The large display offers you a comfortable view of the photos or videos on your screen while the high resolution makes the images high quality and crisp clear. Also, the screen is touch-enabled so that you can control everything using your fingers.

The high-resolution screen is also adaptive to the light in your room, which makes your display more realistic and professional.

It is important to note that the Portal features a 13-megapixel smart camera that can track your movement when you are making a video call, and also pans and zooms appropriately to ensure you are always in the frame. It also comes with a Facebook Messenger and WhatsApp that allows you to make video calls.

Lastly, it allows you to stream videos from several providers, including Amazon Prime Video, Starz, Showtime, Pluto TV, and many more.

Facebook Portal smart display has simple and clear settings that ensure you are always in control. If you want to, you can disable the camera and microphone with just a single switch.

The smart display has a beautiful design that will add a touch of class to your home. It is available in black and white colours, and it measures 5.91 x 8.45 x 5.0 inches.

Differences Between The Three Smart Displays

The battle here is between Facebook Portal and Amazon Echo Show as the Google Nest Hub performs poorly in so many aspects, including lack of a camera, a 7-inch screen, and does not support video calls.

In comparing the three devices, the battle is between Amazon Echo Show and Facebook Portal. The Google Nest Hub doesn’t perform highly as it has a smaller screen and doesn’t have a camera.

The Facebook Portal also performs better in terms of sound. It comes with powerful front speakers and a rear woofer that ensures you get quality sound.

With the 13-megapixel camera, you get better quality and clear video calls.

The Blue Line of Death  On PS4— The Many Possibilities

What Is USB Type C? Everything You Need To Know