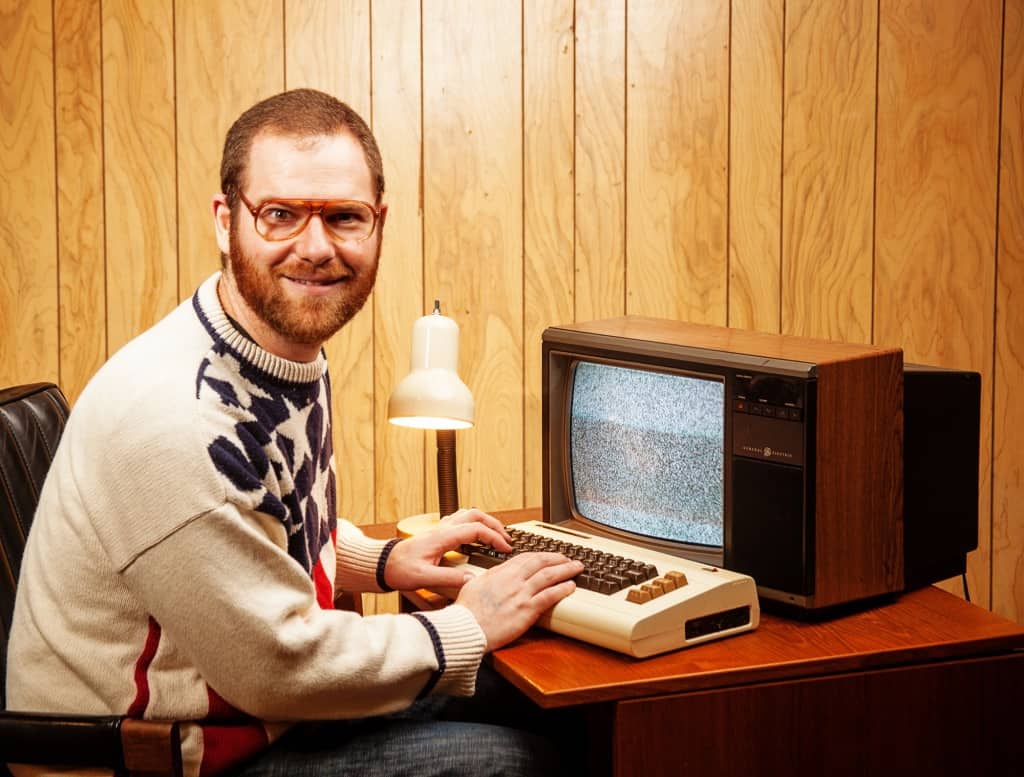 In the mid-to-late 20th Century, older model computers were often discarded as newer, more powerful machines were released. A few forward-thinking people (or pack rats) held on to some of these old computers thinking they might be valuable collectors items one day. Fast forward to 2019 and their assumption has proven true. Some of the first computers are now being sold to collectors for prices upwards of $10,000. If you enjoy weekend garage sale treks or thrift shop hopping and you happen to see an old computer on your journeys, you could potentially pick up a $15,000 antique computer for pocket change! Here is a list of some of the more valuable collectors pieces.

- This computer would hardly register as a computer by today's standards. It was originally offered as a do-it-yourself kit and didn't even employ the use of a monitor. The front panel of the computer contained switches that needed to be toggled according to the microprocessor's instruction manual in order to create a program. The position of these switches would be "deposited" into the computer's 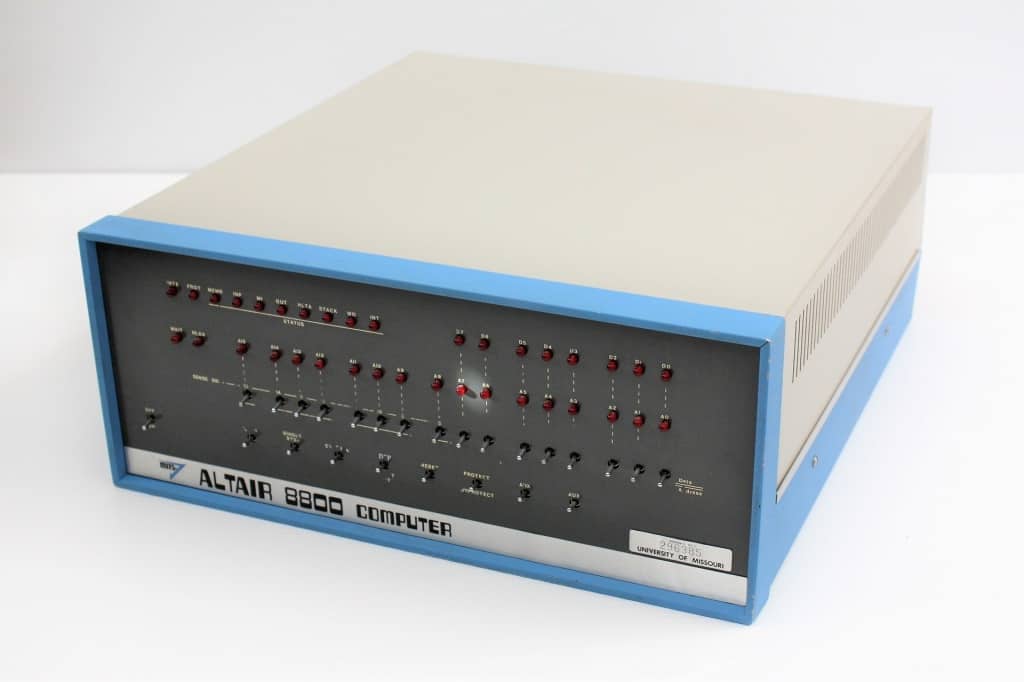 memory until the painstaking programming work was completed, finally resulting in a working computer program. The Altair BASIC language was created this way, and that language led to the creation of a little company called Microsoft. This antique machine can be worth up to $5,000!

- The first commercially successful "minicomputer" was designed by a company called Digital Equipment Corporation (DEC) and was sold new in the mid-1960s for a whopping $18,000! This system included a large (by today's standards) rack-mounted computer, paper tape storage device and offered memory of 4,096 12-bit units. Paper tape-based operating systems, utility programs, and programming languages were developed for this machine. As the 1980s approached, DEC refused to price their PDP-8 computers competitively and quickly became obsolete. The current value of this rare computer can range from $5,000 to $50,000 depending on condition and included accessories. 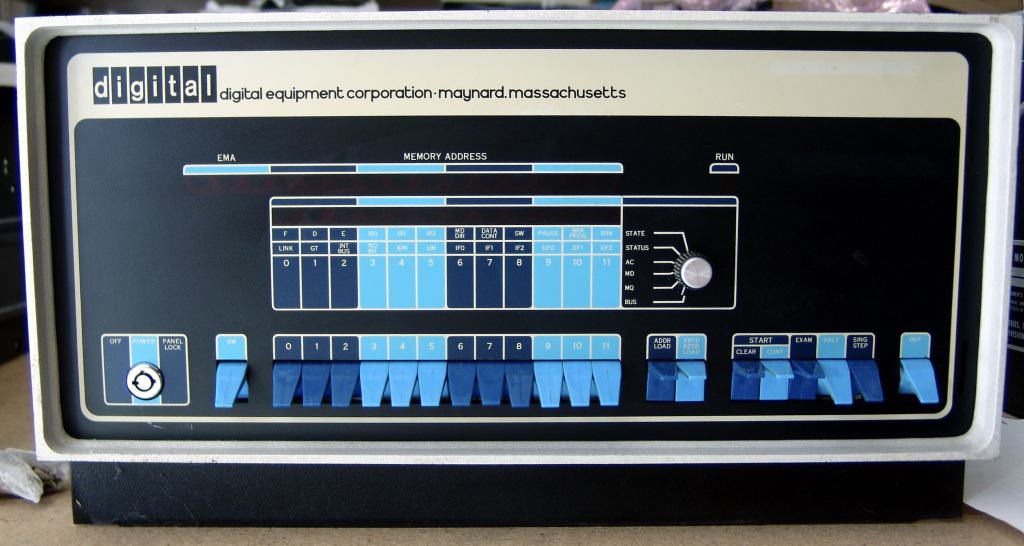 - This is one of the first computers to actually look like an actual computer by contemporary standards. It sported a video monitor, a QWERTY keyboard, and a single platter storage disk which stored an unprecedented (at the time) 2.5 megabytes of data. Full units, however, cost a buyer up to $100,000 (in 1973)! The Xerox Alto's most impressive feature was its graphical user interface or GUI. This feature served to simplify computing tasks. Programming became much easier and programs could be accessed and run directly from the computer monitor. In the late '70s, Steve Jobs made a deal with Xerox in order to borrow some of their concepts. This resulted in, among other things, Apple's Macintosh operating system. Today Xerox Alto computers are worth $20,000 and up. 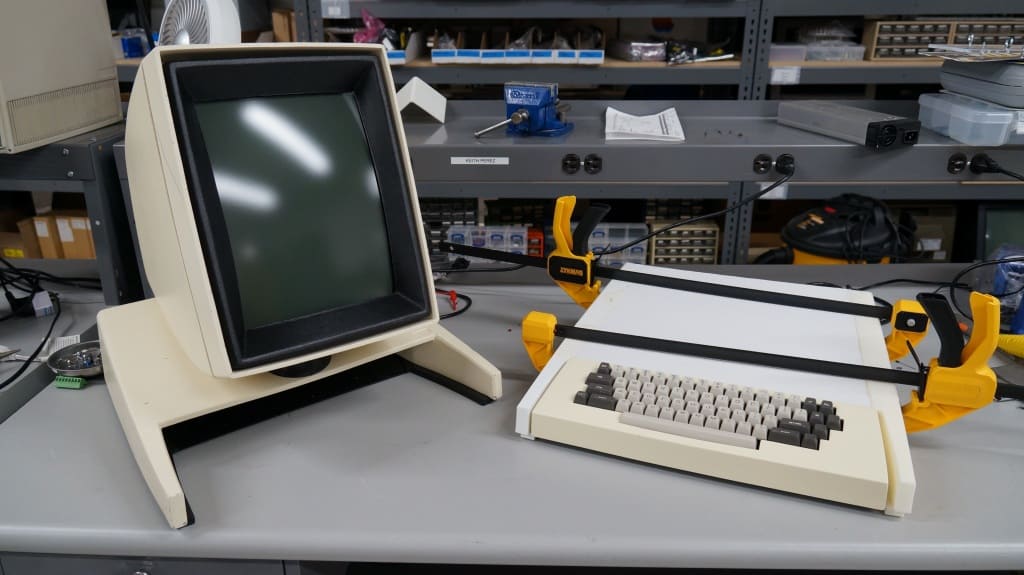 - In 1976, Steve Wozniak designed his first computer. With the help of his friend, Steve Jobs, he produced a working model and presented it to the world. Only 200 units were produced in total and only a handful of those remain. Even fewer are still in working order. A non-working model recently sold on Ebay for $60,000. In 2014, a workingApple 1 sold at an auction for over $900,000! Probably the most sought-after collectible computer in the world, the Apple 1 utilized BASIC programming language directly from the read-only memory (ROM) and was designed primarily for games. This computer was the first personal computer as we've come to know them today. 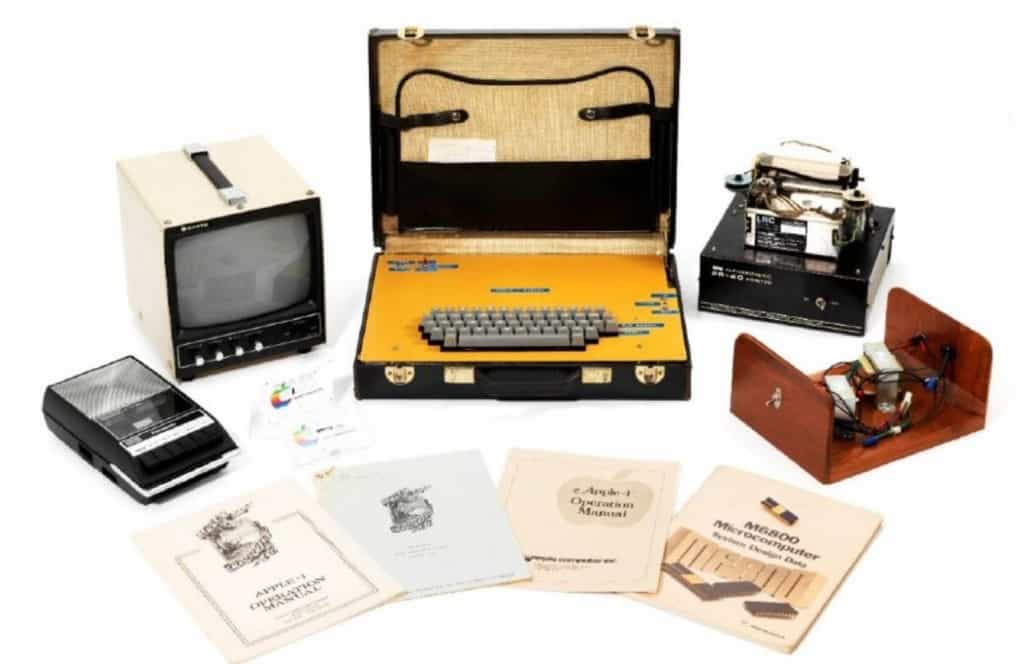 - Manufactured by Commodore in 1977, the PET 2001 was a precursor to the famous Commodore 64. This was the first PC made available to retail outlets, and among the first to include keyboard, computer, and monitor together as a single unit. The original PET 2001 model (later versions are now worth less money) included a small chiclet-style keyboard and a tape drive that used regular cassette tapes (remember those things before CDs and MP3s?). The built-in monitor was a blue monochrome, 40 X 24 text screen. A working PET 2001 now sells for around $500 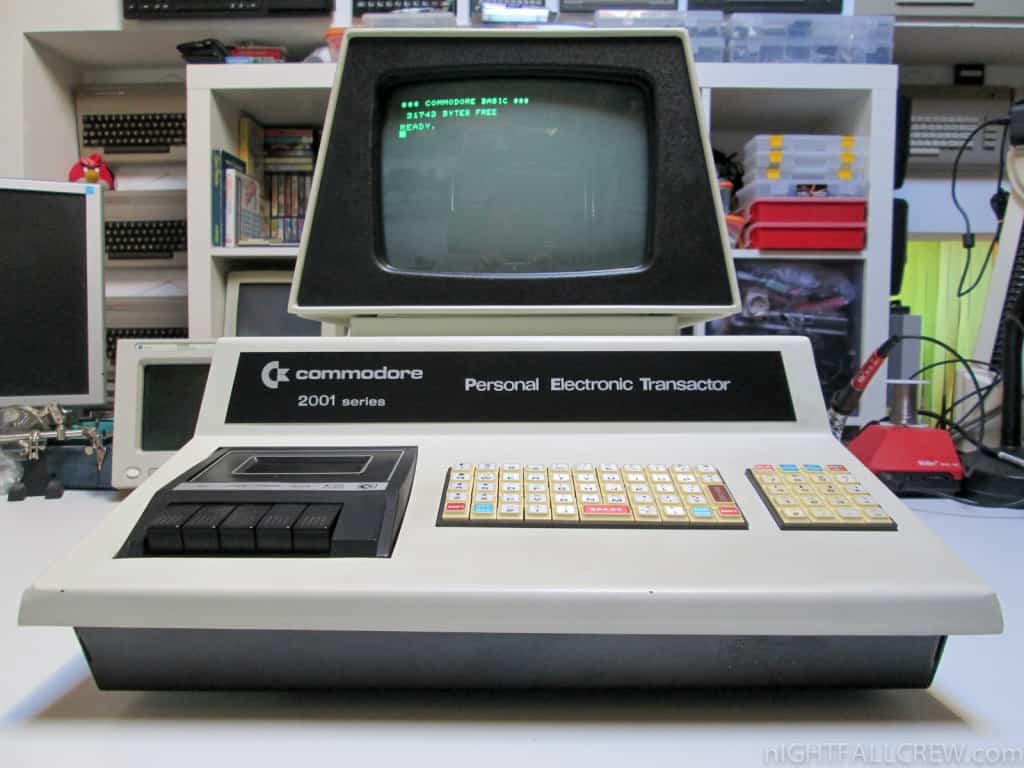 - An abbreviation for Tandy/Radio Shack Z-80 Microprocessor, the TRS-80 was one of the first personal PCs offered for sale to consumers and was exclusively available in Radio Shack stores. It's popularity increased fast and passed up Apple II several times over in number of units sold. More software was made available for the TRS-80 than any other computer in the industry at that time. It sported a cassette tape drive and a black & white TV converted for use as a computer monitor. Later, Tandy would introduce disk drives, hard drives, and color monitors as upgrades for the TRS-80. An original unit in working order will set you back about $600 in today's market. 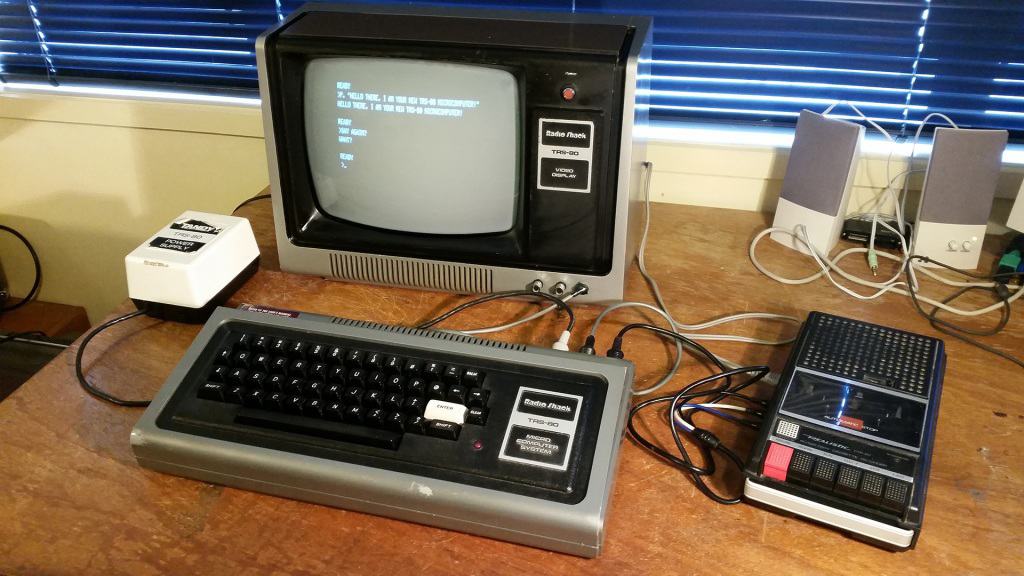 - The portable Atari Portfolio computer made history as being the world's first commercially successful palm-top computer. It was extremely versatile, being a PC-compatible, MS-DOS-based computer and offered a memory expansion slot, an optional parallel port interface, a customized DIP operating system designed specifically for palm-top functionality, and a 240 X 64 pixel LCD display. This computer can be seen in the film Terminator 2: Judgment Daywhen John Connor hacks an ATM at the beginning of the movie. The Atari Portfolio can fetch between $200 and $400 in today's collectors market depending on its condition. 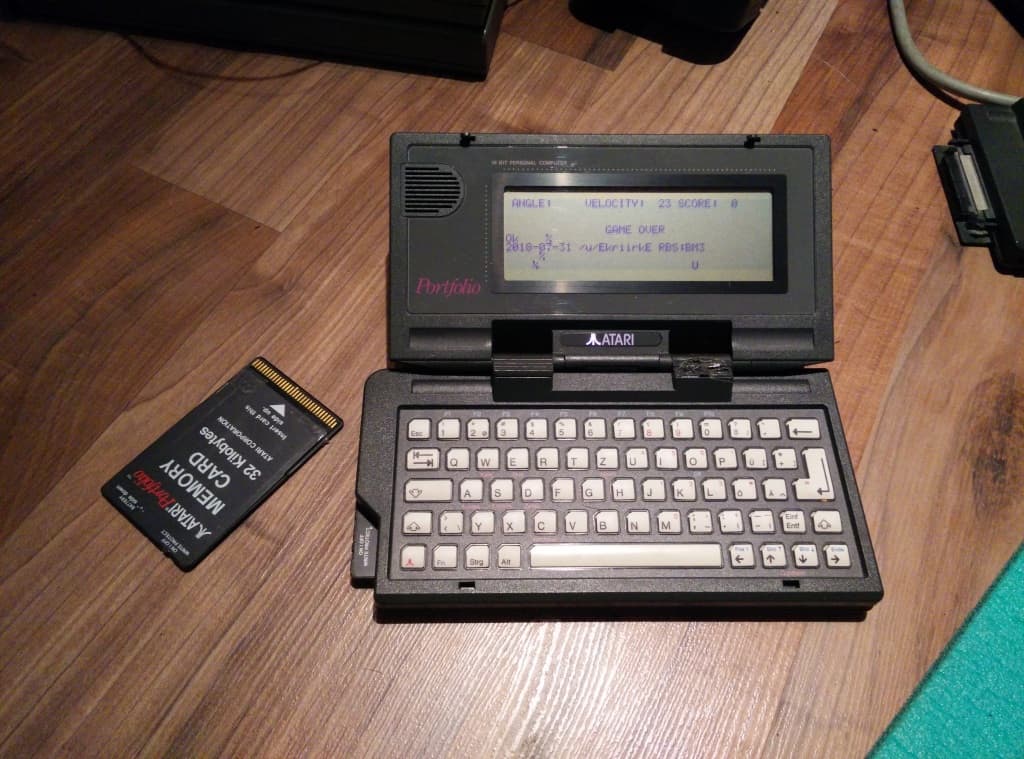 - This suitcase-style Apple computer was revolutionary in many ways but was commercially unsuccessful due to its extremely high retail price (upwards of $10,000 in 1983!). The most advanced feature of the Apple Lisa was its graphical user interface-based operating system. This GUI feature would later be replaced by the Macintosh OS, which spurned a new age of Windows-like, user-friendly operating systems. An Apple Lisa is worth less today than it cost brand new in its heyday. However, it is still a valuable collector's piece and a working order model in good condition can still cost upwards of $2,000. 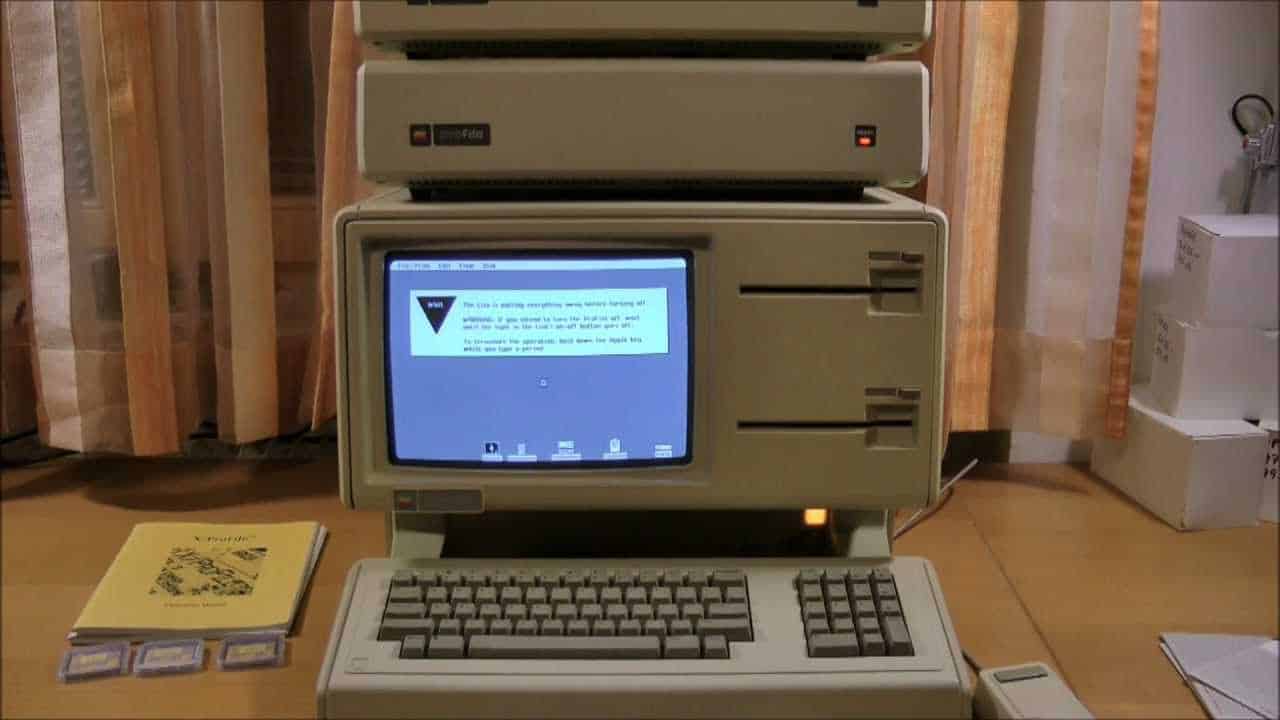 - This was the very first IBM personal computer. The IBM PC started a revolution which would result in most computers (with the exception of Apple products) identifying themselves as IBM-compatible PCs. Released in 1981, the 5150 included a full-sized keyboard, an upgradeable hard drive, a monochrome monitor, MS-DOS operating system, and a floppy disk drive. You could easily add a modem, a printer, and several other accessories to your PC if you wanted. This computer set the standard for standard features and upgrade options in PCs. $400 to $500 can get you one today in working order from Ebay. 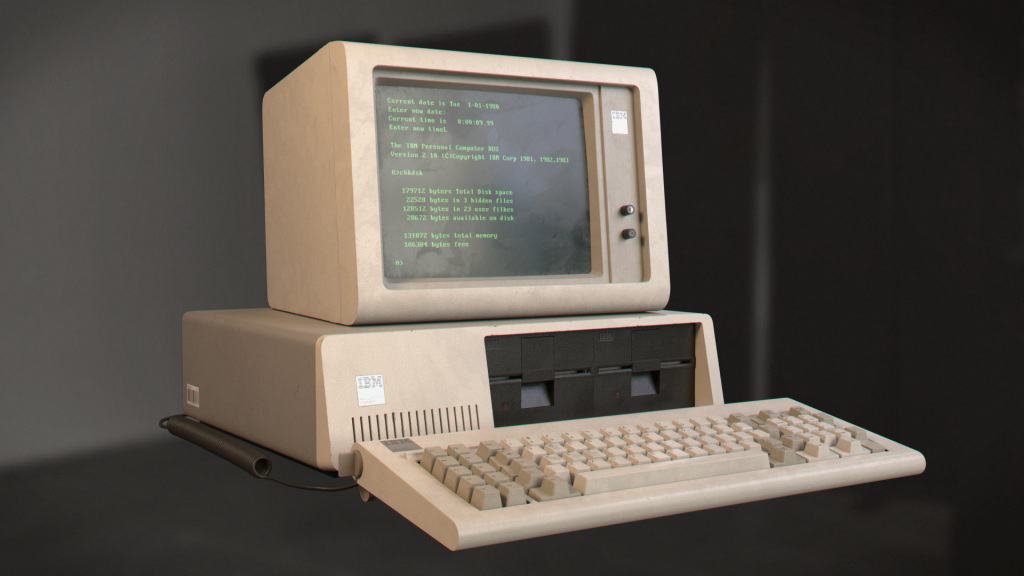 - Owners of the Atari 2600 game system who wanted to own a BASIC-programmable computer could do so without needing to purchase an expensive, separate computer unit. This Spectravideo product included a specialized game cartridge and a keyboard which plugged directly into the 2600 unit. Once attached, the Compumate turned the 2600 game console into a full-fledged computer with BASIC programming capabilities. These units originally sold for $100 and can be purchased now for about the same price, although they are next to impossible to find. 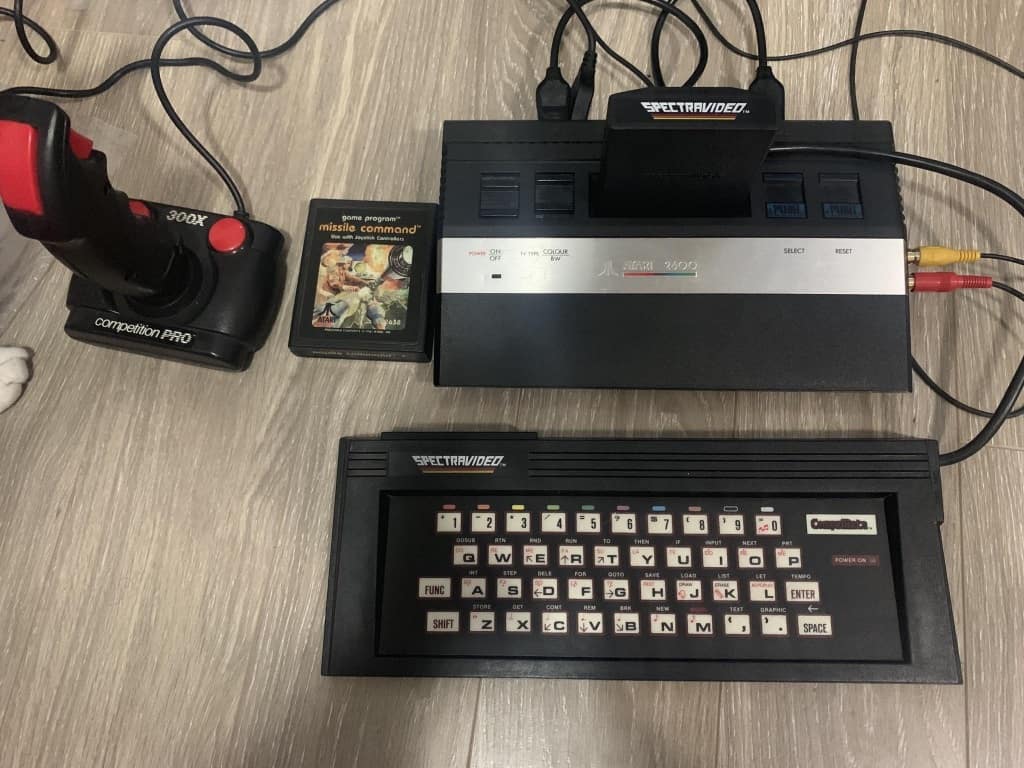 - Released in 1982, this rare collectible was essentially the first laptop computer. A die-cast metal frame and a bright orange, electroluminescent display made this a very rugged, attractive-looking computer, even by today's sleek standards. It was rather pricey ($8,000+ new) and was used mostly by the high-profile business executives, the U.S. military, and even on the Space Shuttle during the '80s. The Grid Compass had its own, non-DOS, menu-based OS and included a modem for communication purposes. It also used "bubble memory" in lieu of having removable drives or storage media. Data could be saved indefinitely in bubble memory even without a power source. Grid Compasses are extremely hard to find and can set a collector back $3,000 or more.

The next time you go garage sale hunting on a Friday or Saturday morning keep your eye peeled for really old computer systems. Some of the oldest computers don't even look like computers to the untrained eye, like the Altair 8800. There's a good chance that people who have these items sitting in their garage or attic have no idea what they're actually worth to collectors.

*All pictures are copyrighted to their respective owners.

Rethinking Online Security: How Safe Is Your Online Data?

Apple II GS with memory cards and extra chips, books, etc. Apple IIc Plus with applied Engineering memory board. Disks, programs, etc.
Many other items. ex. All free. Come pick it up or pay for shipping Southern California

Curious , does anybody know the value of a working E-Mac ?

Also curious – does anyone have insight on Sphere 1 computers?