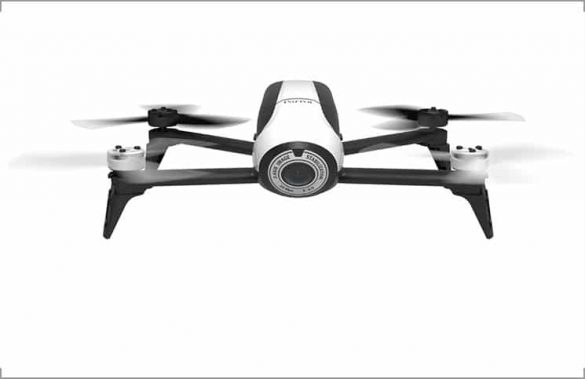 The Parrot Bebop 2 Quadcopter is an exciting new drone from the well-respected Parrot brand. The Bebop 2 has a a unique build that confirms it’s a premium brand of drone. It has a thick oval white body casing, with a camera facing forward, four arms with rotors — two black and two white — and four short black landing legs.

This drone can travel to a further distance to capture amazingly clear crisp full color video images. You’ll feel like you’re actually flying a real helicopter, and its style and power will impress you.

From our first glance of the Parrot Bebop 2 we can see how this design is both lightweight and compact. One thing that stands out is that you’ll be able to focus more on the fascinating live streaming aerial footage to your smart device, rather than trying to fiddle with the controls. In fact, you’ll be controlling the Parrot from your smart phone or tablet, unless you purchase an additional radio controller.

Unlike other models of the Parrot which the beginner may have been hesitant to fly due to their costliness, the 2 has a durable build which will stand up to any accidents.

It’s built with a strong and flexible middle body casing that bends and adapts if it bounces against any surfaces. Its four single arms are reinforced for protection. At the top of each arm is a propeller.

These blades have been designed for safety consideration. Not only are the propellers flexible, but they will also lock up if they make contact with trees, buildings, or walls. This will prevent further damage to the quad, or surfaces.

It has an impressive twenty-five minute battery life, which has previously been unheard of in the most popular brands of quadcopters. Generally battery life runs about ten minutes, with a few models at fifteen minutes.

Most drone pilots will be excited to get some real drone flight time in, and be able to send their Parrot out to farther distances to capture some great video, without having to worry about power running low.

The Parrot Bebop 2 handles visibility a different way than other drones. It has a large square LED light on the rear of its body. It’s also perfect for when you wish to fly your drone when it’s dark outside.

Besides the amazingly longer flight time of the Parrot 2, there are some other great new features that make this model stand out from other models in the Parrot brand.

The radio controller function will be able to keep in contact with the Bebop 2 to a distance of 300 meters.

With other toy quadcopters you’re stuck flying your drone at only times of the week when it’s nice and sunny out. But with the Parrot Bebop 2 you can fly in all sorts of conditions. You can fly your drone if it’s freezing cold outside, misty and cloudy, windy, and extremely hot. You’ll probably still want to park it during heavy rains though.

You’ll use the accelerometer and the touch controls on your smart phone screen as a flying interface. This will allow you to control the movements of your Parrot, as well as to control the camera movement and to take snapshots.

To control the camera you will use the smart phone or table touch pad screen. You’ll have a 180 degree view of what the camera is seeing live. On the screen you can pan up down or around, to have live streaming video. The controls are at your fingertips. On the screen are two circular “joy sticks”. They are controlled by simply moving your thumb around.

Besides being able to control the camera with your smart device you’ll be able to actually fly and control the movements of your drone too. It will be simple to pilot your Parrot 2. The controls are intuitive, so they’ll quickly figure out what you’re trying to accomplish.

The app works on both the iPhone and the Android. You can download the app for free on the App Store, or the Google Play store.

Even if you’re not a photographer, the Parrot Bebop 2 will allow you to capture amazing film footage or photographs. This drone gives you a chance to shoot professional quality footage of wherever you choose to fly your drone. Capture beautiful images of mountains, lakes, rivers, and the countryside. It’s a great way to preserve the fun you had outdoors, and a great souvenir of your vacation travels.

The Parrot has a built-in camera with fish-eye lens. This lens captures brighter light and better clarity, even when filming conditions may be a bit dull outside.

One of the unique features of the Parrot Bebop 2 camera that makes it stand out from the crowd is the way the camera has been built into the base of the drone, which allows it to film vertically. This neutral angle of the camera will film more footage of the activities or scenery on the ground, and less of the sky.

One concern when taking video footage in the air is whether the video will be smooth and stable, and free of blackouts and bouncing images. The Parrot Bebop 2 is built with a digital three axis stabilization system. This enables the video to be stabilized, providing smooth, clear aerial footage, no matter what moves your drone is doing in the air, or if you have been a bit clumsy at the controls.

Buy the Skycontroller for an amazing flight experience

While you can control your Parrot through the use of your smart device and the app, you can also purchase the additional Skycontroller for a more authentic flying drone experience. While the app makes it easy for anyone to fly, for flying pros, they’re going to want to give the Skycontroller a try.

The Skycontroller is a high end remote control, just like a radio controller, with the joysticks and trim levels and everything else you’d want in a pro drone.

Using the Skycontroller will allow you to take your drone out on longer flights. You’ll be able to fly your drone out to a distance of two kilometers. You may not be able to see your Parrot Bebop 2 in the distance, but as you watch the live streaming video you’ll still be in full control of your device. And, if there are any issues, you can simply return your drone back to starting position again.

You’ll also be able to take full advantage of what the Parrot Bebop 2 can do. Beginners may be happy with the app, but the pro will definitely want to purchase the additional Skycontroller. You can always choose to purchase it later too, once you have a handle on flying your new Parrot Bebop 2.

Specifications of the Parrot Bebop 2 Quadcopter

The Parrot Bebop 2 weighs only 500 grams, even though it appears to be sturdier than that.

You can download photographs in .jpg, raw, and .dng photo formats. The camera will shoot video at thirty frames per second. The video footage filmed will be stored at a resolution of 1920 by 1080p. Video encoding is H264.

All of the photographs and film footage are stored on the camera’s internal flash storage system. It can store up to eight gigabytes.

Inside the box you’ll get one Bebop Drone 2 with built-in 2700 mAh battery, a charger unit that includes a cable and adaptor, one USB cable, 8 propellers, one propeller assembly tool, and one quick start guide to get your started.

You’ll also be able to purchase additional accessories such as extra batteries, the Parrot Skycontroller, and extra rotors. You can also buy a backpack which will protect your drone during hiking and travel.

The Parrot Bebop 2 will probably cost you around $1000-$1200, but it’s well worth it, with amazing flight stability, and a professional-quality camera, that would cost you that much if you purchased separately anyway. Parrot continues to prove that they’re one of the best manufacturers and designers of quadcopters with their new Parrot Bebop 2.

Parrot had built the Bebop 2, recreational Drone
that can stay in the air twice as long as the previous version. The 500
gram drone has 25 minutes of flying time and you control it from your
phone, tablet or even a VR headset. You can also purchase the parrot
Skycontroller, which enables extended Wi-Fi range.

The bebop 2 surpasses the first iteration with its speed. It can go 37
miles per hour horizontally and 13 miles per hour vertically. Engineers
told us a key difference in performance between the original bebop and
this iteration is the drone’s ability to withstand wins. It can resist
head winds up to 39 miles per hour.