Minecraft Dungeons: What We Know So Far 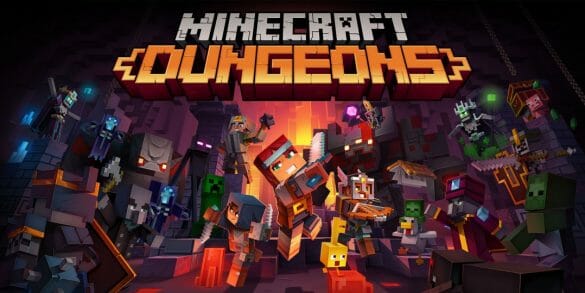 We explore everything there’s is to know about Minecraft Dungeons in today’s post. Let’s get started…

Minecraft Dungeons follows the same aesthetic of the main Minecraft game, but it’s going to be a completely different experience than the open-world blocky world we’ve been used to since Minecraft launched in 2009.

Everything that we know about Minecraft will be in the back of our minds as we explore this dungeon-crawling roleplaying game that is only sharing the Minecraft name and almost nothing else as far as gameplay is concerned.

You can’t throw a ball into a crowded room without hitting someone who has heard of Minecraft. Minecraft is an extremely popular game where the basics of the gameplay is breaking blocks in an almost endless world.

What you do with those blocks is almost completely up to the player. You can also use the blocks to build giant creations. There are a couple of different modes when playing Minecraft. One mode in Minecraft is called Survival mode and the other is Creative mode.

They also need to start off with a crafting table where they can make more advanced recipes. Of course, Minecraft also has a day and night cycle that comes with a different set of monsters the player encounters during the day and ones that only spawn at night.

The monsters that spawn at night can also appear in dungeons and underground caves. They can also survive in the shade under trees or can survive when it is raining, so the player needs to make sure they’ve crafted a sword and other tools used for defense.

After the player builds the very basics in Minecraft, the player then proceeds to go spelunking in caves or ravines where they can look for more valuable minerals such as gold or diamonds. The player then takes the resources back to their home and smelt them down or uses them directly in crafting recipes to make tools or better armor.

Diamonds are the best resource that a player can find because diamonds are more durable for tools and diamonds. Having diamond tools allows the player to go deeper underground and fight off even stronger monsters. Diamond tools also allow the player to collect obsidian that is used to bring users to a part of the game called the Nether where they can collect even more resources.

The player must locate a Nether fortress where they find a monster called a Blaze that they can kill to make potions at a brewing stand. Having potions help the player get to the end game of Minecraft once they find the End Portal. However, finding the End Portal could take days or weeks depending on how often the player plays and how lucky they are with finding resources.

The player needs to face off against the Ender Dragon to officially “beat” the game. Since the release of Minecraft, survival mode has added bigger and badder bosses such as the Wither that the player can face, but what if a player just wants to build without the pain of collecting resources or fighting monsters? Well, Minecraft also has a survival mode.

Minecraft also has a creative mode where players who don’t want to play the survival mode can create magnificent structures without having to worry about running out of resources or running into monsters. Players in creative mode also don’t have to worry about their health or eating food to keep their hunger bar up.

Simply double-tapping the jump button allows the player to fly through the air, through water, or underground while instantly breaking away blocks. Players who are playing creative mode cannot die either. These players can sink into lava, and even though they have the burning animation, they are not actually taking any damage.

Minecraft also has an educational edition for children. Minecraft created a version that is only for a classroom that can be used for by teachers for educational purposes. This helps children build projects under the supervision and guidance of a teacher and also helps build confidence among children.

The combination of gameplay and accessibility are some of the reasons why Minecraft has become so successful, but why else is it successful? How did its success bring upon many spin-offs including this upcoming Minecraft Dungeons title? Let’s take a look at what made Minecraft so successful.

What Made Minecraft So Successful?

One of the biggest reasons Minecraft became so successful so fast was how easy it was to use. Players could play in survival or creative mode and be as creative as they want. It wasn’t just about using blocks to build structures, but the addition of redstone allowed players to build circuits and other working electrical devices in game.

Keeping a player busy is another reason why Minecraft has become so popular. Players could play for hours and still have so much to do. Minecraft is almost never-ending. One could essentially play for days and be nowhere near where they want to be in Minecraft.

Some people take years to build their projects. There’s just too much to do in the world of Minecraft, and that’s why. The spin off title we are especially interested in is Minecraft Dungeons.

What Is Minecraft Dungeons?

The Dungeon Crawling game genre is not a new genre for those who are familiar with games like Diablo. It’s basically a roleplaying game where you move through different map layouts and get loot.

The whole point is going through each and every dungeon so you keep leveling up your character so you can take on more and more waves of enemies. Dungeon crawling has found its way into a lot of games because of how fun and popular a dungeon crawling aspect can be.

Finding loot after defeating a lot of monsters makes games fun for some people. That’s why Minecraft Dungeons is entering that genre.

Minecraft dungeons is going to be using Unreal Engine 4 and actually takes a lot from Diablo 3 as far as dungeon crawling is concerned. You can go at it alone or you can explore the game with friends as you level up your characters.

Of course, what is a new game without new elements to the game. It isn’t just going to be a top-down version of Minecraft. There is going to be new stuff such as having a llama companion.

Minecraft Dungeons also looks to have a basic story, since it’s mostly marketed for children. The story for Minecraft Dungeons will also have a lot of humor since that’s what Minecraft has been known for across multiple media platforms such as its movie on Netflix that allows you to play through the movie and make your own choices.

Mojang looks to focus on the combat and story progression to really have the player connect with the character they’re playing as they move through waves of monsters.

One of the best parts about Minecraft dungeons is the fact that you can also play with other people. There is also rumor that Minecraft dungeons will also have some kind of couch co-op, a cooperative mode that hasn’t been around much since the advent of online gaming.

Of course, the more people you bring in to play with you, the more difficult the game will be as it will force you and your friends to cooperate with each other.

However, you’re not going to be able to just punch down a tree and get started in combat. It’s going to be much like Diablo in the way of combat where you can choose a mix of different playstyles to take down big waves of enemies. You can choose a hammer, sword, axe, bow, or even crossbow to fight off enemies.

You could also make use of abilities that cost resources to use. Some abilities were shown in trailers similar to magic used in Diablo. Mojang has confirmed that there are going to be over 60 different types of weapons in the game, so there’s going to be a high level of customization.

These weapons and artifacts, and even armor, can be upgraded with enhancements. You get different enhancements as you progress through the game, as you would any dungeon crawler.

Unfortunately, those who are familiar with Minecraft will be sad to learn that there won’t be any building or mining in the game, despite its name. You just need to keep progressing through the game and fighting off any monsters.

However, Mojang has confirmed that there won’t be any microtransactions or loot boxes in the game. Everything that you get in the game can be looted off of chest or enemies as you’re progressing through the game. This is welcoming news for those who are tired of the microtransaction aspect of newer games.

Every dungeon in Minecraft dungeon will feel like it’s a new dungeon that is procedurally generated to make each dungeon feel like it’s not the same as another dungeon before. Mojang has also talked about letting players create worlds that they could play in much like the randomly generated seeds found in the original Minecraft title.

Minecraft Dungeons will release on Windows, PlayStation 4, Xbox One, and the Nintendo Switch on May 26th, 2021.

How To Clean A Water Dispenser In A Fridge