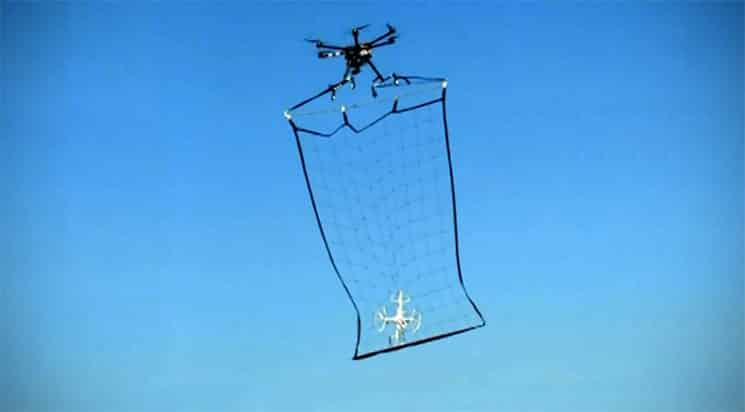 One of the concerns of flight administrations around the world is that rogue drones could be used as for mischief. Since they’re so compact, and becoming affordable, it’s possible that this will allow them to be used for nefarious activities. According to one company in Tokyo, the solution is simple: a law enforcement drone that can trail a long net through the sky, which will trap the rogue drone. It’s a relatively simple solution to a puzzling problem.

Tokyo has formed an anti-drone squad which will be used to apprehend bad drones. Initially it was thought a dragnet on the ground might work, but since many drones can achieve high altitudes, it was decided that only another drone can tackle the problem.

The police drone can scoop up the suspect, and carry them off to a safe location. While many may think they only have a use for children who are flying their drones at the airport or military facilities, this police program is being created for more serious purposes.

Last April, they caught a drone carrying radioactive material on the roof of the Prime Minister. This raised the alarm that drones can carry other sorts of harmful packages, such as bombs, grenades, or guns.

It’s believed that the Tokyo police are testing with a DJI Spreading Wings 900. Below it trails a three meter long by two meter wide net.

The very nature of flying drones can be their downfall. Their four turning rotors can easily become entangled in trees, clothing, and a net.

Should the police see a drone flying in the air, the police drone will fly up into the air and scoop it up into the net. Further testing is to be done. The plans are to build up a fleet of ten drones that will be responsible for guarding ten different government buildings, and they’ll be in full operation by next February.

Flying drones can be purchased from a variety of retailers. Police are concerned about their availability. Many hobbyists are also customizing their toy drones. While most are being repainted, or having toy cannons and cameras attached, many worry about harmful payloads. Today, a bomb need only be compact — just examine the post-911 story about the man who carried a bomb in the heel of his shoe.

And drones may not just be used to carry harmful materials, the potential to commit other crimes is high too: robberies, vandalism, and theft.

Many other countries have also been testing their own police drones.
Earlier this year France announced its anti-drone flying drone that can triangulate the location of where a drone pilot may be hidden. Instead of taking down the drone, law enforcement personnel can head straight to the pilot.

What will the Tokyo police call their new anti-drone program? SkyNet?...
It’s seems as though the cooler the flying drones get, the more law enforcement agencies want to take them away from us.