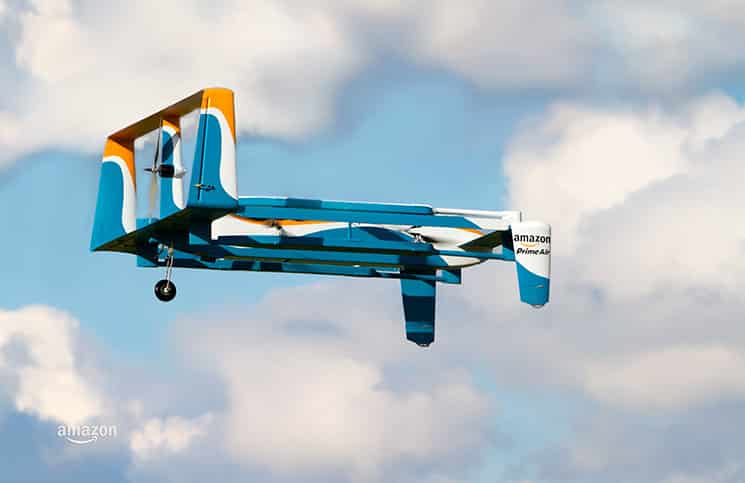 For the past year or so we’ve been reading about Amazon’s testing of their new delivery drones. While the program utilizes the latest drone technology, many Amazon buyers were left wondering how exactly this program will work. With all the obstacles in the way, how can Amazon get delivery drones in the air, and where exactly can they land?

Many fans of the Amazon site order their products, and have them delivered by their local postal services. These items arrive in trucks, and either are placed in mailboxes, left on the door step or handed directly to the customer for a signature. How will a delivery drone be able to tackle all the steps necessary to deliver products to the customer’s satisfaction?

There are many hurdles in the way of fully functioning Prime Air drones. Amazon continues to tackle each one at a time. Originally they tested products that were placed in large plastic bins that hung from underneath the drone.

Once the drone reached its prospective address, it would drop the entire bin in the yard of the customer. The question was, how did the customer return the bin to Amazon, or did they have to be present during delivery so the drone could pick the bin back up and return it to the fulfillment center?

Amazon has created some solutions for its new Prime Air program. Their drones can now carry up to five pound packages in the fuselage of the drone. The large plastic bin has been eliminated, and the drones can carry the regular Amazon cardboard boxes. Keeping the package safely stowed in the fuselage not only protects the package, but eliminates concerns that the drone may accidentally drop it.

Supposedly, the customer will first sign up for Amazon Prime Air, where they’ll be shipped a landing target. This target will be placed in a safe spot in their front or back yard. It’s presently unclear how much room needs to exist around this target, or whether a front porch, door step, or apartment balcony will suffice.

It’s possible that strata corporations and home owner associations may ban the use of drones on their property. Amazon also has to contend with city bylaws and state, provincial, and federal laws on the use of flying drones in cities and towns.

After the customer has applied for Prime Air, they can place their product orders online. The products will be placed into one of the drone prototypes specifically created for Prime Air. Amazon promises that the packages will be delivered in 30 minutes or less.

From this information we can discern one clue: One is that this program will only be available in cities that have Amazon fulfillment centers. Not only that, but the average drone can only fly for ten minutes. There are a fewer higher end models that can fly for fifteen minutes, so it’s entirely possible that Amazon has created a drone that can fly for 30 minutes out, and another 30 minutes back to base.

The Amazon drones are not your average quadcopter; they’re a cross between a helicopter and an airplane. They are able to fly out to a distance of fifteen miles, and up to an altitude of 400 feet. They’re built with sense and avoid technology, to avoid colliding with birds, trees, roofs, and other small aircraft.

The drone will take off from the Amazon building, and head to the delivery location. As it nears, it will scan the area to drop off the package.

The drone will hover above the special landing mat that had earlier been shipped out to the customer, and drop the package from its chute. These landing mats contain the Amazon logo, and possibly other GPS technology. There’s no information on how a customer will be able to sign for a package.

Many questions arise over the Amazon Prime Air program. What kinds of safety features will be built in? Amazon claims that there are many safety features and sensors. The drone should not land if the landing pad is blocked by pets, vegetation, or children.

There is also the question as to what happens in the event an order can not be delivered. Is the customer on the hook for delivery charges? What happens if a prankster moves the landing pad, and the package is collected by someone who is not the intended owner?

What if packages are shot down in countries where most citizens have the right to own one? This could create additional liabilities on the part of Amazon, who may be blamed if those shots end up hurting someone. If a drone becomes damaged during delivery, who pays for the repairs?

There are many hurdles that are holding back the Amazon Prime Air program. These come mainly from air space regulatory issues. As air safety becomes paramount in today’s political climate, as well as individual’s privacy laws, many are left wondering how Amazon can get past these hurdles. Can Amazon follow the rules, and yet integrate flying drones into their package delivery service?

It’s obvious that Amazon will never be able to deliver packages to every corner of the world. They will also be limited by size. Larger parcels will still need to be delivered by mail or by courier.

A lot of the onus for making the Amazon Air program successful will be placed in the hands of the customer. If a customer is not available, they will have to simply receive their parcels by the old method of delivery: the postal services.

Amazon is still testing over a dozen different drone delivery designs. It’s apparent that Amazon possesses the technology needed to get these packages in customer’s hands, but will flying delivery drones ever become as commonplace as seeing a postal services mail truck on the road?