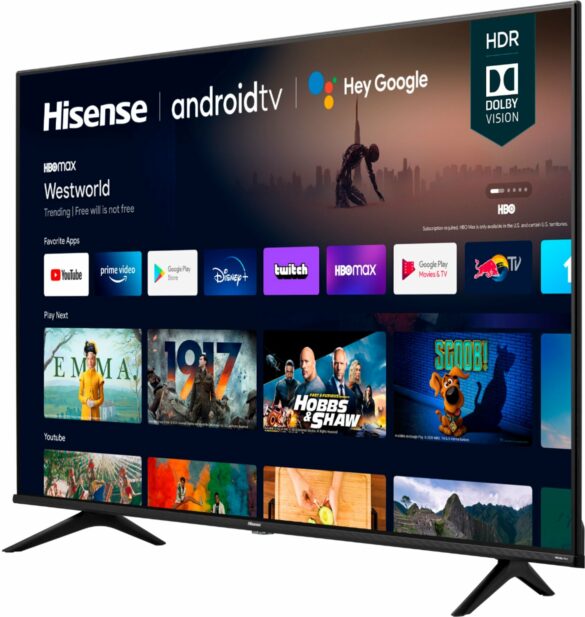 It’s the weekend, and you’re curled up on the couch with some popcorn and a few goodies. The ambiance is perfect to binge-watch that brand-new Netflix show. Unfortunately, your Hisense TV won’t power on. Frustrating right?

Your Hisense TV may occasionally fail to switch on, but this does not necessarily indicate that it is broken. By using troubleshooting techniques or calling a qualified specialist, you may frequently solve the problem in a short amount of time. Thankfully, this post presents a few fixes.

Why won’t my Hisense Roku TV turn on, but the red light is on?

There could be several causes for your Hisense TV not to turn on. The power outlet, wires, remote, or other devices could all be at fault. The power cord or AC outlet will likely be the problem if the Hisense TV is brand new. For starters, knowing its state will help identify the exact problem—there are three typical situations in this case: when the red standby light is on, off, or flashing.

A defective or missing power cord is another frequent problem; if this is the case with your Hisense TV, examine the connections there. Use a screwdriver to tighten them if they are loose, and if they are damaged, replace them with new ones.

An electronic device like a surge protector can malfunction and disrupt the power supply to your Hisense TV. In this situation, connect the TV straight to the main power supply.

A typical user error that can prevent your Hisense TV from turning on is choosing the incorrect source. Check if the TV is in sleep mode and adjust accordingly. If not, move to the next.

The most frequent reason is a faulty power supply, typically brought on by an electric shock that damages the motherboard. For instance, abrupt energy overloads from dramatic lights might overwhelm Hisense TVs directly plugged into AC outlets with too much electricity. Therefore, get a surge protector to avoid accidentally frying the circuit board of your Hisense TV.

Ensure that your TV is connected to a sufficient voltage outlet. If it isn’t, your issue can also be brought on by this. This problem can be resolved using a voltage stabilizer, or you can try unplugging any adjacent significant devices.

Even with the power on, a poor signal can result in a blank screen on your Hisense TV. A lousy signal could result from adverse weather conditions or interference from nearby media and electronic devices.

What to do when your TV turns on, but the screen is black, Hisense?

Hisense TV is one of the most popular smart TVs on the market, and it’s widely praised for its easy-to-use interface. One downside is that it can be hard to find out if you have a problem with your Hisense TV. To help you figure out if you need to reset your Hisense TV, we’ll run through some common issues and what could cause them.

Scenario 1: Red light is on

Sometimes the red light will be on, but your Hisense TV won’t turn on. In this situation, unplug the TV from the power supply and hold the power button for approximately 15 seconds. Turning on and off the Hisense TV while re-plugging it is called TV power cycling.

Resetting resolves several problems and restores default configurations to corrupted settings. A complete diagnosis is needed to examine the motherboard if this doesn’t resolve the issue. An expert will offer appropriate advice if the problem is, for example, one with out-of-date software or fried hardware due to voltage fluctuation.

A broken power supply or worn-out surge protectors may be to blame if your Hisense TV won’t switch on and the standby indicator is flickering. The TV can be turned on without the remote in the first instance by unplugging it, waiting 30 seconds, and then plugging it back in.

If this doesn’t work, check your surge protectors and replace them. Flashing red lights are typically caused by voltage problems or internal TV component failure, such as a short circuit in the contact circuit.

Scenario 3: The red light is off

If the red light on your Hisense TV is off but on, there is no power to the TV—consider a different power supply or AC outlet. Alternatively, you might need to give the power cord a solid shove. Turn on the Hisense TV after unplugging it and plugging it back in to dissipate any remaining power.

If the screen is black, try pressing any key on the remote; if something shows up, the power source is good. Examine the signal strength because it could be impacted by bad weather like lightning and thunderstorms.

If none of these solutions is successful, the final option is to get in touch with the Hisense customer service team.

How do I fix my Hisense TV when it doesn’t turn on? Troubleshooting a Hisense TV.

Fixing your Hisense TV is simple with these methods:

First, check the power cord by plugging it into another outlet and seeing if the TV turns on. If not, then unplug it and see if the issue is fixed. If so, you should check to ensure that there aren’t any loose wires in the back of your TV. If none of those issues exists, you may have a problem with your power button. You can fix this yourself by removing the back cover of your television and checking for any visible damage or wear on its surface—if so, replace it with a new one and try turning it on again.

Attempt briefly unplugging your Hisense TV for 30 seconds before plugging it back in. Any interference from adjacent cell phones or other electronic or electrical devices, such as dryers or washers, should be resolved. Inspect any other gadgets that may interfere with the reception plugged into sockets close to your Hisense TV. To find out which one is producing interference, unplug each momentarily. This will help you decide whether any other gadgets require replacement.

The overall performance of your Hisense TV is impacted by outdated firmware. An example might be a TV that won’t turn on despite the red lights being on or flashing. Periodic firmware updates will add features, improve quality, and increase resolution, enabling your Hisense TV to operate at its best in terms of compatibility and performance.

Finally, if none of those suggestions works, resetting your Hisense TV may be your only option. To do this, hold the “Menu” button on your remote for 20 seconds until all indicators light up red—indicating that your screen is ready for viewing! You can also use this process without a remote—using the power button on the TV.

Resetting will revert your TV settings to the default configuration and eliminate all corrupted files. This is the ultimate answer to your Hisense TV problems.

Related: Samsung TV Not Connecting to Wi-Fi – Reasons And Solutions

Does Hisense TV have a reset button?

Yes, there is a reset button on the back of your TV. To access this, you will need to open the back panel of your TV. Once you have done that, you will see a small hole next to the power cord connector. Insert a paper clip into this hole and hold it in place while you turn on the power to the television (you may need to press the power button on your remote). This should cause your TV’s display to flash multiple times before returning to normal mode.

Why does my Hisense TV turn on and then off immediately?

If your Hisense TV turns on then immediately shuts off, this may be caused by something as simple as dust or dirt in your display. An issue could also cause by your power supply or other components inside the unit itself. If this happens often, try cleaning it thoroughly before turning it back on again. If that doesn’t work, consider replacing your power supply with one that is more powerful than what came with your unit originally (or go ahead and purchase a new one altogether).

My Hisense TV won’t turn on after the update.

If your Hisense TV doesn’t turn on after updating, your software may have a problem. It’s possible that the update overwrote a system file and corrupted the operating system. Unplug all power cables from your TV and any other connected electronic devices to fix this issue. Then, hold down on the power button for 15 seconds until it starts to flash red and white. Lastly, release the button when it starts flashing red and white again.

How Long Do Gaming Laptops Last?