Eero vs Google WiFi – Which One To Buy? 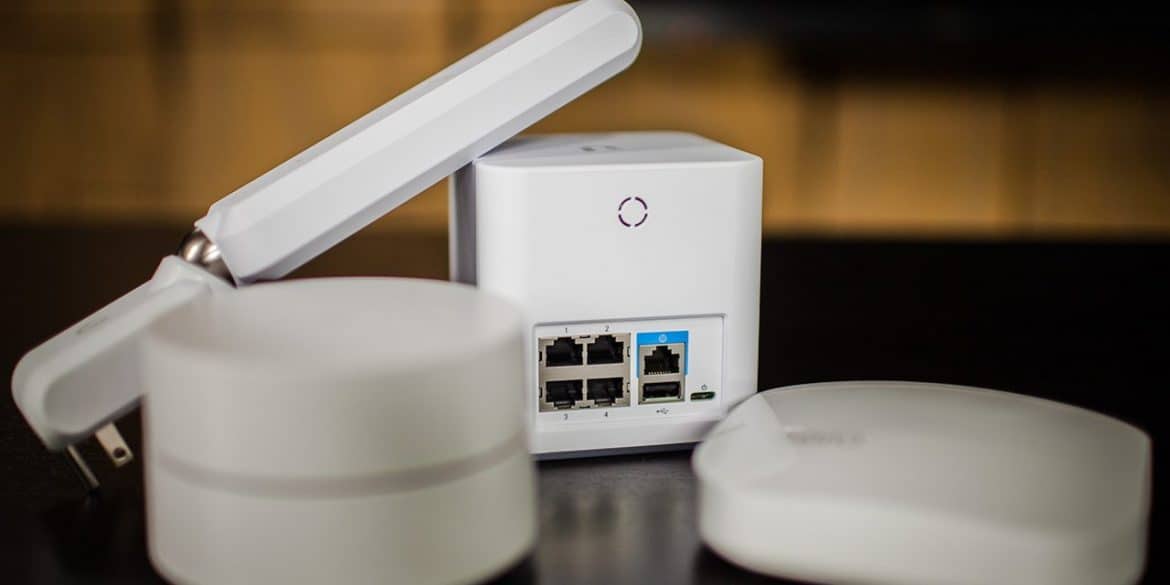 Back in the days, it was one computer connecting to the internet using a modem at a time. That changed with WiFi, where you could now connect multiple devices. But you have to make sure that the devices are at close range with the WiFi router; otherwise, the connection will become slow and disrupted. That is where mesh networks come in handy. Instead of one router, you have many WiFi mesh routers so that the devices will connect to the closest mesh router.

But the question is, which criteria do you use when you want to choose the best WiFi mesh network for your home? Do you look at the compatible mobile app, parental controls, ease of installation, or the tri-band connection?

Eero and Google WiFi comes out as the best competitors in the WiFi mesh network world. In this comparison article, we will do a side by side comparison of the two to see which one performs better than the other.

One common thing about the two WiFi mesh networks is that even though they come at different prices, they are both affordable for most people.

When it comes to installation, Eero and Google WiFi offer you an installation process that will take you only a few minutes to perform.

It is also true that the two have two Gigabit Ethernet ports. Both networks are supported by nodes that you place in specific locations in your home.

Although some people may want a complete replacement of their router, others have no problem just extending the range of the WiFi networks. In that aspect, both Eero and Google WiFi come in handy as each supports bridge mode, although they may differ in how well they support that function. For instance, Google WiFi will work with the bridge mode only if you have a single Google WiFi point.

The two routers also come with built-in LED lights that show the status of the device, and they also guide you during the installation process.

Both routers support smart home technology. Using the Ethernet ports on the Eero and Google WiFi routers, you can connect a smart hub like SmartThings and enjoy controlling all your smart devices in your home from one point.

Lastly, the two WiFi routers help to reduce WiFi dead zones in your house. They use multiple points to form a mesh all around your home, leading to a secure WiFi connection in every corner of your house.

Let us now look at each product in-depth.

The Duel - For The Best Mesh Router

You can get the Eero mesh network router at $249.00, and it includes 1 Eero, which is the primary system and 1 Eero beacon, which extends the network and gives around 2000 square feet of coverage.

Eero also offers you another bundle that goes for $549 and includes:

Eero comes with one main unit and two beacon units. The beacon should not be placed on a flat surface, but it should be inserted into an electrical outlet.

If you are a DIY kind of person, Eero router is for you. It has an easy installation process that involves downloading the Eero app on your Android or iOS device and then follow the simple instructions involved in setting up the router.

One area of concern when it comes to internet usage is security. Nobody wants their data to be at risk while using the internet. While using the Eero router, you can subscribe to the Eero secure and Eero secure+ subscription services and receive services such as content warning, ad blocking, threat scans, and so on, which make you secure. Plus, there will be automatic software updates that enhance safety and security.

You can also download and install the Eero app on your Android or iOS phone. With the app at hand, you can do so much, including checking device usage, checking what is going on with your network, share your network, and also pausing the internet when you want to.

The WiFi mesh network router also works with Alexa voice assistant that allows you to use your voice to control the WiFi, including managing the WiFi access to devices and individuals in your house.

With the Eero WiFi router, you can now surf, stream, download, play games, and so on with the fast and reliable WiFi connection in your home as the WiFi mesh network gets rid of all the dead spots in your house. Plus, the fact that it covers around 5000 square feet ensures that you have a stable internet connection in your whole house

Eero also supports beamforming, which is a useful technology that allows you to direct the internet signal from your router to the connected devices in your house instead of the signal being broadcasted everywhere in the house.

Additionally, the device comes with 1 GB flash memory and 512 MB of RAM. 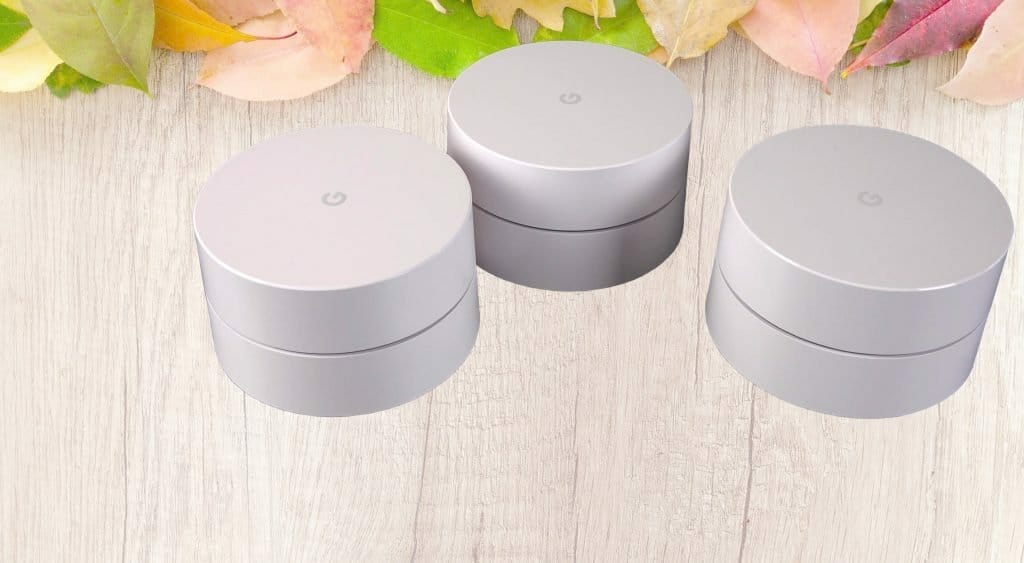 You can get all the WiFi dead zones and buffer in your home by getting the Google WiFi mesh network router that costs $242.90 for a three-pack or $129 for a single pack.

Google WiFi also has a minimalist design, which enhances its portability, and it also takes minimal space in your room.

It also has a sleek and elegant small and cylindrical shape with a smooth white finish. Additionally, the router comes with LED lights with attractive color coordination and are easy to understand.

Google WiFi router has an easy DIY installation process. All you have to do is download the Google WiFi app that is available for both Android and iOS devices and install it on your phone and then follow the instructions.

Google WiFi mesh network is compatible with Google Home. As such, you can connect your smart home hub to the WiFi router and enjoy controlling all the smart devices in your home using your voice via the Google Home voice assistant.

It also comes with a Google WiFi app that comes in handy when it comes to the installation process. Additionally, the app allows you to share your WiFi password with friends, see what is connected, and also prioritize the devices on your network. For safety purposes, the app also comes with family controls that enable you to pause the WiFi on your kids' devices like when it is bedtime or dinnertime.

The WiFi has advanced software that manages it in the background relieving you of the responsibility of doing so yourself. Plus, it has a Network Assist technology that selects the clearest and fastest channels for you.

If you buy a single Google WiFi, you can be sure to get 1,500 square feet of the connection while a set of three covers up to 4,500 square feet so that you can have total coverage from the basement to the backyard and reduce all the WiFi dead zones in your house.

Also, the WiFi supports the beamforming technology that enables you to focus the internet signal in your home towards the connected devices instead of broadcasting it everywhere, thus increasing the internet speed and strength.

Netgear Orbi Or Google WiFi ? Battle Of The Titans

While it is possible to enjoy both of the devices with no extra cost, Eero offers more functions through the optional Eero plus service. On the other hand, Google WiFi does not have a subscription service.

Though the two routers have a minimalist design, Google WiFi extends vertically, and it is almost twice the height of the Eero.

Between the two WiFi routers, Eero WiFi is the more advanced, though not as much. The Eero WiFi router performs better in that it offers a tri-band WiFi connection against dual-band provided by Google WiFi. Also, Eero has slightly better coverage at 5,000 square feet against 4,500 by Google WiFi. Eero also offers more security and safety, and with the necessary subscriptions, you get to enjoy more functions.

Note that Google WiFi also performs well in so many aspects. It is also the most affordable option between the two as it is cheap and does not have any subscriptions for you to enjoy the features.

Our choice is the Eero WiFi because it runs better in the tri-band WiFi than the Google WiFi that runs on a dual-band setup. The Eero commands strong connectivity through the room. Additionally, the Eero three-pack will cover at least 5000ft against 4500ft by Google WiFi. This extends well and delivers stable connectivity in your area.

Eero is compatible with the Amazon Alexa voice command as well. Don’t have a subscription? Worry not as it can work without one but for efficiency, you can get the optional Eero plus service and take advantage of more functions that lack in the Google WIFI unit.

Finally, it has more security features to protect your device from attacks and promote security as you enjoy more functions.