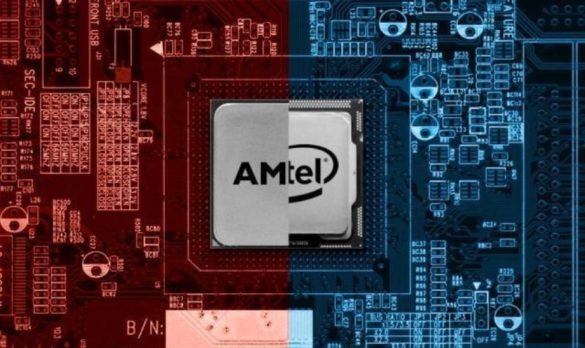 Pro gamers will freely tell you that a high-performing processor beats skill anytime. You may have the best techniques, but your efforts will not take you to the top with a lagging laptop. So, if you’re aiming to interact with pros and be one, invest in a processor which can perform intensive multi-thread activities.

Here’s an overview of features to consider when looking for a gaming CPU:

Is Gaming Better On Intel or AMD?

Intel and AMD are two of the most popular chips used in gaming computers. Both companies produce processors and graphic cards designed to handle intensive applications like gaming, but which one is better?

The answer depends on what kind of gamer you are and what you want to do with your computer. If you’re looking for a powerful processor that can handle graphically intense games, Intel’s i7 processors are known for their high performance, making Intel the right choice. But if you want something more budget-friendly, then AMD’s Ryzen 7 2700x might be a better option.

Intel has been around longer than AMD, so they offer more options when it comes to processors. They also have an advantage in graphics cards because they produce dedicated chips explicitly designed for gaming purposes rather than having integrated graphics processors built into their CPUs, as AMD does.

The best processor for gaming trickles down to what you’re looking for and the budget at hand. Intel also makes chips to run data centers, while AMD has a lot of graphics cards that are great for gaming. AMD’s Ryzen chips are known for their low cost and price point compared to Intel’s offerings.

AMD Ryzen is known for its low power consumption and high performance, which is excellent for using gaming laptops or desktops with limited power supplies.

Their processors are also more affordable than Intel’s offerings—you can buy a Ryzen 5 2600 for about $200, compared to the Intel Core i5-8400’s $240 price tag. However, AMD’s processors tend to be less potent than their Intel counterparts: For instance, the Ryzen 5 5600 is only intended for gamers who want to play games at 1080p resolution or lower.

Intel is a bit more expensive than Ryzen offerings but offers more bang for your buck regarding processing power. The Core i5-8400 has 6 cores and 12 threads, which means it can handle multiple processes simultaneously without slowing down as much as an entry-level AMD Ryzen processor would.

It also has an integrated graphics card built into the processor, so you won’t need an expensive separate graphics card to play games smoothly—which can save you money over time!

Is Intel or AMD better for graphics?

For example, Intel’s Core i7 series has some of the best performance available in laptops today. They’re powerful enough to run many demanding programs without overheating or freezing up on you. They also offer plenty of RAM options, so you can pick one that fits your needs perfectly—or make sure you get enough RAM at once so you never run into slowdowns when loading up multiple programs again!

On top of all this fantastic stuff, these chips also have built-in security features like 256-bit encryption and hardware acceleration for better performance when running virtual reality games.

AMD vs. Intel pros and cons

AMD and Intel are two of the biggest names in tech, but they’re also the most confusing. Each has its advantages and disadvantages, and if you’re looking to buy a new PC, it can be hard to choose which brand is right for you. Let’s check the pros and cons of each.

Intel has more cores than AMD, which means it can handle more tasks simultaneously. This will help improve performance in most applications. Still, it won’t necessarily be noticeable when running games or other tasks dependent on having lots of cores available at once (like video editing).

Intel typically has higher clock speeds than AMD, which is essential if you want to get the most out of your hardware and software when gaming or other intense tasks. However, there are times when an AMD processor can perform better than an Intel one—for example, in some games, hit detection matters more than data processing speed (such as first-person shooters).

Both AMD and Intel processors have overclocking capabilities. However, all AMD Ryzen CPUs are unlocked–their processors can be overclocked up to 5GHz allowing users to get more performance out of each processor than if they were running at stock speeds.

On the contrary, only a few Intel CPUs are unlocked and can be safely overclocked.

Intel offers better performance than AMD for most tasks because their CPUs have more cores and instructions per clock cycle than their competitors. However, if you’re looking for a balance between performance and price, then AMD is perfect. Intel graphics are generally more powerful, but AMD graphics are more efficient.

Lower power consumption means that your gaming rig will be quieter than other computers, making it more enjoyable to use throughout your day without turning up your speakers or TV set volume levels. Intel consumes less power compared to AMD processors.

Both companies have different heat sinks that help keep heat from being transferred from one component to another through metal pathways inside the computer case. The heat sink helps dissipate heat from your computer’s components so that they don’t become damaged or overheat during use at high-performance levels. This is especially important for laptops as they tend to get hot during long processing times with multiple programs open at once or when playing demanding titles.

AMD is usually cheaper than Intel regarding the price of its processors, making them a good option for gamers on a tight budget.

Which is better Ryzen 5 or intel i5?

If you want to build a gaming computer, then Ryzen 5 and intel i5 are the best processors for gaming. AMD Ryzen 5 2600 is an excellent processor with quad-core and eight threads, which means it can run multiple tasks simultaneously. It also has four cores and eight threads that Windows can use. It is known to be one of the fastest processors in the market.

The i5 processors offer much more performance than their AMD side of the spectrum, so if you want to get the most out of your gaming rig, look no further than an Intel i5 processor.

If you want to game and go for budget, AMD is better for gaming. The difference isn’t huge, but AMD can consistently overclock their processors much better than Intel. On the other hand, if you’re doing professional work with your PC, I’d recommend using an Intel Core i3/i5/i7 than the Ryzen 5/7 series. It’s all because of the higher core count and larger cache size Intel provides over Ryzen series CPUs.

How Hot is too Hot for GPU?