Quadcopters, a.k.a. drones – is a relatively young area of development. Yet just in a few years of existence, they have managed to become quite a popular trend. These flying devices, that resemble UFOs, have become quite revered by many dreamers around the world.

Unmanned helicopter – is a completely new generation of devices that are being used for professional aerial photography. They are easy to operate and demonstrate excellent flight performance even in bad weather conditions. It is these representatives of flying devices that opened the door to a fascinating world of modeling.

The mechanism of these aircrafts consists of four rotors that rotate in opposite directions. Unmanned helicopters can fly automatically, because they are able to follow a route using GPS navigator and land in a specified location on their own.

Movement and maneuvering of a quadcopter is enabled by changing the speed of helical screws. This device is much faster than a radio controlled helicopter – its construction is easier to operate, it is stable in the air even in bad weather and is less prone to mechanical damage. When hit hard, the motor will stay intact, and the damaged helical screws and other body parts are easy to replace.

Of all the design features of these devices, it should be noted that the quadcopters have a hard and dependable construction of the frame, large power reserve and a stable power supply. These design features make the unmanned helicopter an excellent choice for various commercial applications.

For example, take a look at the quadcopter model Syma X1 4 Channel 2.4G. It is very easy to operate and is forgiving to small gusts of wind as compared to a helicopter of similar size, so even novice pilots can quickly master operating it. 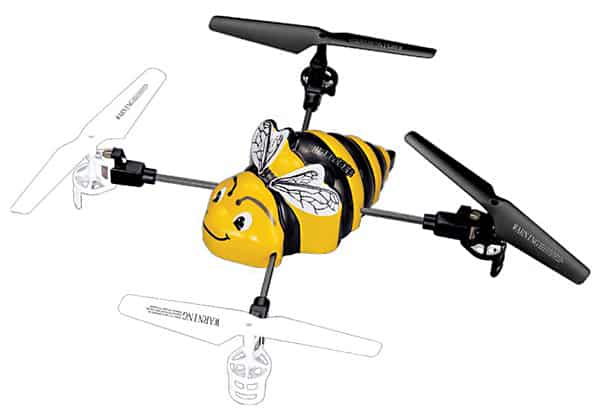 What is unmanned helicopter capable of?

Unmanned helicopter with a camera is a unique creative tool that in the last couple of years greatly expanded the capabilities of the movie industry. Since the price of shooting with a quadcopter and overhead costs are significantly lower than shooting a video using a helicopter, it is used by both amateur and professional movie studios. Only a big movie company can afford renting a helicopter, while a flying drone can easily be afforded by anyone.

These flying devices have caused a real revolution in the field of modeling. They belong to the professional category and are able to demonstrate excellent stability and duration of the flight. Some modern models can be operated even using tablets, smartphones and other devices.

Here is a short list of only a few things that unmanned helicopters are capable of:

So, how would you like to experience a ton of positive emotions? Buy a flying drone and fill your life with unforgettable experiences!

Purchasing an unmanned helicopter is the optimal solution for those people who like to shoot breathtaking panoramas and video clips. If large helicopters are too complicated for you and you want to buy an interesting tool for your creative projects – quadcopter was simply created for you. Moreover, this class of radio-controlled devices can be also recommended even for beginners in piloting.

Can Google ChromeBook Be A Next Work At Home Laptop?