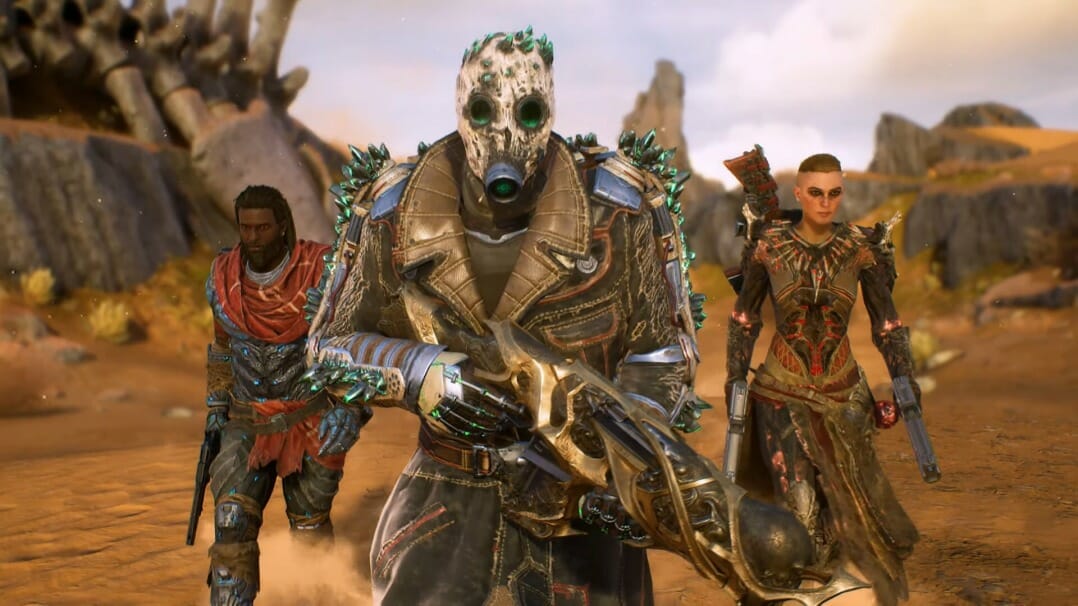 Outriders to Launch on Xbox Game Pass from Day One.

It wasn't long ago that the Xbox Game Pass Twitter account appeared to be signalling something strange.

Of course, it's easy to misconstrue or wrongly interpret tweets at times. But still, the use of words like "anomaly" and a "mysterious signal" had many of us perplexed.

Not least so, Forbes, who previously reported on the odd phenomenon, suggesting that this could well be a passing reference to Outriders. An upcoming looter shooter game from Square Enix.

In many ways, the tweet was so belated. But cryptic in its tone, the jury was still out on whether this was discretely teasing Outriders' launch. Or oppositely, the likeness was perhaps purely coincidental. The latter, surely the most unlike option of the two?

Of course, now we can throw all that speculation aside. As of today, we have official confirmation.

And Xbox fans will be pleased to hear that, as of April 1, Outriders will indeed be available on the Xbox Game Pass.

In short, that's no small feat. Especially so when you weigh it up with past partnerships. In effect, it's a deal not too dissimilar in significance to when Xbox secured Destiny's 2's major expansion Beyond Light.

The difference here being that Outriders is a fully-fledged title and not DLC. Outriders on Xbox Game Pass | Too Good to Be True?

As with a lot of the finer things in life, inevitably, the pros tend to outweigh the cons. Even so, you're always going to see a negative element slip through the cracks now and then.

This one is no different. Outriders will land on the Xbox Game Pass from day one across a wide range of devices. Though this time, PC players will miss out, unfortunately.

That's right. If you find yourself playing on either console, phone with xCloud compatibility or tablet, then you're in luck.

But if you intend to play on PC, then you'll have to purchase Outriders via either the Epic or Steam store. Not entirely sure why that is. Perhaps, they couldn't secure a deal fit for all parties.

Whatever the case, I wonder what transpired here. On the surface, it seems strange that within a matter of weeks remaining before launch, they'd drop this somewhat bombshell announcement, seemingly out of the blue.

It begs the question. What happens to pre-existing orders of Outriders placed on the Xbox storefront? What's more, will those with an Xbox Game Pass have theirs automatically cancelled? Well, we now know that you'll have to initiate a cancellation of your pre-order manually.

So, here’s a little heads up to do so. Should you find yourself in that position. Does Progress Carry Across from the Demo

That's a good point. And an important one, as it so happens. My understanding is that any progress made in-game carries over but will not include cross-platform functionality.

In other words, we could well be faced with scenarios whereby players have slogged it out on PC, earnt many in-game rewards, but couldn't continue their character's progression if they then decided to leap over to Microsoft's "free" offering of Outsiders.

So, in short, you may have to grind twice over if you want to change platforms.

Thaaaaat's a bit of a bummer in my eyes. I'm not going to lie.

Given that this may cause a few grievances going forward, it will be interesting to hear from player’s post-release. Either way, I am curious to see how well the game launches on April 1.

Hopefully, it's smooth sailing all the way. Microsoft has been on a notable roll in recent weeks. Slowly but steadily bulking out its acquisitions. After all, it wasn't long ago that the studio entered into a partnership with Zenimax media.

Which, in turn, gave Microsoft the rights to offer subscription payers 20 of Bethesda's best games via the Xbox Game Pass.

Fast forward time to now and the company has secured Outriders. One can only surmise that this is a lucrative deal for the upcoming looter, which will likely ensure they take home a decent pay package from Microsoft for the loyalty shown to Xbox Game Pass.

On the other hand, it also reveals Microsoft's ever-expanding influence on the industry. With much of the market now in their hands, Microsoft may not need to rely purely on past Bethesda titles but can instead look to tomorrow's upcoming games for future success.

If Xbox Game Pass is to sustain itself over the console's lifespan, deals like these will surely help extend its appeal. On that note, reaching out to new top talent and offering a few surprises along the way will help wonders. Will Outriders Be Worth Playing?

When it comes to the crunch, putting aside all potential problems with in-game progress comes release; for me, Outriders' success depends on a handful of factors, regardless of platform.

Firstly, can the game stand out from a sea of looters? It's no secret that the genre finds itself oversaturated with endless examples. And so, how does it differ? What makes Outriders unique from the rest?

If you're still not sure, perhaps the words of Megan Spurr, Community Lead, Xbox Game Pass can entice you on board.

"You are an Outrider, re-awoken from cryostasis 30 years after the first landing on Enoch – emerging as an Altered – a being with access to powerful skills and healing abilities. And now you get to flex those skills on the ever-raging battlefield! Create and customize your own Outrider, then use their devastating array of abilities to annihilate your enemy as you embark on the journey to discover the source of a mysterious signal on a dangerous and untamed world."

I, for one, am excited to put this title through its paces come launch.

That concludes today's topic. What are your thoughts on Outriders? Will it be a smash-hit for the Xbox Game Pass? Be sure to sound-off in the comments.

I love to read through all your submissions.