VGA Light on Motherboard – What Does It Mean? 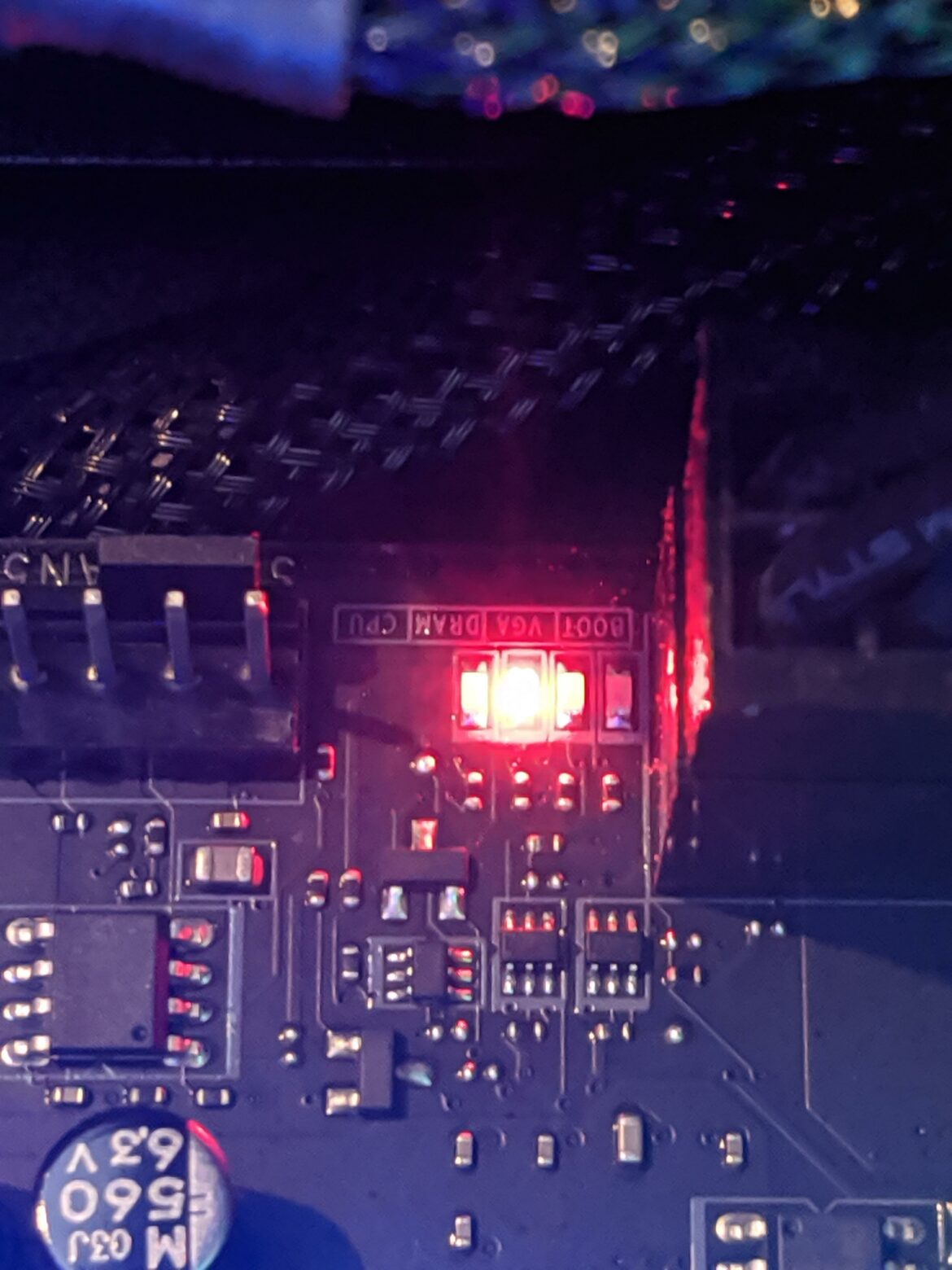 The motherboard is the heart of a computer. It is where all collaborating components of the device are connected and controlled. This circuit board has CPU sockets, expansion cards, panel ports, and disk drives bridged with cables and wires.

These LED lights are labeled: CPU, DRAM, RAM, and VGA. Our focus in this article shall be the VGA lights. The motherboard’s VGA (Video Graphics Array) lights indicate malfunctioning components. If the GPU (Graphics Processing Unit) is not functioning well, the light will glow and remain on until the issue is resolved.

Why Use ASUS Motherboards?

The VGA lights on the motherboard indicate the state of the graphics card. The Graphics card connected to the motherboard contains the Graphics Processing Unit (GPU), which translates pixel information from the CPU or software application into images that can be displayed on the monitor. When booting your computer system, the LED light labeled VGA will flash in a particular manner to show whether there are issues that need to be fixed in the GPU.

Imagine booting up your computer, and everything seems fine and functional, but the VGA LED light is still on. Don’t fret over the glow. It could mean that the GPU system needs to be seated correctly. The system is running well, but your ASUS motherboard is communicating that a slight issue needs to be corrected. Moreover, the problem could be caused by improper BIOS settings.

You can solve this by removing the GPU from the PCI-E slot and re-inserting it correctly. You can also check your BIOS version and assess whether it needs to be updated.

Related: What to Look For in a Gaming Motherboard? (Simple Answer)

You are possibly worried about the white light on your MSI motherboard. It is an indicator of something wrong with your device. The white light points to an issue with the display functions of your computer, meaning there is a hitch in the GPU system. Some of the possible problems include the following:

The motherboard gets an analog signal that needs to be converted into a digital signal with better quality and connection. Poor or double conversion creates undesirable image qualities, and the LED white light communicates the need to fix the issue.

2. Glitches in the GPU

A faulty graphics card in your device could produce an undesirable graphic display in the form of a frozen image on the screen. The white light could appear on the motherboard to indicate the need to repair or replace your graphics card.

The white light could also indicate that the display port is incompatible with your device. The motherboard of your device detects a worn-out display port which needs to be replaced with a better cable.

Related: How to Find Out What Motherboard I Have? (Simple Answer!)

How to Fix White VGA Light on Motherboard

Now that there is a white LED light on your motherboard indicating that your system has an issue, what should you do to resolve it? The following are steps you could take to fix your device.

Various components of a computer malfunction when the power supply is inadequate. Assess whether there is a disconnection at the sockets or the power port.

The various components of the system are likely experiencing a hitch. By reassembling the system, the computer’s functions may resume normally.

The white light could also indicate that the graphics card is placed wrongly or in a manner that interferes with the functioning of the GPU. Fixing it in a more appropriate way or position could resolve the underlying issue.

4. Inspect the Damages on the Graphics Card

The white light could indicate a worn-out or faulty graphics card. Check whether its components are in order or visit an expert who can carefully assess them. If that is the case, repair the card or replace it altogether.

Some of the problems indicated by the white LED light could result from software malfunctions brought about by downloading old versions of BIOS. Update your BIOS version while confirming whether it is compatible with the official provider and your device.

However, if any of these steps fail to resolve the white LED light warning, visit a computer expert to conduct a rigorous inspection for problems that cannot be resolved quickly.

The computer is booted, but the monitor screen is black! On the Gigabyte motherboard, the VGA light is glowing red. Don’t worry. You can fix this. The VGA light only shows a slight problem with the GPU.

The following are possible causes of the VGA light glowing:

How to Fix the VGA Light on the Gigabyte Motherboard

The VGA light on the Gigabyte motherboard requires you to assess the different components of your CPU and GPU to sort out the malfunction. The following are steps you can take:

You wonder why the VGA LED light flashes white when booting your device. The white light on the motherboard ASUS indicates a problem with your VGA or CPU.

The following are possible issues you should check out for:

The white light could mean a problem with the GPU system interfering with the display of the video signal. Try checking whether it is compatible with your device’s motherboard or if it is fitted correctly.

A White LED light could also indicate that your device downloaded the wrong BIOS version. Furthermore, the wrong installation of the updates could lead to system failure and severe damage to the motherboard. If the white light blinks, there could be a severe problem with the CPU or VGA that requires immediate repair.

Boot and VGA Light on the Motherboard

When you boot your computer device, the system runs a diagnostic test to determine whether there are problems with the connecting components and associated hardware. A VGA light glowing on the motherboard shows that a malfunction has been detected and needs to be addressed immediately.

The VGA light will remain on until the issue is sorted out. A red LED light could communicate that the GPU system is fumbled. It could mean insufficient power reaching the system or scrambling the system itself. The monitor cannot display a video or graphic signal when this happens.

A white LED light could indicate that the graphics card is seated wrongly in the PCI-E slot. Although the display function could still be running well, the light glowing means a correction must be made. Remove the graphics card and check if it has any issues. Satisfied it is good, fix it on the slot carefully until the VGA white light goes off.

Why Is My VGA LED Light On?

The VGA lights indicate that there is a problem with the display function of your device. Try checking the GPU system in the graphics card or the display ports to find out what the problem could be.

What Does VGA Light Mean on the Asus Motherboard?

The VGA light on the ASUS motherboard indicates a hardware issue, especially on the graphics card. It could mean that your card is either faulty or fixed. It also communicates that a system update poses the risk of damage to your motherboard.

Why Is My Motherboard Not Detecting My GPU?

It could be that the GPU is fitted wrongly on the slot or the graphics card is faulty. Furthermore, the BIOS settings may have been compromised. There could be a power supply problem that prevents the GPU from functioning.

Is VGA Still on Motherboards?

Yes. Some motherboards still have VGA ports on the graphics subsystem of the CPU. Although modern devices use more advanced systems like HDMI, some have legacy graphics cards that are only compatible with VGA.

The VGA lights on the motherboard require a computer user to address various problems the device detects. The display problems are commonly caused by inadequate power, issues in the GPU system, and inappropriate BIOS settings. Resolving many of these issues is not difficult and can be done in no time.

How to Turn Off Ring Camera in a Few Easy Steps