Without doubt, Super Mario Bros. is the game that started it all. Thus, kickstarting fan's long-term love affair with the world's most beloved plumber, and his exploits throughout the mushroom kingdom. However, what if I said a battle royale in its honour is on the way?

Recently, we spoke of Super Mario's upcoming anniversary. Alongside that, Nintendo is re-releasing three classic games in high definition. Those of which include Super Mario Sunshine, Super Mario Galaxy, and of course, Super Mario 64.

But it gets better. As of October 1, 2020, Nintendo is serving up its unique take on the ever-popular battle royale format. Coming out exclusively for Nintendo Switch, the all-new battle royale game will follow Super Mario 3D All-Stars on September 18, as part of Nintendo's lavish line-up of commemorative titles.

To coincide with these is the launch of Super Mario 3D World + Bowsers Fury, acting as a refined version of the classic Wii U game. For all those interested, that one launches February 12, 2021.

But let us hop back to the topic at hand; The battle royale game itself. And honestly, I'm as intrigued as you guys to see how this one materialises. It is, after all, somewhat uncharted water for Nintendo to traverse. Even so, admittedly, it's nice to see Nintendo step out of its comfort zone once in a while.

The name of the game, is, as it were, Super Mario Bros. 35. The number 35 celebrating its 35th anniversary. Personally, it's incredible to think all that time has passed since Super Mario's inception. And yet, fan love for the franchise only seems to swell with each fading year.

It never ceases to amaze me. Sorry, I let the feels take over for a sec. 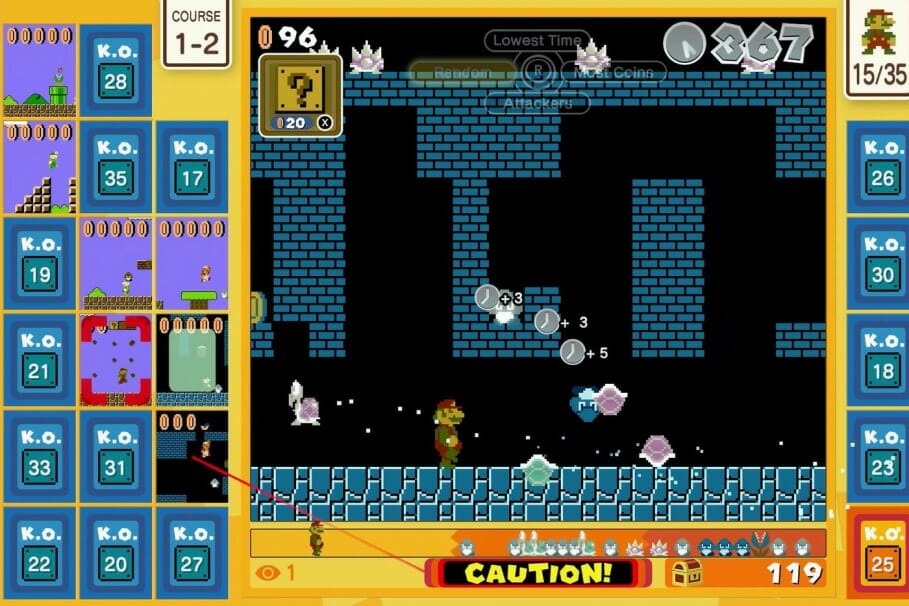 Super Mario Bros. 35 sees players compete in an online battle until only one worthy Mario emerges victorious. Similar in style to Tetris 99 in some respects, players will go head-to-head on a particular stage of the level simultaneously. Meanwhile, looking to cross the finish line with a clean bill of health. Well, more like survive at all costs. Bumps and bruises abound!

But yeah, on the surface it sounds like a ton of fun. Of course, Nintendo will inevitably throw a few obstacles into the mix. You know, as a means of making events more enjoyable. For instance, taking out enemies will grant valuable time bonuses. In turn, those fallen foes will enter the worlds of other players, in a bid to halt their progress.

Meanwhile, an in-game currency means players may cash in coin collected along the way for in-store items. Such as cosmetics and power-ups. Whether or not there will be microtransactions, is unclear at this stage. Fingers crossed they will be few and far between.

Here is What you Need to Know

Here is how it all works, according to Nintendo's official game description:

"Each player is given the same timed stage, but you must defeat enemies to earn extra time and attack your opponents. Don't forget to pick up some coins on your way—they can be used to get in-game items like power-ups. With speed, skill, and strategy, you could be the last Mario standing."

Based on the above synopsis, I have no doubt Super Mario Bros. veterans will want to test their metal via the online arena come launch. But before we become all hot under the collar, there are a few crucial pieces of information, you must know.

Predominantly, the critical catch-22 here, is that Super Mario Bros. 35 is a limited-time release. Unfortunately, that means the game is only being made available until March 31, 2021.

Why Nintendo has opted for a limited to time release on a digital-only game is beyond me, but that's the model its shipping. On the plus side, Super Mario Bros. 35 is a "free-to-download software" so long as you subscribe to the Nintendo Switch online membership.

In the online game, players will "race against time" and "defeat enemies," while foiling the opponent's plans in the battle to be the "last Mario standing!"

As a concept, I am fully on board with the game. It does sound fun in the classic sense.

My Personal View on Limited-Time Sales

As someone, wishing to see an end to outright exclusivity, regardless of console, or platform, limited-time sales present a sad reality. This though is a slightly different situation. Instead of just keeping the game on one platform, Nintendo intends to stop player's accessing it altogether past a certain point. That being March 31, 2021.

In my mind, this is a marketing stunt to boost the sales of its subscription service. And should that be their aim, I'm sure they will no doubt succeed in the endeavour. But I can't help thinking fans would prefer a long-term battle-royale game, in service to the partisan loyalty they have shown down the years.

If you think for a sec how successful Mario-themed multiplayer games have been over the decades. Mainly, via The Mario Party, Mario Kart and Smash Bros series, I can only imagine the popularity of an ongoing battle-royale, and the support it would receive.

As a gimmick, this will no doubt cater for a substantial player base. Moreover, I'm sure the timed-out event will draw in a big crowd. But I feel an opportunity has scuppered by, to celebrate Super Mario in more of a long-term sense. That would, in turn, help secure further loyalty for the future, and beyond.

Now, I am sure this will be a fun game on its own merit. What's more, I am happy to see Nintendo celebrate the anniversary with a succession of announcements. Those are my humble opinions. Nothing more.

What do you think? Has Nintendo made the right call? Do you agree with my opinions, or perhaps you take another stance? As always, your views mean the world to us.

So please send them through, via the comments section below.