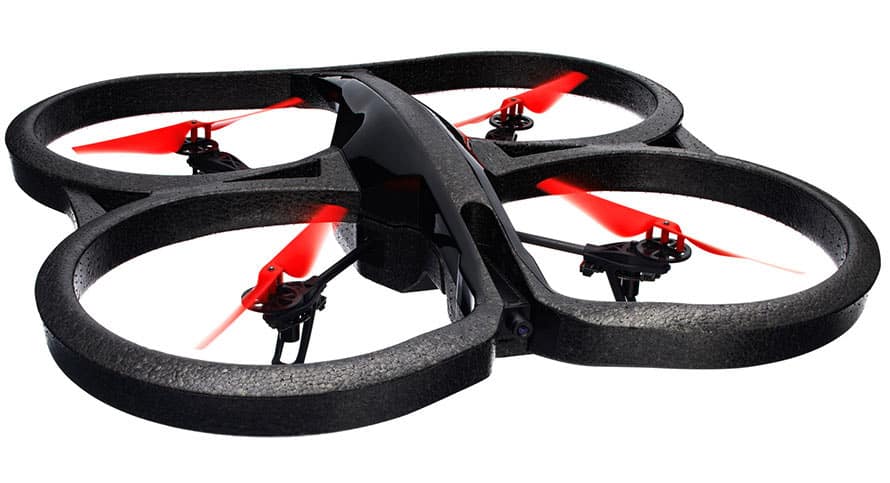 The Parrot AR.Drone 2.0 line utilizes the latest technology to keep your flying drone in the air, so your investment is protected. You won’t find these flying drones hard to crash, which is what might happen with cheaper RC flying helicopters.

The Parrot AR.Drone 2.0 Power Edition is controlled by an app on your smart phone device. It doesn’t come with a separate controller, which can be frustrating for true aficionados, but is fun nonetheless. The 720p video camera will capture sharp clear images on its video, and you’ll be able to record video with the press of a button on your smart phone device. Save it and share it with friends later, or upload to Youtube.

The Parrot AR.Drone 2.0 Power Edition also has a decent battery life of 36 running minutes, far better than the Elite Edition, and well worth the few extra dollars spent for a better model. One downside however, is that you’ll have to swap out the battery pack for a second one. You may wish to purchase more, so you have more flying time on the field though. It’ll be interesting to see how newer technology can cope with one of the major issues of UAV flying drones, and their short flying times.

When you’re getting started out in learning how to fly drones, you may find it harder to learn than you expected. You don’t want to wreck your investment before you’ve had a chance to play with it. That’s why there’s a built-in emergency control, so when your drone seems to be getting out of control, you can simply tap this button on the app, and it’ll bring your drone in for an emergency landing.

One of the nifty features on the Parrot AR.Drone 2.0 Power Edition is its ability to do a thrilling barrel roll. Watch it roll upside down, then flip back over again, all in a smooth 360 degree circle. It’ll hold position with ease, seeming to remain in stable space between itself and the ground.

The Parrot AR.Drone 2.0 Power Edition has hover capability, seeming to hold position in one spot in the air. The four blades and built-in technology will work to keep your flying drone in the air, even when you are a bit confused about how aerodynamics work to keep planes in the air.

The Parrot AR.Drone 2.0 Power Edition comes in a matte black finish, that can be spiffed up with interchangeable color blades. It’s stealthy black finish will add an extra touch of fun, as your kids play James Bond. It’s around two feet wide, and made from polypropylene, so it’s body will stand up to knocks and bumps. The edges are covered in soft foam to protect the quadcopter. The HD camera is nicely integrated into the base, being protected when landing.

You can fly your Parrot AR.Drone 2.0 Power Edition indoors with the additional foam padded protective indoor shell. The Parrot AR.Drone 2.0 Power Edition is sized at nearly two feet though, so be sure to have plenty of room to run it indoors, away from valuables. The steam lined outdoor shell has uncovered blades and is designed to run at optimum performance outside.

If you get tired of looking at your all-black flying drone, or are finding it hard to see in gloomy outdoor conditions, you can switch the blades out for more colorful ones. Included in the box are also orange, blue, and red blades, which can be mixed and matched, or color coordinated. You may wish to change the blades at home though, as the tiny screws are tricky to switch, and may get lost in grass or dirt too easily. There’s an on screen joy pad, so it’ll seem like flying a traditional flying drone, and an accelerometer so you can move it forwards and backwards.

The flying drone can be controlled by a smartphone or smart device app. You can not only safely land your Parrot AR.Drone 2.0 Power Edition
by an emergency landing, but you can also use a variety of touch controls to help you fly the model.

It not only has a few tricks up its blades, but its batteries allow for a decent amount of battery time, that can be extended with additional accessories. Its video camera has exceptional filming quality, and you’ll be proud to share your videos with friends and family on Youtube. Be sure to read all the instructions for the Parrot AR.Drone 2.0 Power Edition, from start to finish, so you can maximize your quality flying time with this fun flying drone.