Forced Air vs Central Air: What are The Differences 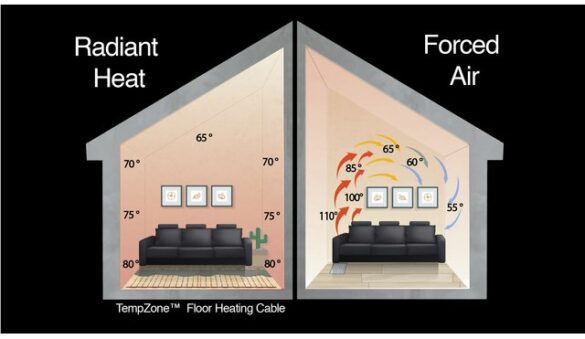 Regarding heating and cooling your home, there are two main types of systems to choose from: forced air and central air. Both have pros and cons, and your best choice will depend on your specific needs and preferences. Forced air systems use air ducts to distribute heated or cooled air throughout the home, while central air systems use a central unit to cool the entire house.

In this article, we will take a closer look at forced air and central air systems, comparing their features, benefits, and drawbacks to help you decide which is best for your home. Whether you’re looking to heat a small apartment or a large house, we’ll provide you with the information you need to make an informed decision. So, let’s dive in and explore the world of forced air and central air systems.

To control temperatures in our homes, places of work, and other public meeting spaces, a system for heating and cooling, such as a forced air system and central air system, is required.

We reviewed the two systems to provide you with all the information needed to help you make an informed choice.

Forced Air vs. Central Air: What Are the Differences?

Below is a table detailing the differences between the forced and central air systems:

What is Forced Air?

Any heating, ventilation, and air conditioning (HVAC) system that employs ducts and registers to distribute conditioned air throughout a building is called a forced air system.

To help you understand better how this system operates, we look at the different types of forced air systems commonly used in households. We explore operating systems, cons, and pros.

An Electric forced air system uses an electric heating source to warm the air. When the temperature is low, the thermostat is triggered, and the blower pulls in air to heat it and circulates it around the house.

A heat pump is the most commonly used form of the forced air system. Heat pumps work by extracting ground air from the environment, it then uses a pump to push heated air around the ducts to various rooms.

This system uses hot water to regulate the temperature. It uses a water heater and air handler to drive heated air through various vents. When the thermostat is triggered, the boiler is ignited, which initiates water flow to the heat exchanger coil. Once heated, the blower is activated and distributes the heated air to the registers in various rooms. What’s more, the hydronic coil can be used to produce hot water in the shower and laundry.

What are the Advantages and Disadvantages of a Forced Air System?

Let’s look at some advantages and drawbacks of the forced air system.

What is a Central Air System?

Most whole-house air conditioning systems are called “central air” or simply “central AC. The Central Air system takes the warm air out of your home and replaces it with air that has been cooled by passing over cold coils.

Central air conditioners can be divided into packaged and split systems. A packed system is helpful when there is limited space because it is contained in a single outside unit, whereas a split system consists of an inside and outdoor unit.

The central air uses a boiler that generates its controlled temperatures from a central point before being distributed. Forced air uses a heat pump and furnace as part of the HVAC to efficiently deliver cooled and heated air to the rooms. Central air is the air conditioning system, while forced air is the distribution system.

How Does Forced Air Cooling Work?

The forced air system can cool or heat your home’s air to maintain the desired temperature. A blower distributes air through your home’s duct system. You can find these vents in your home’s walls, ceilings, or floors. Depending on the size of your home, air circulation could occur anywhere from three to five times each hour.

What Does it Mean When a House Says Forced Air?

Forced air can only mean the house uses a heat pump or furnace with a forced air system to deliver heated and cooled air to the rooms. The house is installed with heat exchangers, coils, thermostats, air filters, ductwork, plenums, and vents to distribute and control the air that circulates.

The two are inseparable when it comes to functionality. Your air conditioning is the central air that distributes variable temperatures to room registers.

Central air also has extra features like dehumidifiers and air filters, making it the perfect choice for many. Room AC is limited to cooling. So you will need to install a humidifier separately.

To get the best out of a room air conditioner, it’s advisable to know the measurements of your room and get the best size that will cool your space evenly.

Can You Add AC to The Forced Air System

Yes, Whether it is practical to add air conditioning to your home’s central heating system depends on several factors. These include whether:

The answer to this question will depend on what works best for you. Consider the system’s advantages and disadvantages, maintenance and installation cost, noise, efficiency, and energy reservoir. While forced air and central air share many things in common, we hope this guide has clarified the way to go.

How Does a Propane Refrigerator Work? A Complete Guide