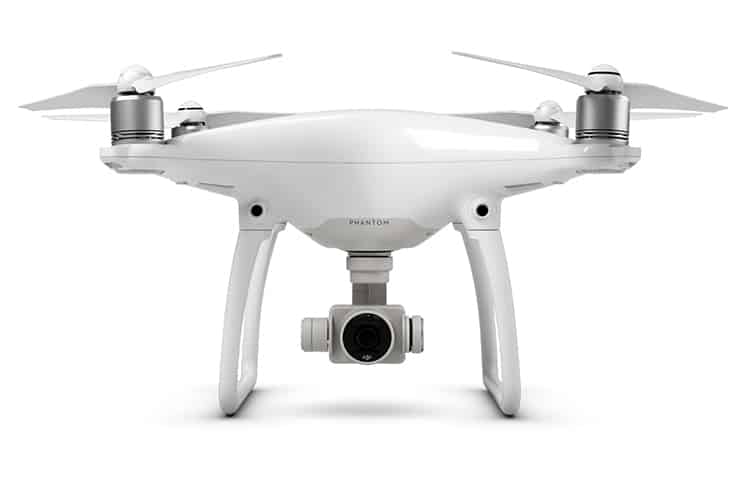 After several months of speculation, the DJI Phantom 4 has been finally released for sale by DJI. Would it be a lot like the 2 or 3, or would it be completely different? It turns out that it’s a whole new design, so don’t let its familiar shiny white casing fool you into thinking you’re good with your Phantom, Phantom 2, or Phantom 3, as you’re going to be impressed with the 4.

It turns out that some of the predictions were true, about keeping the same shiny casing, and extended battery life, while many other features were missed entirely, such as the cool new visual tracking featuring, sport mode, and easy tap to fly feature.

DJI did a great job of keeping these specifications under wraps. The public is now pleasantly surprised that they’ll need to purchase the latest and the best quadcopter, after a year of speculation that they wouldn’t need to, because the 4 would have “the same features as the 1, 2, and 3”. People who are tightening their purse strings may be a bit disappointed that they’ll have to save up for the latest 4, but it’s all in good fun anyway.

Many were worried about the sticker shock, but it turns out the Phantom 4 can be purchased for around $1400. It may not be a spur-of-the-moment gift for a child, but more of a gift for an adult who wants to record their outdoor adventures in professional-quality images and film.

The DJI Phantom 4 has the distinctive white shape that the other Phantoms are known for. It’s a quadcopter, with 2 green and 2 orange LED running light, four white blades, two C-shaped landing legs, and a premium quality camera installed on a gimbal, which hangs directly from beneath the quad.

The four blades are raised higher above the quad motors, preventing them from being damaged while in flight. This also has the additional benefit of providing more power to the quad.

The DJI Phantom 4 does not come with a radio controller unit, as they wish to promote this as “easy to fly”. However, there is an option to purchase one separately. However, one must take into consideration that you need an easy-to-fly quad with camera when you’re out backpacking, boating, or skiing, so you’ll want to leave behind the radio controller anyway, and just bring your lightweight iPad or other branded tablet instead.

An easy tap to fly feature, simple visual tracking, a sports mode for experts, and extended flying time are all new and exciting, and many quad enthusiasts will be lining up for a chance to try each of these features for themselves.

Right now you can buy the Phantom 4 directly from the DJI store, with free shipping, but soon it should be released to Amazon and other online retailers, and big box stores over the coming weeks.

The tap to fly feature makes flying simpler. There are two different kinds of quad pilots: the ones who want to learn the traditional method of piloting with a radio controller unit, and the ones who simply want to get it in the air and have fun flying. The easier the better.

The tap to fly feature works through an app that you download to your tablet. This app makes flying available to everyone, not just people who have gone to drone piloting school. The app will show you what the quad sees from the air. All you have to do is double tap to let it know where you wish to fly.

You can also highlight a specific region such as within a square with your fingers, and guide the drone in that direction. For example, let’s say you see a mountain range in the distance, you can guide your drone towards the mountain range, all while capturing some amazing video footage while you do it.

The DJI Phantom 4 has a built in “Obstacle Sensing System”. It has four different sensors on its body, which it utilizes in sensing obstacles around it. It will steer clear of these objects, or hover in place if it can’t find a way out. You can also click the “Smart Return Home” function on your tablet’s screen, and the quadcopter will return quickly to you.

DJI has made one of the simplest flight control systems that even the beginner will be able to quickly learn how to use.

Once the beginner has mastered the controls of the flight app, they may be ready to give the sport mode a try. DJI recognizes that the Phantom 4 is of interest to the beginner, the expert, and the professional. The Sports Mode is designed strictly for experts.

In fact, to make the drone more of a professional’s tool, and not a kid’s toy, is the ability to be able to switch between modes. As you learn how to pilot a drone, the drone can be adapted to your increased flight abilities.

The sport mode on the DJI Phantom 4 gives the flight control features over to the pilot. DJI has designed one of the best-in-class flight control systems. In this mode the drone pilot will be able to fly the Phantom 4 at faster speeds than thought possible. Not only that, but the speed is a 25% improvement over their other line of Phantoms.

Even though the Phantom 4 can be flown at faster speeds while in sport mode, its advanced flight control and positioning will still keep it smooth and steady in the air. These systems keep the drone safely in the air, and under control. This is also a great benefit in a drone, should the beginner accidentally switch to sport mode, they can be assured that they’re not going to crash it.

This mode is also beneficial if you wish to continue filming your video at higher speeds. You can be assured that you’ll still achieve professional quality snapshots and video, even at these faster speeds.

Another surprising feature of the DJI Phantom 4 is its ability to do visual tracking. This quad is built with AI—Artificial Intelligence—enabling the drone pilot to use cool features that aren’t available on most other types of drones.

The visual tracking feature works with the use of the onboard DJI camera. Its purpose is to film great film of a moving subject, rather than having you struggle to manually fly your drone in that direction.

ActiveTrack becomes an effortless feature, so you do not have to fly your drone along a particular path, nor do you have to use the tablet to move the camera towards a particular subject. The DJI 4 app does it all for you. Even if your subject is constantly moving, the app will control the drone and keep it moving steadily behind, as the camera films. Even if the subject moves out of frame, the drone will quickly catch up.

Many other drones accomplish these tasks by having the subject wear a beacon, or have a band attached, but the visual tracker feature needs neither of those items. This is new technology at its smartest, putting you in the director’s seat without expensive film school courses.

When you’re out in the wilderness, hiking, skiing, or having fun, you don’t want to be bound by the limits of your drone battery. Most people get started, filming great film footage and capturing some great snapshots, then they get that annoying warning on their flight app that says the drone is running low on power.

This can be the number one frustration when you’re flying. Sure, you can swap out the batteries, but that takes time.

The DJI Phantom 4 has an amazingly long battery run time of twenty-eight minutes. This is comparable to the batteries of many professional-drones that are upwards of $6000 or more, but you only had to pay $1400 for yours.

This battery can also slip easily in and out of the 4, so you can swap them out for double the flight time on the field.

The DJI Phantom 4 has a 25% battery life improvement over the battery of the Phantom 3. DJI knew they had to do better with this, particularly when you’re flying your drone over water, above hills and mountains, or through a tree canopy. And the low battery alerts and return to home functions will keep your drone from getting lost.

DJI was able to make a longer lasting battery by creating a streamlined body to handle a larger battery. More space saved means more space for a larger battery. Until the manufacturers can figure out how to get more energy into a smaller battery, this is the solution.

The DJI Phantom 4 comes with a fantastic camera that can capture professional-quality film footage. It records video up to 4K at 30 fps, and can record higher resolution footage at full HD at 1080p, and at 120 fps for slower motion.

DJI had completely reworked this camera, in addition to the entire drone. This camera has a newly designed lens that promises increased sharpness over their previously designed Phantom line.

Once your footage has been filmed, there are many video editing capabilities to make it that much better. You have access to video color profiles to help you achieve the look you need. You can choose from bright vibrant colors, to professional flat profiles. There is D-Log and Cine-D that may be familiar to some video editing professionals.

Photographs also have the option to shoot single images at twelve megapixels and in Adobe DNG RAW format.

The camera comes with a great integrated gimbal. This moves on a three axis system. The gimbal decreases unwanted vibration from flight conditions, such as extra wind, and decreases movement in flight, so it appears that your video footage may have been filmed on a track on the ground.

The camera on the drone will capture some beautifully smooth and stable full color video footage. Footage will look great, even if you try some cool tricks on your drone, even while you’re still recording complex maneuvers.

Overall, most people will be pleased with the exciting features of the DJI Phantom 4. Since this one was missed in time for Christmas 2015, it will be interesting to see if the 4 is extensively for the coming this year holiday season, or if DJI will come out with something even more fabulous than the 4.

What surprised many was the affordable $1400 price tag. While it’s a bit more than someone may be willing to purchase as a spur-of-the-moment gift, it’s certainly more affordable than some of the other professional quadcopters on the market today that run into the thousands of dollars.

If you’re like most drone enthusiasts, you’ll love to get your hands on the DJI Phantom 4, so you can try out the cool tap to fly function, or the simple visual tracking function. Even the sports mode with its faster speeds is sure to excite more drone pilots.

Be sure to get one of these into your shopping cart fast, as when they’ll mass-released to the entire toy market, they’re sure to sell out fast. Avoid disappointment and order one now.