Amazon Can Deliver Packages in 30 Minutes – But Do You Want Them to? 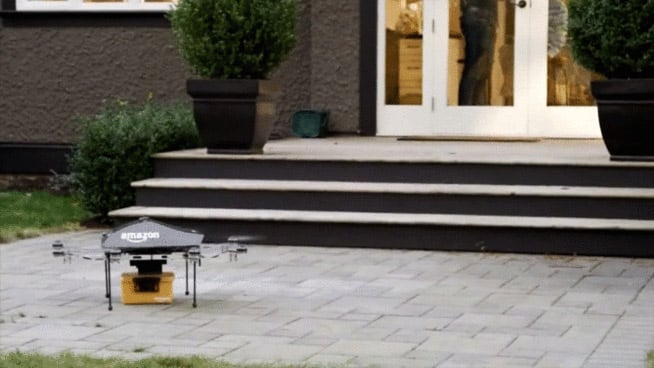 Many people have already heard about how Amazon is proposing to deliver packages from their Amazon warehouse directly to your door. Just how can that be possible? Particularly when they promise 30 minutes or less. Amazon envisions the process to be entirely automatic. There won’t be an operator controlling individual drones.

Obviously warehouse location is going to be the first issue. If there’s a warehouse located within the 30 minute flight of a drone, packages can be delivered within that time frame. No one is certain how Amazon is proposing that deliveries may occur within 30 minutes in all regions—could they be planning warehouse expansion?

One major hurdle is gaining the approval of the FAA. Right now they are raising issues of safety, security, and privacy.

Since these drones will be flown remotely, and most likely by computer, how will a drone know if something is in their path, whether human, animal, building, or tree? Apparently there are complicated sensors built into the equipment. However, we all know how accidents can happen in a split second, and the unpredictability of a moving human, car, or animal.

The next issue is working on security. If packages are delivered to the door step, how can Amazon guarantee that the homeowner will receive their package? What if they’re stolen off the doorstep? There’s no contingency in place to gain a signature.

Privacy may also be an issue. Since the drones have sensors, they must also contain cameras to help navigate their flight. What happens to the privacy of people in their private yards, or for drone cameras that can see into homes? Is the footage stored, or is not recorded at all?

Just how feasible are Amazon drones?

Amazon claims that they are getting close to having their flying drone technology working by the end of the year. But the FAA is concerned, and is currently writing up new regulations. These potential new regulations may scupper the plans to have flying drone delivery within the next few years.

Is flying drone delivery a wave of the future?

Flying drone delivery sounds great, in theory. Who doesn’t want their order to arrive 30 minutes after payment? Even a trip to the corner store takes longer. Imagine having groceries delivered every day, and placing orders to replace broken or worn items, and receiving replacements immediately. We are an instant-gratification society.

The FAA says that new regulations should be in place by December. Amazon says that’s not fast enough. Their technology is exceeding the pace of new regulations. The FAA is not only worried for what’s on the ground, but the potential for disaster in the air. Rep John Mica in Florida said that it’s only a matter of time before a drone collides with a plane and causes significant loss of life.

Right now, the FAA bans all but a few companies from using drones for commercial purposes. Drone fans are eagerly watching to see if Amazon gets its plan off the ground.