The Best Huntsman Knives in CS:GO 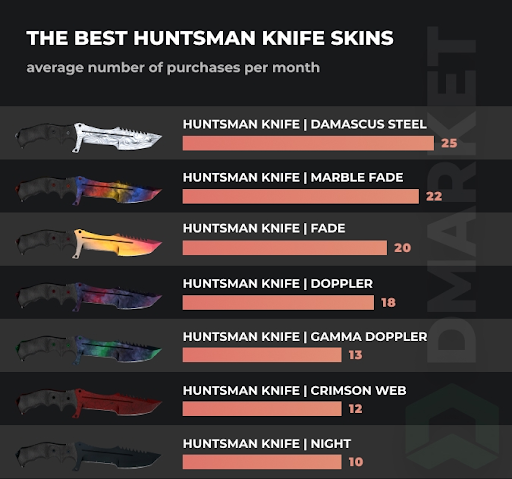 CS:GO is popular for its action-packed gameplay that requires skill, concentration, strategy, and communication, all at once. The magnificence of the game, however, is enhanced by the in-game virtual assets, which not only allow players to stand out but also let them make money by trading at digital marketplaces.

What Are Weapon Skins?

One such popular virtual asset in CS:GO is weapon skins, which you can obtain by various methods. They are entirely decorative in nature, and they don’t affect the gameplay. You can get weapon skins for free from weekly loot drops just by leveling up, or by playing on community or official servers. However, the chances of getting an expensive or rare skin for free are extremely low.

Otherwise, trading on digital marketplaces always remains a viable option. Factors like rarity and popularity regulate the price of skins, and so do other factors like wear and tear. Skins like huntsman knives can go as high as your monthly rent, but you can always scour the marketplaces to get something worthy within your budget.

Huntsman Knife is a dual-purpose knife designed for combative and utilitarian needs, introduced to the game in 2014. According to the official description, it is suited to modern tactical uses. The unique Tanto-pointed knife facilitates maximum penetration through the hardest of surfaces.

It is quite unlikely to get a Huntsman Knife from opening a weapons case, so you’re left with the sole option of buying if you want to get one. There are around 20+ Huntsman Knife skins available, and the number varies due to constant addition and removal by Valve. This article is going to feature the best Huntsman Knife skins in CS:GO and their estimated prices on the marketplaces. 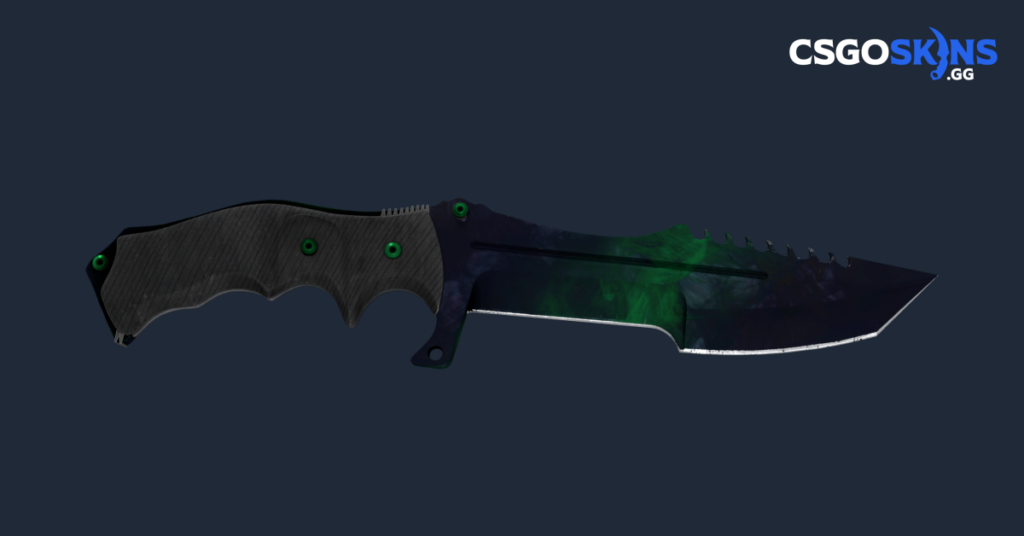 Released on 21 September 2021, the Huntsman Knife | Gamma Doppler can be found by opening a Dreams and Nightmare Case. It is an extremely popular knife with a drop chance of just 0.26%, which means that the rarity of the knife is Covert (extremely rare). It is available in two combat versions: Factory New and Minimal Wear.

The knife earns its name from the Gamma Doppler finish, in which it is coated in a multicolored pattern over a black and silver base. The starting price of this knife is more than $200, but StatTrak™ versions can go as high as $350. Despite being rare, the skin is widely available on digital marketplaces. 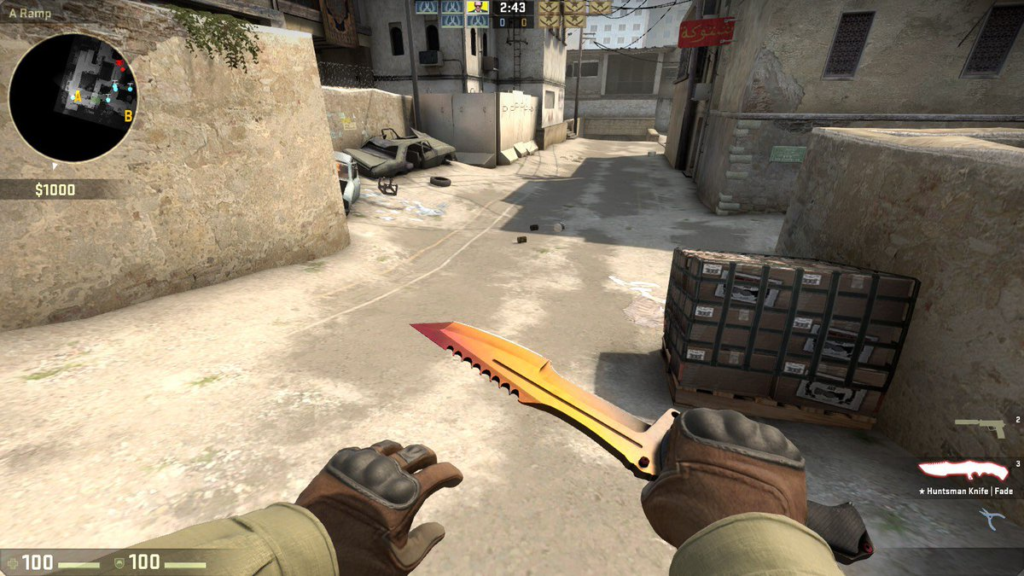 Fade was introduced in 2014 as part of the Huntsman Weapon Case and is one of the most expensive skins of its type. The knife has a chrome-colored base, with transparent airbrush paints faded together over the base. It is available in two versions as well: Factory New and Minimal Wear.

With a 35% popularity, the knife is still quite expensive owing to its extremely rare drop chance of 0.26%. The starting price of this knife is around $230, but it can go as high as $400 depending on the market (and the version as well). It is widely available on different marketplaces. 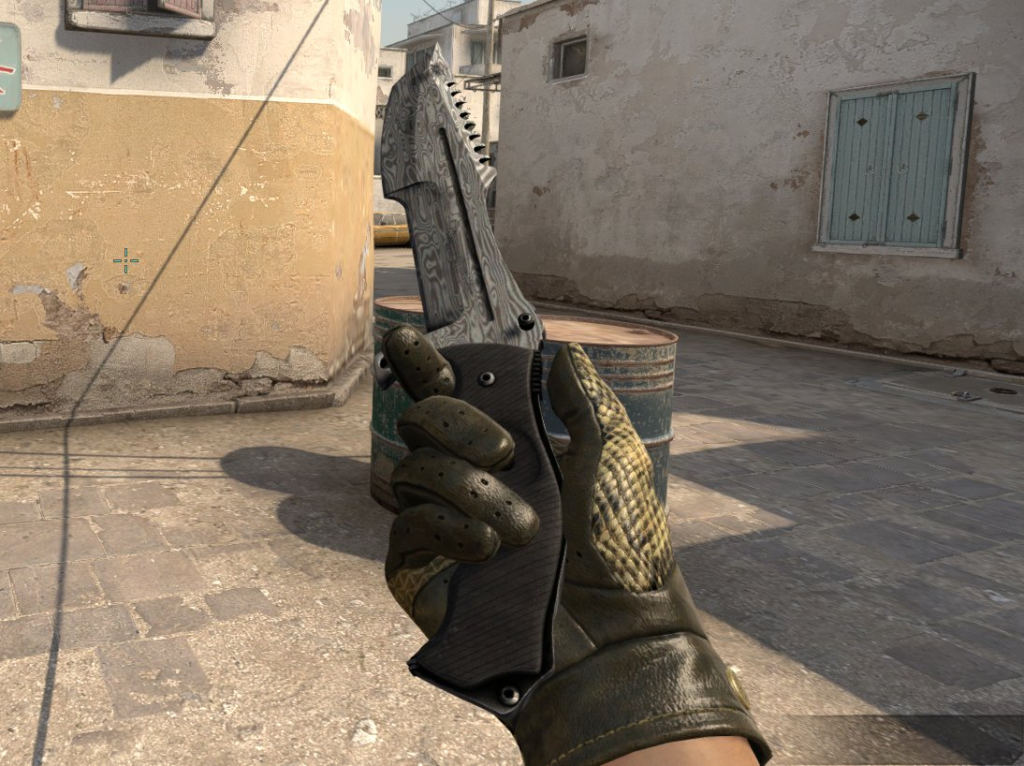 Found in Spectrum 2 Case containers, Huntsman Knife | Damascus Steel was introduced to CS:GO in 2017. Made from two different types of carbon steel, the knife has been painted in “patina” style — where a non-reactive, hardened shell coats the metallic parts by a chemical reaction. The base color features a white tint, coated with different patterns of darker shades.

Damascus Steel’s availability covers the entire spectrum. All Factory New, Minimal Wear, Field-Tested, Well-Worn, and Battle-Scarred versions are available on marketplaces. The knife is extremely rare (Covert) with a drop chance of 0.26%, and is quite popular as well. Damascus Steel is a bargain, with its price typically hovering between $100–$120. 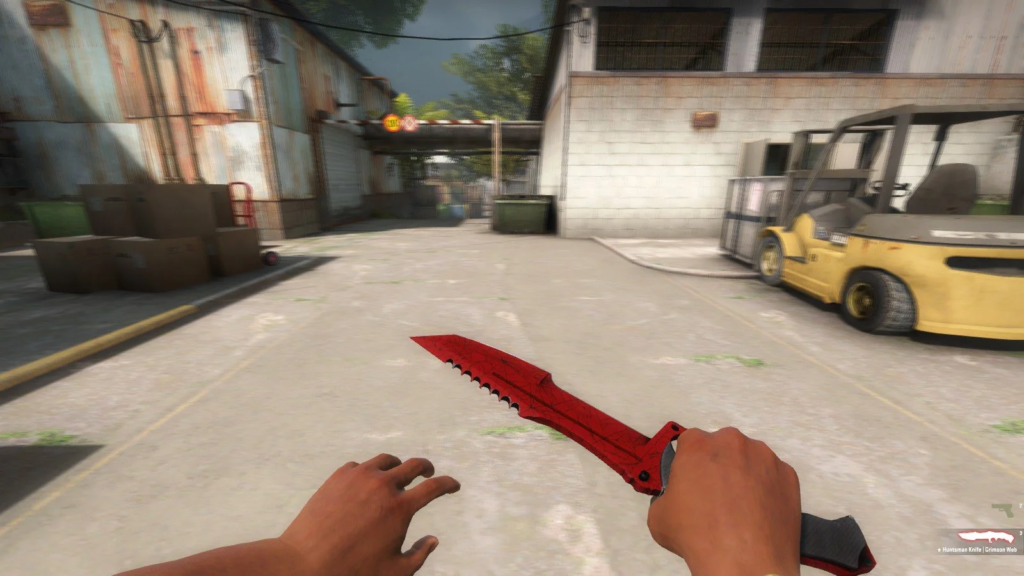 Crimson Web is also part of the Huntsman Weapon Case added in 2014. The knife has Covert rarity (extremely rare), with the entire spectrum available ranging from Factory New to Battle-Scarred. Painted in a “Hydrographic” style, the knife has a crimson-red base coated with a black spider web pattern.

The knife is one of the most popular items on CS:GO and is usually found in abundance on marketplaces. The price of the Battle-Scarred version starts from just above $100, but the Factory New version goes as high as $700, making it one of the most expensive Huntsman Knife skins. 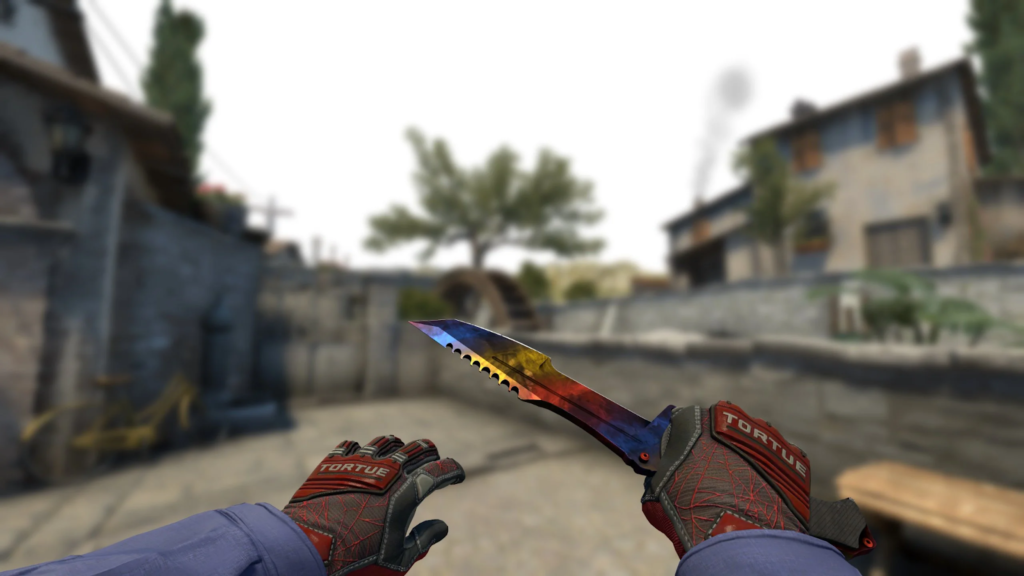 Marble Fade is the last one on our list. The knife is a visual delight, with black and metallic base paints coated in a multicolored pattern with a marble fade finish. The three colors are blue, red, and yellow. It was launched in 2017 as a part of the Spectrum 2 Case.

The price of the Huntsman Knife | Marble Fade starts from $200 but crosses $250 for Factory New versions. Only two versions are available as of now: Factory New and Minimal Wear. It has Covert rarity with a 0.26% drop chance and is extremely popular among players.

There are approximately 20 other Huntsman Knives that did not make the list, however it’s recommended to check them out in the CS:GO database to ensure you are not missing a hidden gem. Tiger Tooth, Slaughter, Ultraviolet, Autotronic, and Doppler are among those Huntsman Knife skins.

What Determines the Rank of a Weapon Skin?

The cost of a weapon skin changes over time and should not be used as the sole reason for ranking one. Take into account other factors before rating a skin — popularity (demand), supply, drop chance, and wear and tear. Specific patterns inflate the price of these skins, and so do popular owners of these digital assets.

A Beginner’s Guide to Choosing an Online Graphic Editor

What is an Inverter Generator? Answers & Best Models