Ori and the Will of the Wisps – Our Review 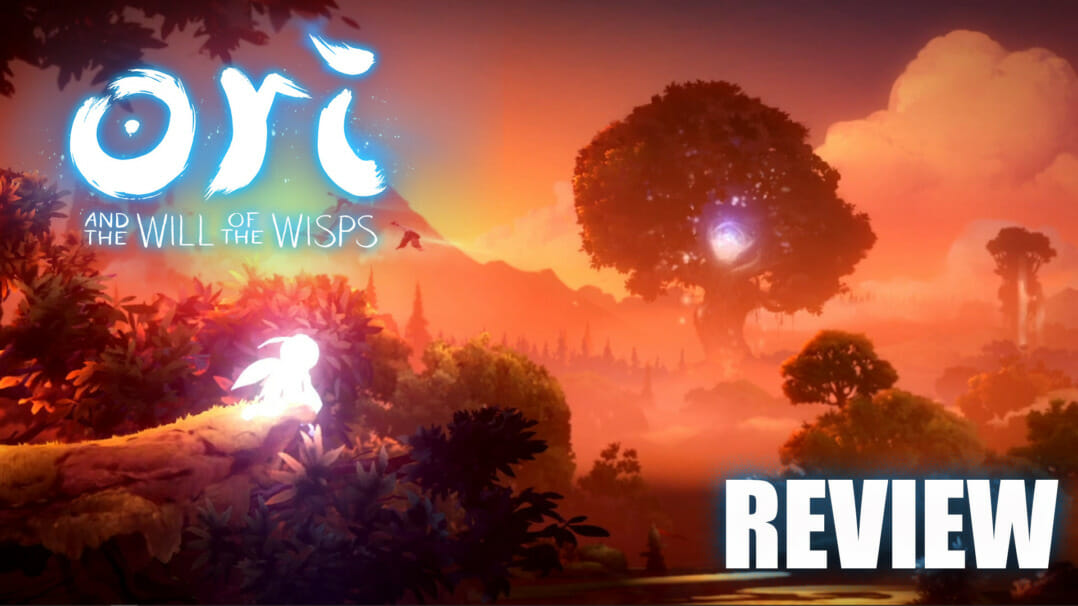 Ori and the Blind Forest was one of the best metroidvania games I have ever played. Competing with titans the likes of Castlevania: Symphony of the Night, Hollow Knight, and Super Metroid, its sequel had big shoes to fill, to say the least.

And fill them it did because Will of the Wisps isn’t just a worthy sequel to a superbly built game; it surpasses it in almost every possible way.

As with its predecessor, Will of the Wisps kicks things off with a tear-jerker of a sequence. Picking up where Blind Forest left off, we see Ori, Naru, and Gumo living a peaceful life with their newest family member, Ku, the only descendant of the mighty owl Kuru.

With time, Ku becomes old enough to feel the call of the wind, urging him to finally spread his wings and take flight. Unfortunately, one of his wings lacks enough feathers so, despite Ori and her companions’ encouragement, Ku is unable to fly. After Ori finds one of Kuru’s feathers, a last parting gift, she and Gumo help attach it to Ku’s wing.

With her parent’s last remaining artifact, Ku is finally able to soar and takes his sister Ori for a ride. But their time in the air is short-lived as a violent storm separates the duo, with Ku whisked away by the winds and Ori plummeting to the ground below.

When our Spirit guardian finally comes to, she finds herself in a part of the land called Niwen, surrounded by the shy yet helpful Moki. With her Spirit powers and the help of this tribe of creatures, Ori has to embark on a quest to find and rescue Ku. 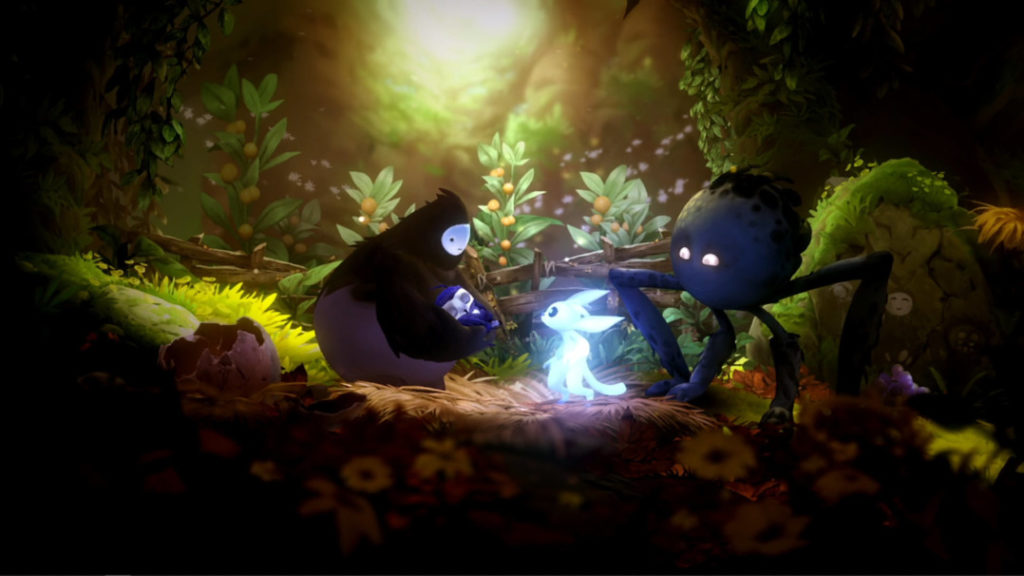 Right from the beginning, Will of the Wisps makes a powerful attempt at tugging at my heartstrings and it succeeded. From the game’s predecessor, we know that Ori is an orphan, which is what makes her bond with Ku so powerful.

The game doesn’t try to hide the fact that something terribly wrong is about to happen in the prologue yet carries on riding the narrative with me invested right off the bat.

Developer Moon Studios has once again demonstrated their mastery of the old storytelling mantra “show, don’t tell”, a method that permeates throughout the game. Though this time around we get a fair bit more telling, the showing has also increased and evolved. Every corner you turn, every event you encounter is a thread in the weave of Will of the Wisp’s narrative and world-building.

Naturally, it all ties together by the emotionally charged and sublime score composed by none other than Gareth Coker.

The melodious soundscapes and tunes are woven into every aspect of the game, masterfully transitioning at every twist and turn. One moment you’re running through the deep, dark wood, a calm melody accompanying your every step and jump. 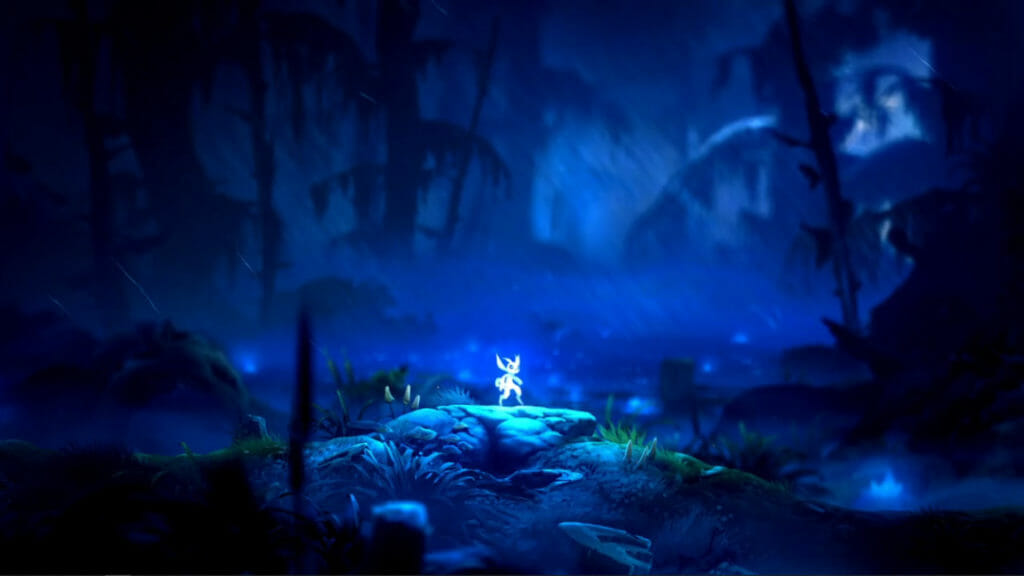 The next, you come face-to-face with a ferociously huge set of fangs as a booming, ominous track drives the precariousness of the situation home. Needless to say, this is a game you should play with headphones on. Besides the score, Will of the Wisps is filled with the sounds of skittering critters, rushing water, rustling leaves, and snarling jaws.

The levels of ambiance are by far the best a metroidvania has been able to pull off. It’s an immersive experience that doesn’t even need the added dimension to make feel like you’re a part of the game’s world. And I haven’t even gotten to the visuals, yet.

Throughout my time with Ori and the Blind Forest, I couldn’t help but draw comparisons to children’s storybooks. Will of the Wisps was no different. Everything, from the delightful characters to the forest settings has been crafted to feel like you’re going through a magical yet perilous journey.

What particularly struck me were the ability and ambient effects. The burst of light that comes from landing one of Ori’s spirit attacks flashes with spectacle against the stark backdrops of some of the game’s more underground locales.

Creature designs are also stepped up considerably this time around. Whether they’re friend or foe, the various denizens of Niwen have a fairy tale vibe to their silhouettes with a few subtle differences to their details and movements that define whether they’re menacing or extending a helping hand.

Even more impressive are the gargantuan bosses. If their towering over Ori wasn’t frightening enough, their dark colors and sinister features made them even intimidating. I was genuinely scared for Ori when the first boss had us cornered with nothing but a flaming torch to defend ourselves with.

Needless to say, the addition of big boss fights was definitely a good choice on the development team’s part and they stuck the landing marvelously. 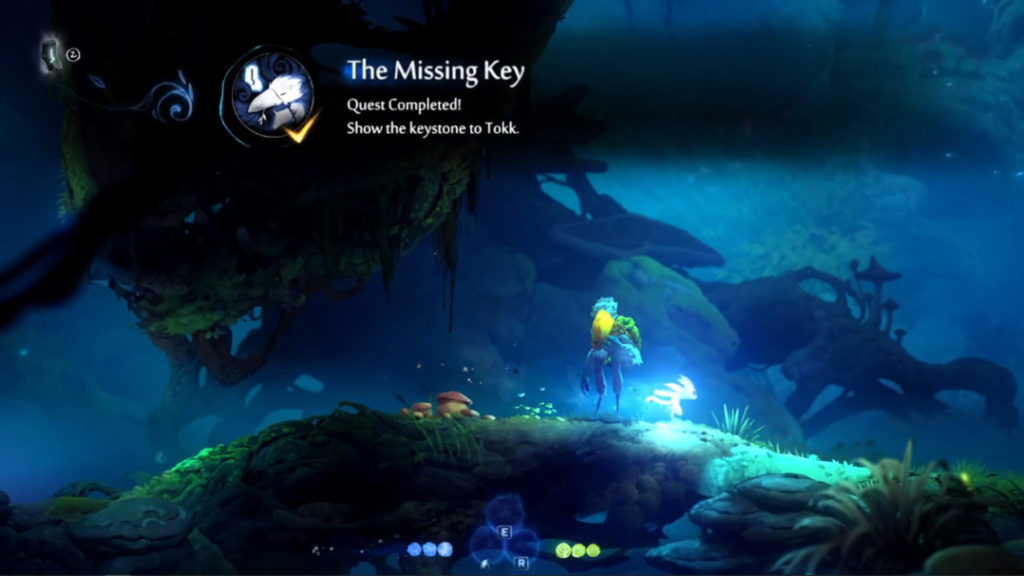 Not only are they all scary encounters from an aesthetic and mechanics perspective, but also they’re well balanced with a slight skew towards challenging. Where games like Hollow Knight tended to have a few encounters that were frustratingly hard to the point that I was glad they were over, Ori and the Will of the Wisps focuses on fewer yet highly memorable battles.

And this was the goal Moon Studio had set for these big boss encounters. Drawing onto the intensely memorable final chase in Blind Forest, they wanted to create encounters with gigantic creatures that would stay in the player’s mind.

As far as I’m concerned, mission accomplished as these were some of the best metroidvania boss fights I’ve ever experienced. Big nasties aren’t all that’s new in Will of the Wisps.

While Ori and the Blind Forest is a metroidvania title through and through, it lacked a certain aspect that makes the genre so great: gear and builds. As games with big sprawling worlds, it stands to reason that players enjoy having certain aspects of their character they can tinker around with and Will of the Wisps delivers with its Spirit Shards.

These items can either be found scattered around the world or can be purchased from NPCs and are used to define Ori’s playstyle. You can equip up to three to mix and match loadouts for different situations. Some grant our friendly little Spirit benefits, such as added defense and the ability to cling to walls without slipping. Others have powerful boons that are balanced out by equally detrimental banes.

For instance, one of the earliest Shards you can get grants Ori a huge boost in attack power but reduces her defenses, making her take more damage. Aside from opening up a whole new world of build customization, Shards are also a great way to allow beginner and casual players more ways to ease up the experience. 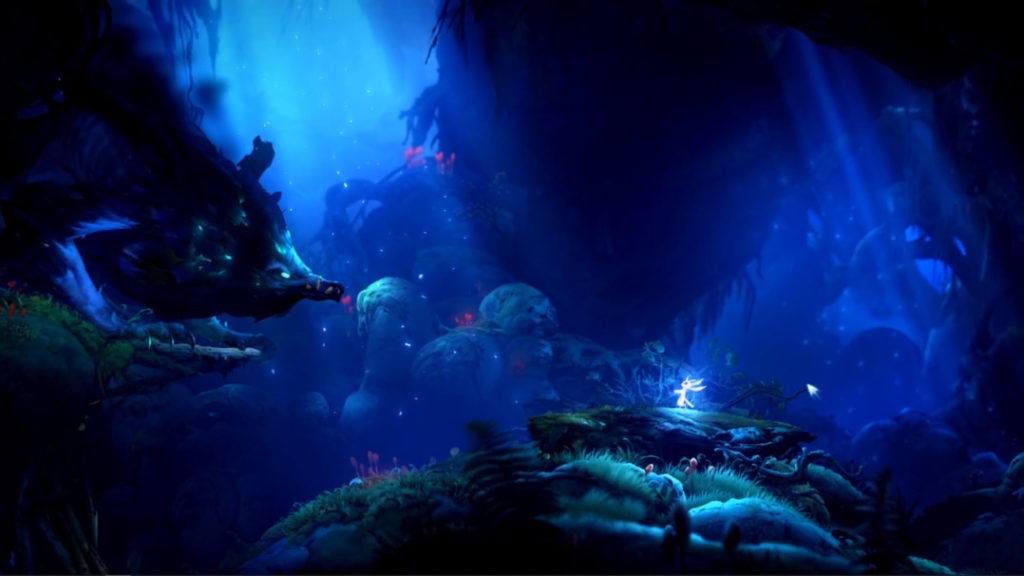 It’s not that Will of the Wisps is a punishingly hard game. Normal mode provides enough challenge that is still manageable without leading to moments of frustration. That being said, if Easy mode is as chill an experience as it gets if you just want to take in the story of the game.

Naturally, Hard mode is as grueling and perilous an experience as you could expect. Again, however, I never once felt in any of the modes like I was greatly hampered or underpowered compared to the world and enemies around me. It’s primarily thanks to the game’s superb pacing.

Controlling her feels tight and responsive, with a speed that’s easy to control without sacrificing a sense of agility. Every single one of Ori’s weapons also packs quite a wallop, making you feel powerful. I particularly loved the hammer that has an aerial ground pound meteor attack that also allowed to open up new pathways by destroying breakable ground.

To unlock new weapons, you need to buy them from Opher, the weapons master, in exchange for Spirit Light as you progress through the game. The majority of weapons cost spirit energy to fire but that’s primarily limited to ranged attacks and spells. 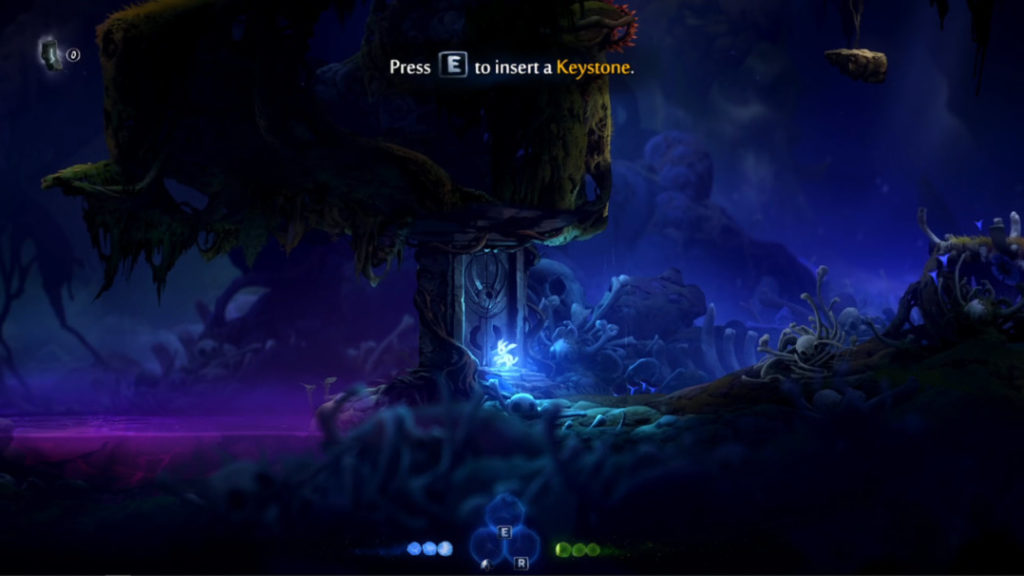 This leads to a combat system that’s mostly now focused on melee combat and I feel it’s a big improvement from Blind Forest. You can map up to 3 weapons and skills using a new radial wheel so switching up your loadout can be done on the fly.

Speaking of opening up pathways, you’ll be doing a lot of that in Ori and the Will of the Wisps. The map is pretty massive. According to the devs, it’s almost 3 times the size of that found in Blind Forest, which was already quite sizable. If that’s sounding overwhelming, I can assure you it is completely manageable.

Thanks to the map which you can gradually open up by buying new fragments from a special vendor, you’re almost never at a loss of where to go. Compared to Hollow Knight’s navigation which had me squinting a fair bit to find unexplored nooks, Will of the Wisps has a clearly readable map with plenty of filters to help you find what you’re looking for. On top of that, the game features strategically placed Spirit Wells that enable you to fast travel. All you need to do is get the Fast Travel skill early on in the game then start finding those wells to unlock more destinations.

Another addition to the game is the massively welcome auto-save feature. For those who don’t know, Blind Forest’s saves worked similarly to other metroidvanias where you have to return to specific save points in order to record your progress. While newer games in the genre add these points quite frequently, it always begs the question of why not just have auto-save. 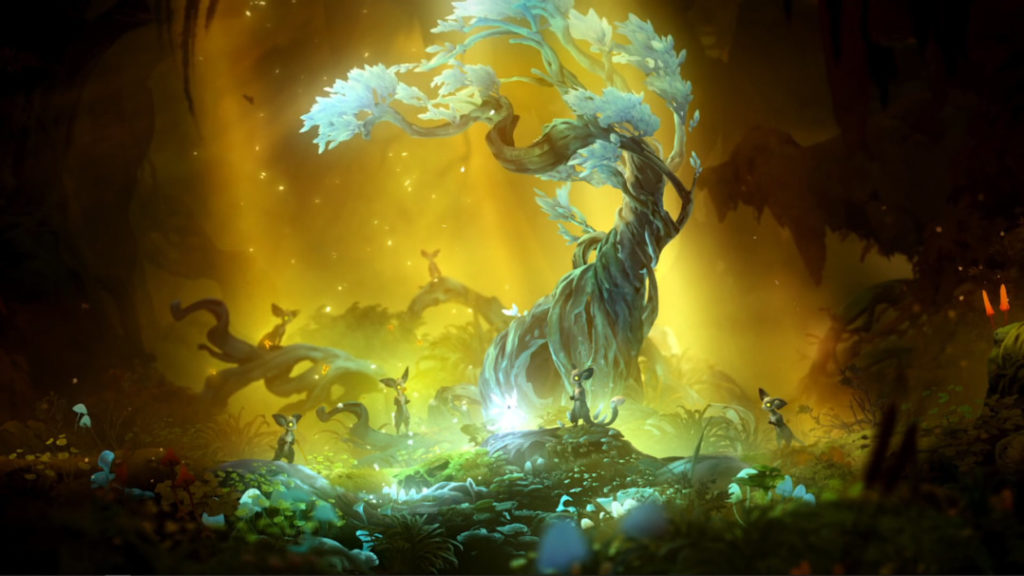 Well, Moon Studio has heard loud and clear. Combined with an incredibly forgiving checkpoint system that returns Ori to the previous screen which is almost always near where she died, Will of the Wisps’s progress recording is top-notch. Every metroidvania should adopt this from here on out.

Ori and the Will of the Wisps played like an absolute dream on my Nvidia 1050 Ti GPU. Setting the game to Balanced settings gave me an incredibly stunning picture quality on my 1080p monitor without dipping in performance.

One thing to note is the reports of performance issues at launch which were greatly hampering the game’s overall experience. As I played the game over a year later, those issues seem to have been ironed out. If you’ve got an even more capable machine, you’re likely not going to have any issues running this gorgeous game.

My time with Ori and the Will of the Wisps was without a doubt an incredibly enjoyable one. From the opening prologue run up until the credits rolled, it’s been a journey filled with danger, wonder, and exploration.

The powerful Pixar-like storytelling of its predecessor is still present and better than ever. The improvements to the game’s combat and upgrades, coupled with the addition of bosses and mini-challenges are enough to give Will of the Wisps its own identity without neglecting the legacy left by Blind Forest. 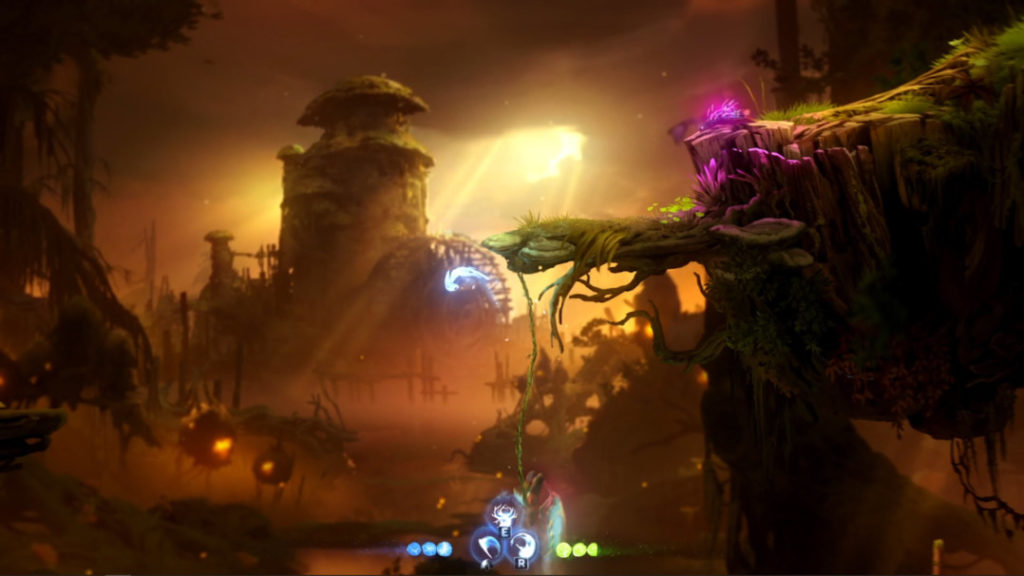 As a metroidvania game, it’s right up there with the greatest titles of all time. It’s tight controls and superb world make exploring a fun and exhilarating experience. Taking in the game’s narrative is an emotional rollercoaster where the high and lows are accompanied by powerful tunes and masterfully directed events and beats.

To say that I felt like a child experiencing a real story for the first time would be an understatement. And I’d be lying if I said I didn’t choke up as the final moments of the game came to a close. 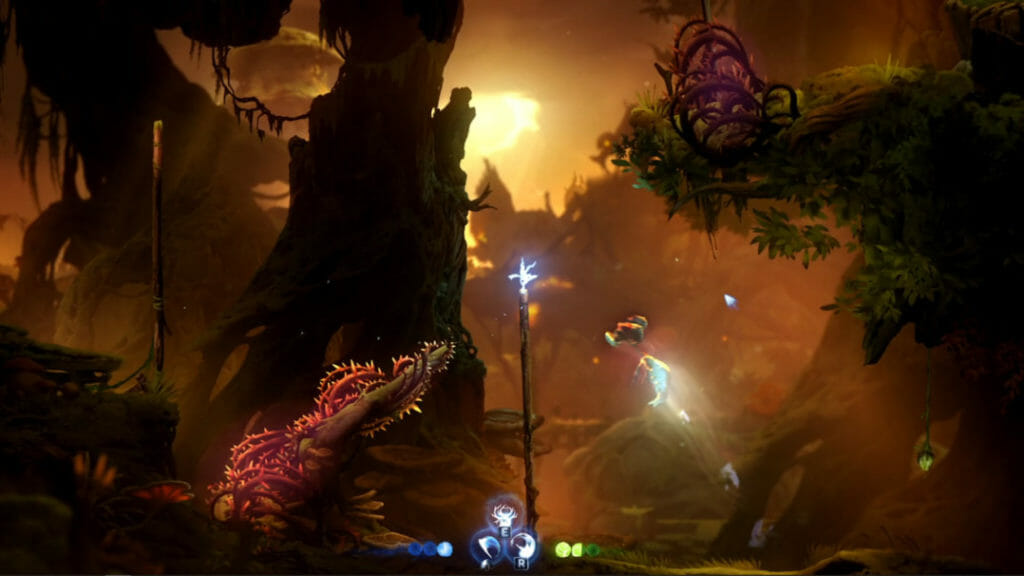 GDDR5 vs GDDR5X vs HBM vs HBM2 vs GDDR6 – Which Is Best For Gaming?