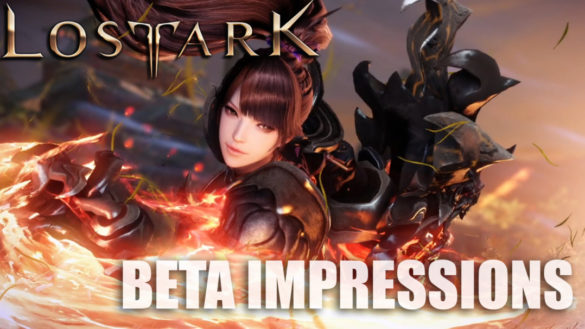 When Lost Ark first launched in South Korea in 2019, I was intrigued. It was a stylish-looking ARPG/MMO that immediately caught my attention with its over-the-top combat and intricate customization. Needless to say, I was looking forward to its Western release, which is finally coming after nearly three years, thanks to Amazon Games acting as publisher.

Lost Ark has been delayed with a prospective release window in early 2022 but, fortunately, I received an invite to the game’s recent closed beta. Naturally, I jumped at the chance to take the game through its paces and finally experience as much as it has to offer as possible.

I’m going to start by classifying Lost Ark as a game. I feel it’s a necessary foundation to lay as the game is a mashup of two popular genres, ARPGs and MMORPGs. The immediate problem I’m faced with is which of the two is the most prominent. It very much feels like a chicken and egg situation.

Is the game an ARPG first, or is it an MMO? It’s hard to tell because Lost Ark does a bit of both but doesn’t always aim to shoot for the best aspects of either.

From the ARPG perspective, you get the punchy combat that’s a complete spectacle in itself. It makes you want to fight enemies endlessly, play around with combos, and watch increasingly larger groups of them explode in a splatter of blood and gore.

Instead of allowing you to indulge in that, though, the game is more interested in making you back-and-forth between areas and quest givers. Games like Path of Exile and Diablo 3 focus on keeping you in certain areas for long periods, decimating waves upon waves of enemies, and collecting loot. Lost Ark gives you the combat to do so but, instead, rushes you towards the next quest.

If you’re thinking this is a core tenet of MMORPGs that makes Lost Ark one of them, then you’re right. From this perspective, the game does play more like an MMO with an isometric view. You grab a few quests, head over to a zone, blow up a few enemies and collect a few items, then return to get your rewards.

However, the game lacks one crucial aspect of the massively online RPG genre, which is grouping. I didn’t find any opportunities to do activities with other players, including the instanced scenarios that signify the story’s culminating moments. You can matchmake with other players to do dungeons, which is an MMORPG feature, but there’s a distinct lack of that spontaneous social element that I look for in these games. The point here is Lost Ark’s classification will significantly depend on your own preferences and inclinations. To me, it feels like an ARPG and MMO have met halfway to create something unique. The result is a game with fun and exciting moments but commits a sin many RPGs have done away with years ago.

It gates most of its better gameplay and content for its later portions and endgame. You’ll probably think that this is normal for such a game, and you’re not off the mark completely. It’s pretty typical for endgame content to be the meat and potatoes of an MMO. However, that doesn’t mean that the leveling portions have to be boring.

If Lost Ark gave me more time to play around with its fantastic combat for longer stretches of time, I would have been a happier camper. There was one particular scenario where I had to take on several waves of enemies and a boss, a segment I thoroughly enjoyed because I got to take my Wardancer’s skills through their paces. But besides dungeons, this was the only instance that has stayed ingrained in my memory.

Let’s look at what does make Lost Ark a fun game, though. Combat is a big part of what makes or breaks an ARPG, and this game doesn’t disappoint with its offering. I chose to play as a Wardancer, which the game calls an Advanced Class of the Martial Artist. I’m not completely clear on what makes each Advanced Class unique.

To the best of my knowledge, a Wardancer can combo abilities together by using a mix of launchers and multi-hit attacks. It also uses an elemental gauge that opens up bigger skills that deal massive damage, ending in the aforementioned splattering of enemies. In a nutshell, there was never a dull moment when I got to fight enemies.

There’s something about using abilities in Lost Ark that makes its combat incredibly addictive. It could be that every blow feels punchy and impactful. Maybe it’s their open-ended nature that allows you to chain them any way you want.

Or, it could be that you’re taking out big groups of enemies in a swift and spectacular fashion. Whatever the case may be, it’s clear that Lost Ark wants me to feel powerful, and it achieves it to significant effect.

What’s also pretty cool about Lost Ark’s abilities is their customization system. As you progress through the game and gain levels, you earn skill points to spend on your individual skills. Every 4-5 points spent on one skill unlocks a choice of 3 upgrades that significantly change its properties.

For instance, after spending 4 points on a 3-hit ground attack (I do not remember the names of any of my abilities), I was able to add a fire effect to it that made my enemies burn for a few seconds after being hit. It’s a similar system to Diablo 3’s runes and, in the same way, is also very flexible. You can respec your skills at any time to try out new builds. All you need to do is subtract the necessary about of skill points and add them to a different ability. There doesn’t appear to be any restriction to how many times you can reallocate your points. As free-to-play games like Lost Ark tend to lock their respeccing behind a paywall, it will be a welcome one if this feature is part of the game’s launch version.

Lost Ark also wholly floored me with its dungeons, particularly those that featured story events. Upon reaching their final boss, you get treated to over-the-top cutscenes that set the tone for the fight to come. The battles themselves are also well-designed, giving you just the right amount of challenge that allows you to feel strong without overwhelming.

As one could expect, the first few dungeons don’t offer a broad mix of boss mechanics. They still have massive telegraphed abilities that force you to make copious use of the game’s dodge mechanic, though, which goes on a cooldown, so you can’t spam it. Dungeon cutscenes also had a feature I hadn’t seen before in an MMO, and now I want it everywhere.

While a scene is playing, players in the group can vote whether to skip it. In the bottom right corner, you can see a vote counter that appears each time someone in your team presses ESC. I tried using it myself to see what happens when the vote doesn’t pass.

You effectively are forced to watch it even if 3 out of 4 party members vote to skip. It’s still a reasonable compromise that’ll potentially lead to more skipping during hard mode runs since most party members will have already watched those scenes during the primary campaign. What concerns me is that there’s potential for trolling, though.

The next part I want to touch on is Lost Ark’s character creator, which is quite robust for an isometric game but also has its divisive point. When selecting a class, you’ll find that almost all of them are gender-locked. Warriors, for instance, are all male, while all Mages and Assassins are female. There are some exceptions based on Advanced Class. Martial Artists are all female except for the Striker, whereas Gunners are male except for the Gunslinger. In this regard, Lost Ark is more ARPG than MMO, but even the former in recent times has moved on from gender-locking.

This is very much a Korean game aspect that appears to still be prevalent in the mobile space. How you feel about it will entirely depend on your preferences. Personally, I enjoy playing female warrior-type characters, but Lost Ark doesn’t allow me to play as one, so that’s a slight disappointment.

Overall, Lost Ark does feel like it will be a fun time. Its longevity will significantly depend on how well its endgame holds up. I couldn’t get to the portions that involve exploring the world on a ship, but other reviewers and fans who’ve experienced the Korean version have stated it’s pretty massive.

The game also appears to feature a pet system that has its own benefits, including picking up items. Collectors will also note that there are mounts and other fabulous cosmetics to gather. The game also features a PvP system which I didn’t dive into as I’m not a fan of these modes in MMOs. In terms of features, therefore, the game has a ton.

When you mix in its incredibly spectacular combat, you get a fair amount of potential for a fun time.

It’s important to note that these pros and cons are based on a beta version of Lost Ark for its western release. I don’t expect a lot will change since the game has been out in South Korea for a couple of years now. Wireless B vs G vs N vs AC – What Is The Difference?