Flights of Fantasy – Looking to the Stars

5…4…3…2…1 Thunderbirds are go! How iconic is that saying? People of a certain age will identify with that phrase and be transported back to happier days sitting in front of the television waiting to be enthralled by the prospect of what was to follow.

The contents of the programme were always very advanced with sci-fi technology in abundance with space travel, rocket launchers and flying machines zipping across the globe at incredible speeds. How futuristic was that back then but what about now?

Back in 2013 an American science fiction film called Elysium told the story of how a ravaged Earth no longer felt safe for its occupants, so a company decides to build a rotating spaceship hotel complex named after the film title.

Set in 2154, the story tells how the rich get to live in luxury in outer space, whilst everybody else lives on our doomed planet.

Seems a bit far fetched, but spring forward to the present day, and guess what? Someone is thinking of doing exactly that, building a rotating space hotel.

The OAC Voyager planned structure for 2027 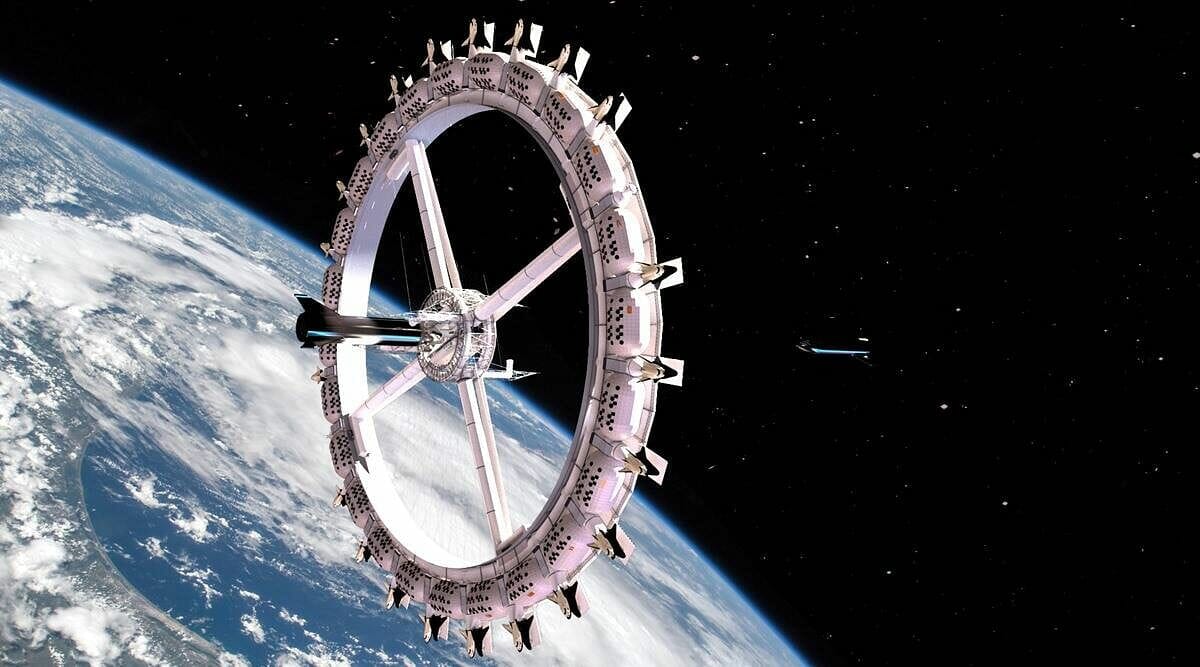 The world`s first astral hotel is planned to open its doors to its rich and famous guests for the first time in 2027, named the Voyager Class Space Station, it will accommodate up to 400 paying guests, and will offer the usual facilities that you would expect from a top class cruise ship, including restaurants, bars, cinemas, gyms, health spas, libraries and even concert venues on board. Guests will apparently travel to the home-away-from home destination onboard a rocket transportation system operated by Space X.
To stay at the hotel, paying guests will to endure a 15 week training programme, then succumb to 10 days of living in space conditions on the ground before embarking.
Whilst many of the stations 24 modules will be available to the public, others will be leased or sold to private investors or governments. A portion of the space stations facility will be taken by the crew, staff, air, water and power sources.

Orbital Assembly Corporation (OAC) an American company behind the adventurous project has announced that it will begin construction in 2025.

The structure will be made up of a large metal ring built in orbit around the Earth, and will rotate to generate artificial gravity for the occupants.

The station will be designed from the start to accommodate both national space agencies conducting low gravity research, alongside tourists who want to experience life on a large space station. Rooms will be connected to the centre of the ringed structure by tubes that resemble the spokes of a wheel.

The OAC unveiled details about the project during its first virtual assembly event in January this year. Founder John Blincow explained“ This will be the next industrial revolution, it will create a whole new space industry”. He went on to say “ that teams plan to test the concept with a much smaller scale prototype station before construction begins on a full scale model”.

“This will be the next generation”

Construction costs have yet to be revealed by the company, which is based in Rancho Cucamonga in California, but you can be sure it will not be cheap.

The facility will be similar in size to the international space station (ISS), and will orbit the Earth roughly every 90 minute`s, its gentle rotation will generate a low level of artificial gravity that mimics the forces felt on the surface of the moon.

However, the OAC are not the first group to float the idea of running a galactic hotel, last year NASA announced that a US start up company called Axiom Space, would design a commercial space facility for use on space tourism flights. 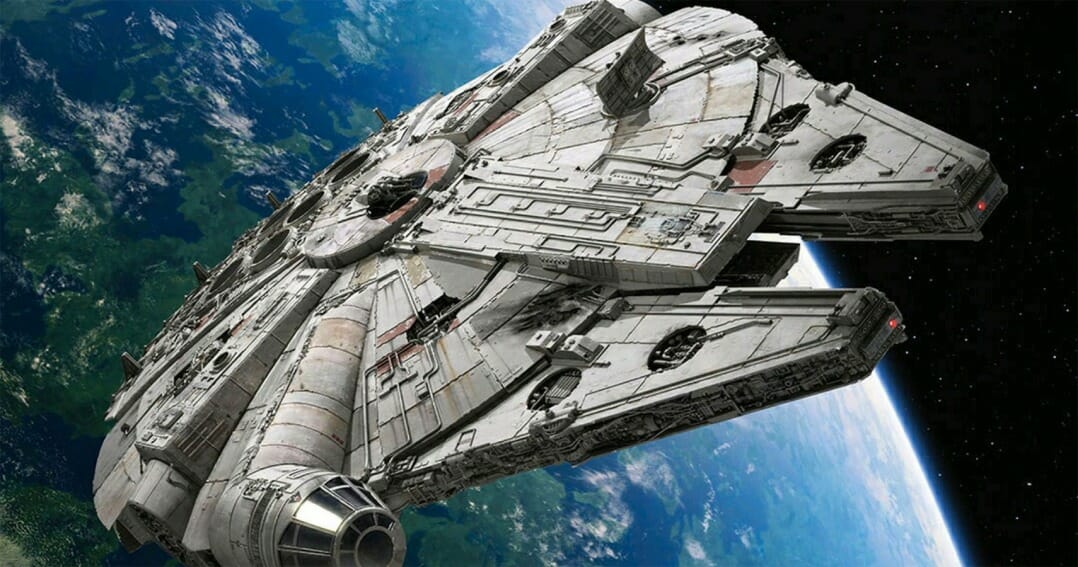 The £2 billion Axiom station will be about 250 miles above the Earth, and while it expects to mainly house scientists and researchers, space tourists will be made welcome.

However its not easy or cheap, a practice mission was launched by Axiom last year at a cost of $55 million (£40 million), slightly more than paying for an all inclusive 2 weeks in the sun on Earth.

At present the International space station is the only known permanent residence for space exploration, known as the ISS, the station is a large craft that orbits the Earth and is home to astronauts who go there to complete scientific missions.

During construction in 1998-2000, the astronaut engineers built the structure in space in many pieces, which were sent up individually and assembled.

Many countries, closely working together on its construction to obtain the finished structure, carried out the mammoth task.

Since 2000, astronauts have lived on board the station, spending time in shifts, conducting experiments on gravitational living.

NASA use the station to learn more about the effects that the conditions living and working in space has on humans. According to recent reports, living on the ISS is said to be like living inside a big 5 bedroomed house with gyms, lots of labs and a large window that overlooks the Earth below. 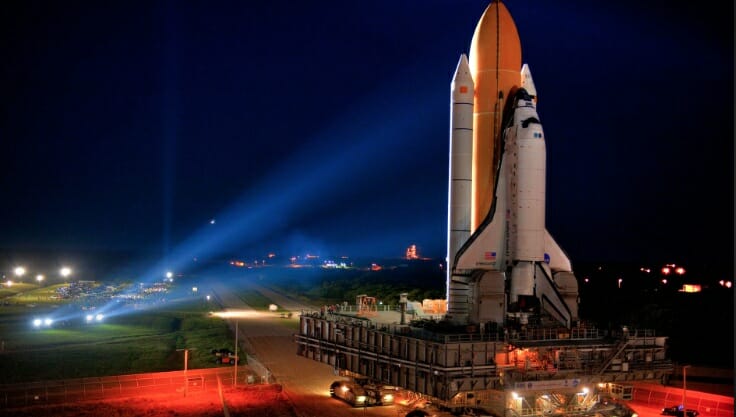 Vacation with a difference

If this is the future of holidaying, albeit out of this world, will it become available to the masses or just the rich and famous? It`s like the majority of new inventions, at first it costs a small fortune to own something new, only to reduce in price as technology and demand begins to lower the price.

Remember the first video machines that came out in back in the 1970`s ?  Owning one would have set you back around £700-£800, how times have changed, you can now purchase one at any boot fair in the country for about £2.00.

Mobile phones are another good example of how things change, my Wife bought a colour screen flip top version back in the 1990`s for £250.00, peanuts by todays standards, but at the time it was very expensive, now you can get a colour screen for about £15.00 in most supermarket chains.

Technology and the levels of engineering are evolving at a vast rate, it seems that everything we come into contact with gets bigger, better and more advanced.

You can now buy freezers that order food for you when supplies get low, devices that turn on heating, lighting and even run a bath, at this rate humans will become lazier over the next 50 years as they will have less to do and will rely on AI for everything.

Cars and vehicles are already becoming less dependent on an actual person being present, even deliveries have started to become autonomous.

Drones have become an essential working piece of kit, everyday they are being used in farming, deliveries`, filming and now military models that can collect wounded soldiers from the battlefield are being tested.

Even the government have now decided to reduce the amount of troops on the ground, and are plumping for more AI usage.

These inventions have become part of our everyday life, things that a few years ago would have been seen as futuristic and non -viable.

We at Bearingtech fully understand the importance of how technology and especially engineering has a role to play in any future experiments, having spent many years supplying engineering supplies to companies throughout Europe.

Throughout the years there have been plenty of famous spacecraft who have enthralled and exhilarated us all, either from a film, TV series or in the real world.

Have a look at the list below and pick your favourite one.

When you consider the concept of space travel, the first real explorations started way back in earnest in the late 1950`s and early 1960`s. Remember how the world marveled at Yuri Gargarin when he first orbited the Earth in Vostock 1? Nobody at the time thought that that could be topped, but guess what? Along came the Apollo missions and blew everyone`s minds, even today they are seen as outstanding and have this mystical feel to them, they even make blockbuster films about their exploits. Whether you believe that man landed on the moon or not, and many do not, the achievement of getting into space was incredible, especially as it was seen to be impossible at one time.

Not to rest on their laurels NASA went one better and invented a spacecraft that could actually return to the Earth and land on a conventional runway, this of course was the space shuttle, which carried out countless missions successfully until the fateful explosion on take off of Challenger which halted the programme.

Recently NASA, have sent a robotic craft onto the surface of Mars, and control it autonomously from the Earth whilst it records pictures of the martian surface, how astounding is that? 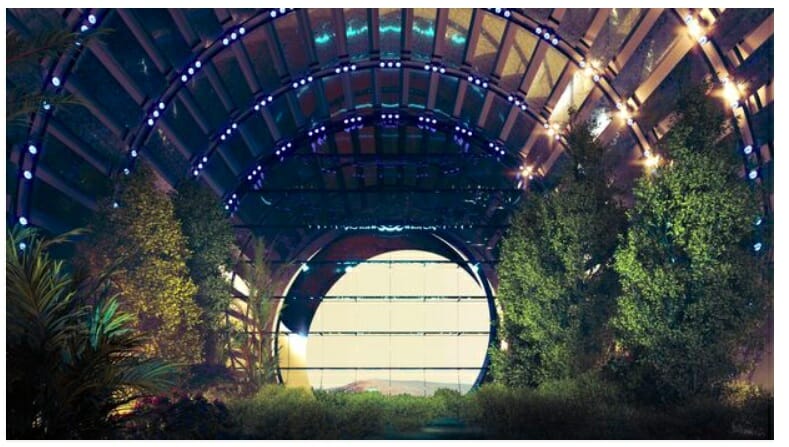 Talking of Mars, it has just come to light that the International Architecture Studio ABIBOO has released the first images of how the first city on the red planet will look.

The project, that is scheduled for construction in 2054, show the images of how the initial structures for the first human population could be, according to the current projections for future space travel.

Plans are being discussed to accommodate 250,000 people residing there, with designs to cover all aspects of modern living, including purpose built sports and leisure facilities alongside spectacular green domes that will act as parks for the residents, and will also double up as a place to try and grow experimental vegetation, with most food coming from the cultivation of crops that will make up half of the dietary needs.

With sustainability at the heart of the city, the plans show that the buildings will be vertically built instead of horizontally, limiting the effect of atmospheric pressure and radiation, the latter being deadly without proper shelter.

Whilst the construction is underway, instead of taking resources from the Earth direct to Mars, ABIBOO want to use the carbon dioxide and water available on the foreign surface to help create steel alongside other building materials.

Considering the hostile reputation that the planet has through films like Total Recall and the Martian, this is certainly a different view of what could be an incredible adventure, whether this will be achieved in our lifetime is another matter, but considering how things have evolved on Earth, only a fool would have the courage to dismiss it. 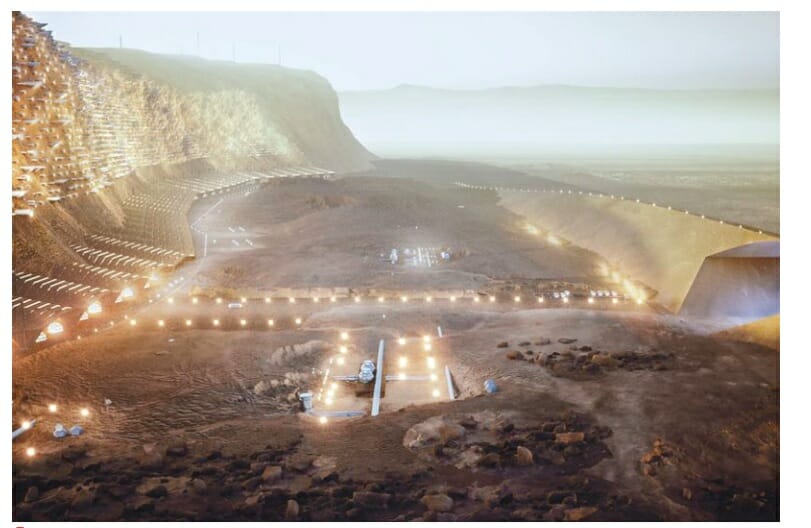 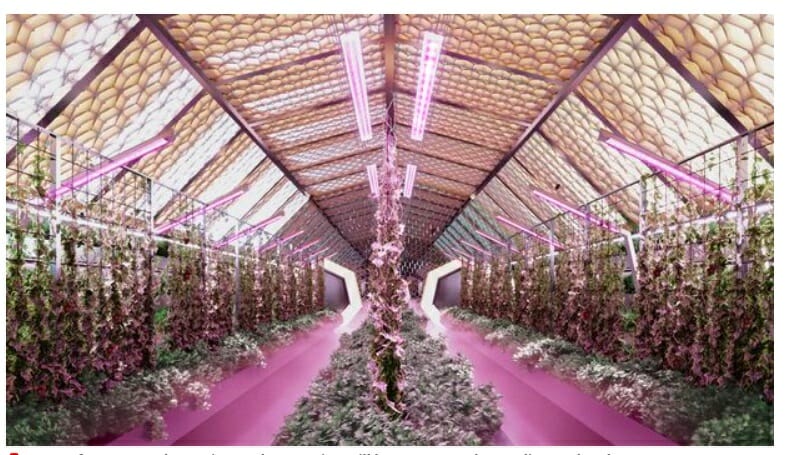 Alfredo Munoz, the founder member of ABIBOO said “ We had to do a lot of analysis based on computing and working with scientists to try and understand what the circumstances we might face”

The incredible designs might have been prepared in 2021, but construction on Mars would not be expected to begin until 2054, with the first settlers moving in almost 50 years later.

Pictures of the red planets proposed capital city called Nuwa, which is named after a mythological Chinese goddess, show homes, offices and leisure facilities based on scientific research from the Mars society and the SONet network.

The constructions will be mainly macro- buildings inside excavated rock from the cliff face.

If it comes off it will truly be an astounding piece of engineering.

Speaking of being astounded, how many people remember seeing the first Star Wars film for the first time and thinking WOW! Imagine that. Well how long will it be before such   science fiction vehicles become the norm and we all starting jetting from one planet to another?  Unrealistic?  Watch this space, literally!

Ultimate Review of the Best Smart Luggage in...

Best Games To Keep Your Mind Sharp While...

Ultimate Review of the Best Note-Taking Tablet in...

How To Choose The Loudest Headphones? How Loud...

How to Connect Soundbar to Sky Q Box...

How To Use An Electric Shaver?

Ultimate Review of the Best Laptop Cooler in...