Dishonored 2 Review: What Did We Learn From Active Play! 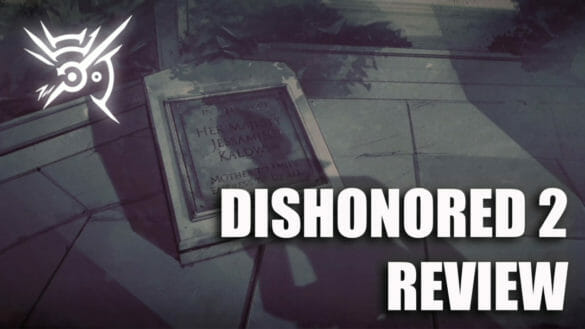 I teleport to a balcony to survey the area. Below me are patrolling guards blocking my only way into the target location. Around me are a few hiding spots. I blink my way to one and wait for one guard to approach. I take him out by grabbing him from behind and swiftly stabbing him in the heart.

After tossing his body into a dumpster, I perch myself onto an elevated position to finally come down on my last target before eventually advancing. It’s sequences like these that make Dishonored 2 an empowering experience that stands the test of time.

While my playthrough was primarily stealth-focused, Dishonored 2 follows the same “play as you want” mantra Arkane Studios built its reputation around. Whether you want to be a silent pacifist, a ruthless assassin, or anything else in between, the game gives you the tools and opportunities to do as you please. All 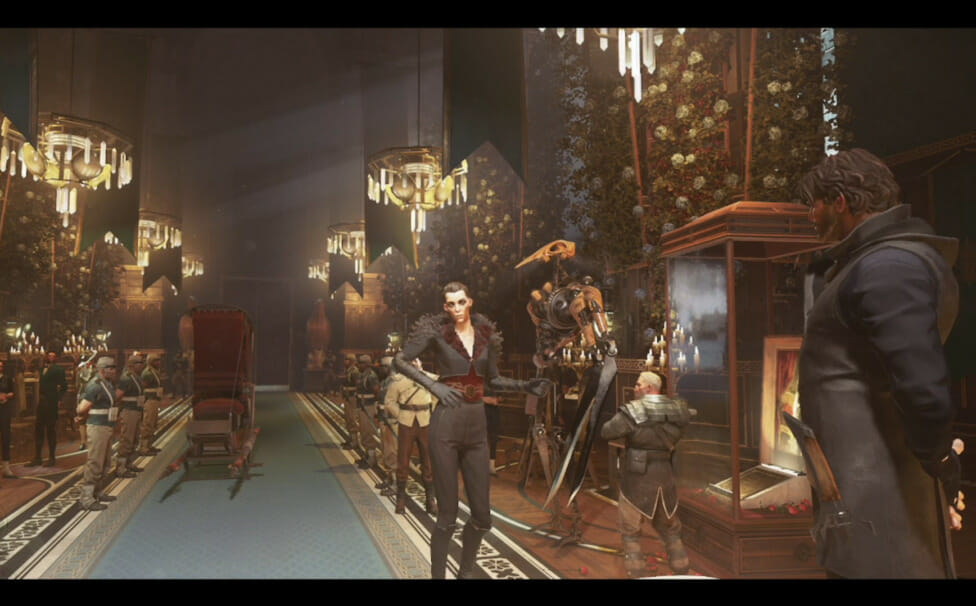 Dishonored 2 takes place 15 years after the events of its predecessor. Bodyguard and master assassin Corvo Attano has restored Jessamine Kaldwin’s daughter, Emily, as Empress of the Empire of the Isles, leading the country into a state of prosperity. Her reign, however, has been mired by the murders of Emily’s enemies performed by an unknown individual dubbed “the Crown Killer”.

As the bodies continue to pile, suspicions of Emily and Corvo’s involvement continuously grow. During a remembrance ceremony honoring Empress Jessamine’s assassination, the Duke of the land of Serkonos, Luca Abele, arrives accompanied by a witch called Delilah Copperspoon.

After the unexpected guest claims to be the former ruler’s half-sister and rightful heir to the throne, a coup begins.

This is where the game offers you a crucial choice to play as either Corvo or Emily. After making your selection, the other is turned to stone while you’re carried off to imprisonment. Once you manage to make your escape from the Empire’s capital, Dunwall, you meet up with Meagan Foster, who was on a mission to inform you of the Duke’s plans.

From there, you’re shipped off to Karnaca, where Delilah began her rise to power, to seek out the Crown Killer and clear up your name. 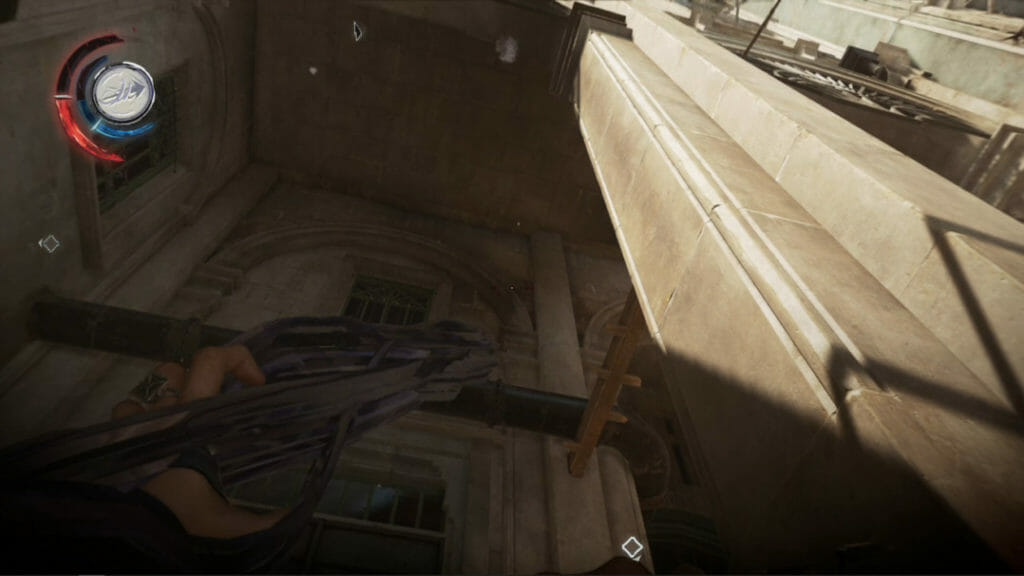 As you progress through the game’s missions, you’ll experience Dishonored 2’s tale of political intrigue and personal turmoil through cutscenes as well as introspective monologues of your chosen character.

The key story differences between Corvo and Emily lie in the details. The broad strokes narrative and events are essentially the same, while conversations with NPCs and internal monologues can be radically different. There’s no big compelling reason to play the game as both characters if you simply want to experience the whole story.

However, Arkane Studios have managed to brilliantly spread out its world-building between Dishonored 2’s protagonists, providing two distinct views of the perilous world around them. Being the main character from the original game, Corvo shows his experience with the politics of the land, thus making his observations insightful.

The much younger Emily, daughter of an assassinated empress, has a bleaker outlook fueled by revenge and anger. 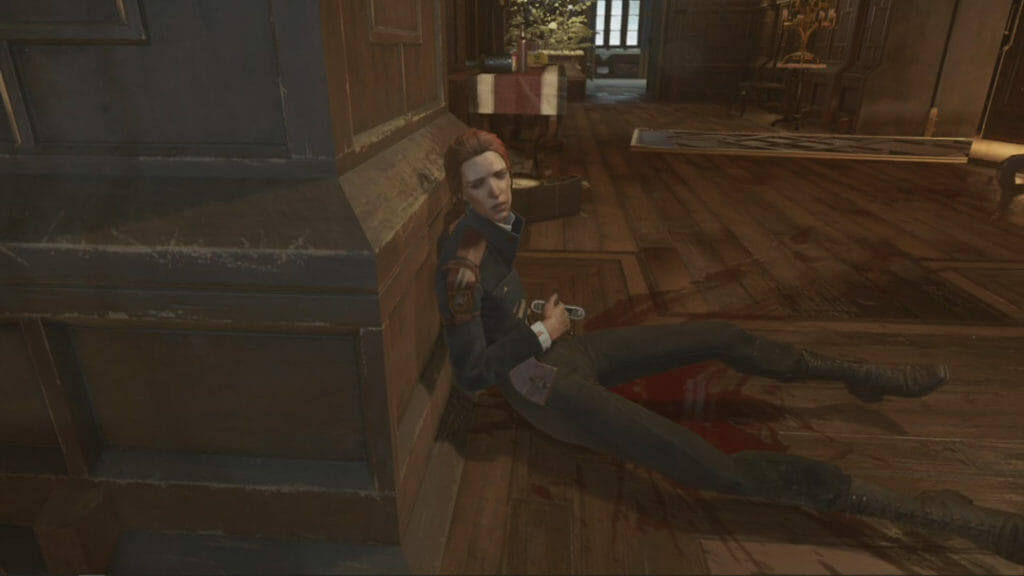 If I were to compare the overarching story of Dishonored 2, it would be with Game of Thrones. Both take place in a world where rulers rise and fall through both all-out war and cloak and dagger arrangements.

Their cruel politics stained with blood are the source of tragedy, their effects felt as you get to know the world itself. While Dishonored 2 is smaller in scope, it still manages to paint a powerful picture of a tumultuous world that often is consumed by dark forces, both human and supernatural.

I’d argue that the “known world” of the game is a more intriguing place to explore as its fantasy strands are better pronounced, highlighted by injections of steampunk elements. All of these aspects come together to form a world where respecting its dangers will take you far.

A stark world requires a matching art style, and Dishonored 2 delivers this in spades. Characters are modeled in fine detail with faces that have a weary, almost tired look that’s meant to instill this sense of precariousness that comes with existing in the game’s dog-eat-dog world.

Coming face-to-face with enemies gave me a sense of dread, particularly when they were able to finally impale me, their hatred for my character’s existence clearly painted in their angry frowns. It’s the perfect way for a game world to communicate to its player that it will eat them alive with every misstep. 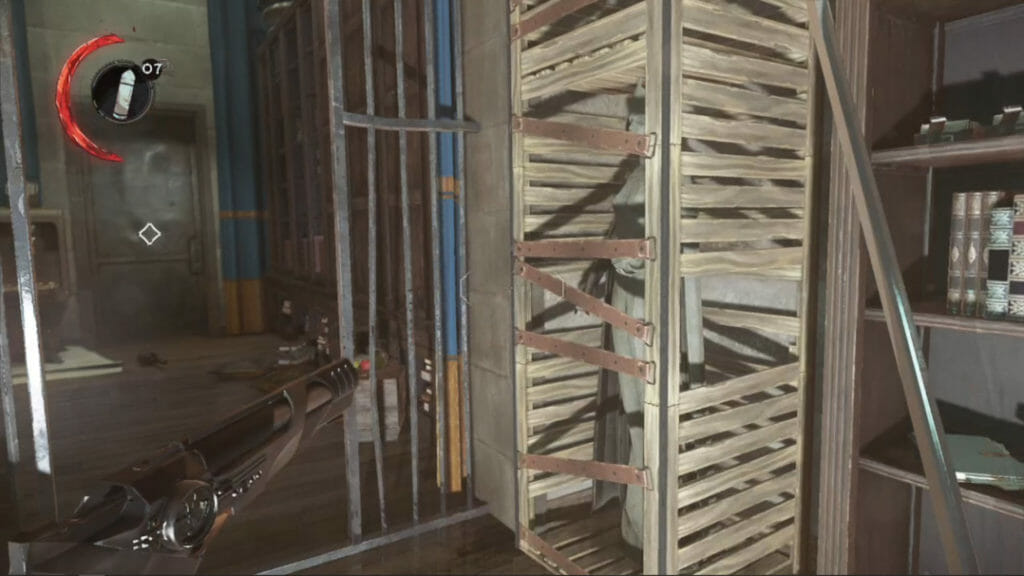 Characters aside, the world itself is also beautifully crafted with some of the best level design I’ve experienced in an FPS title. The city of Karnaca, where the game primarily takes place, is filled with nooks and crannies that house their own distinct details.

Looking around every corner you turn, you’ll find a variety of town amenities, building fixtures, and recognizable landmarks.

Considering the game wants you to play your own way, providing this much detail is like a “kill two birds with one stone” approach to design. On the one hand, you’re given various ways to perch yourself to mount your assault, while on the other, it just makes the city around you feel real and alive.

What tied the whole experience of Dishonored 2’s presentation for me was its voice acting. Whether it’s conversations in cutscenes, eavesdropping on unaware guards, or passing chats with NPCs, the performances delivered in the game are superbly emotive.

There wasn’t a moment when I felt that voice lines were undercooked or simply added to fill a gap. I was particularly enthralled by the performances of Stephen Russell as Corvo Attano and Erica Luttrell as Emily Kaldwin, both of which truly place you in the shoes of each protagonist by masterfully narrating their turmoiled inner dialogue. 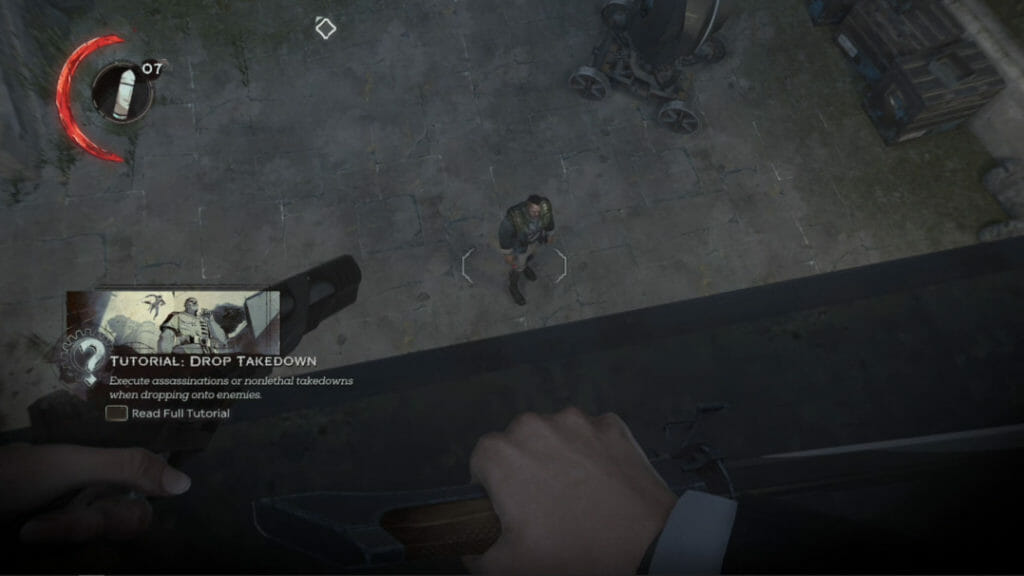 These internal talks serve as the perfect commentary to your guiding either protagonist’s movements and choices.

There are many games out there that try to deliver on the promise of making you feel like a total badass assassin. Dishonored 2 easily gives even the best of them a run for their money.

Through a combination of stealth mechanics, supernatural powers, traversal options, and build-defining trinkets, you can build a one-person-army character that can decimate foes in as conspicuous or inconspicuous a fashion as you desire.

Making your way through an area of Dishonored 2 undetected while dropping bodies left and right has an indescribable level of satisfaction I have yet to experience in other assassin-style games.

While both Corvo and Emily can play any way you desire, they have some critical distinctions in their playstyles. For my playthrough, I chose the fallen empress as my vessel. The traversal ability she’s given from a supernatural figure known as The Outsider is called Far Reach. 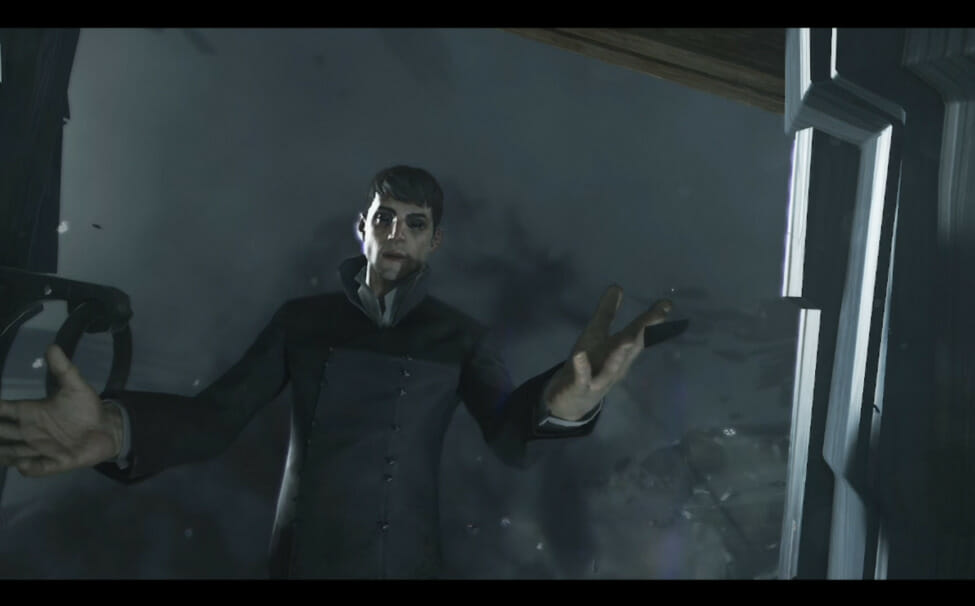 In its early form, it enables Emily to pull herself towards any location at a short distance. Over time, you will be able to upgrade it to act as a sort of Jedi Force pull that allows you to yank in objects from the environment as well as foes. And I won’t lie. Pulling enemies straight onto your sword is quite fun.

Moving around the world of Dishonored 2 undetected is the name of the game, particularly during the earlier missions where you’re pretty underpowered. Being spotted or making noise will inevitably lead to a swarm of enemies ganging up on you, which will more than likely mean you’re toast.

For this reason, I found myself crouch walking for the most part as it placed me in a stealth state, lowering my foes ability to detect me. Through a combination of Far Reach and stealth movement, I was able to gain some mastery of the game’s levels, granting me more freedom and confidence when exploring.

As my powers were upgraded through finding runes I detected by using an artifact called The Heart, my Emily grew into a shadowy angel of death. One of my earliest upgrades allowed me to instantly disintegrate enemies I killed from stealth, removing the need to hide bodies and increasing my stealthiness further. 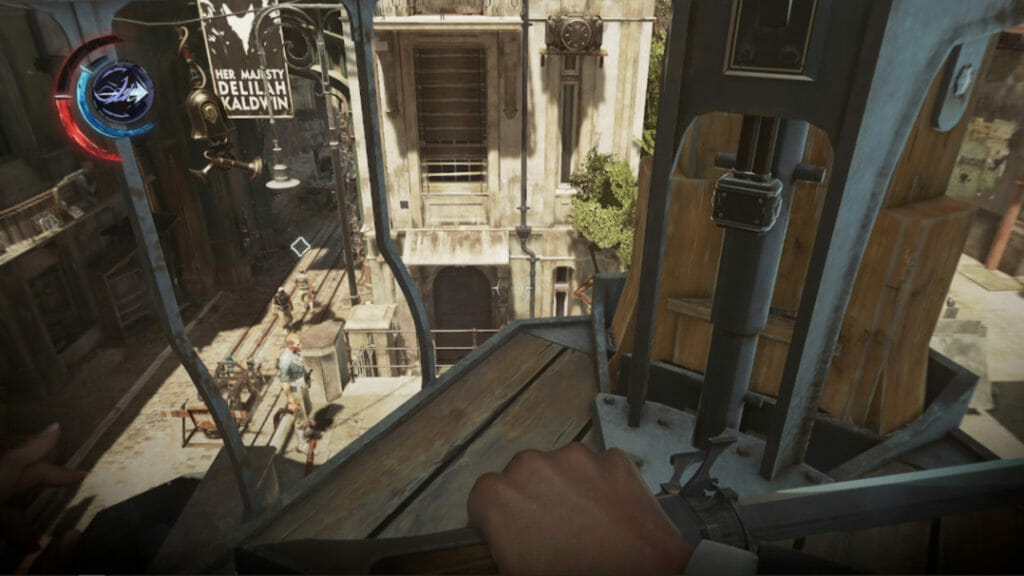 It’s through the discovery of runes and Bonecharms (build-defining trinkets) that Dishonored 2 encourages you to explore its various levels. However, there’s no backtracking in the game, so if you want all of the pickups, you’ll need to find them all before each mission is done.

Though missing out on some isn’t the end of the world as the game lets you craft them down the line, it would have been nice if this wasn’t buried in an optional tutorial.

Beyond stealth and assassination, the game provides you with a few more weapons to aid you in your quest. Apart from your sword, early on, you gain access to a pistol. Mission 2 also provides you with a quieter crossbow for stealthy kills from a distance. Both ranged weapons, however, need to be used sparingly as ammo is relatively limited.

I found myself only using the pistol as a last resort when I was spotted. Your sword can also be used to fight enemies, allowing you to block and parry attacks to open up enemies for a counterattack. Like most first-person games with melee combat, however, Dishonored 2 feels somewhat clunky.

I also found the parry timing to be somewhat inconsistent and almost unusable in most situations where I had to fight enemies in straight combat. 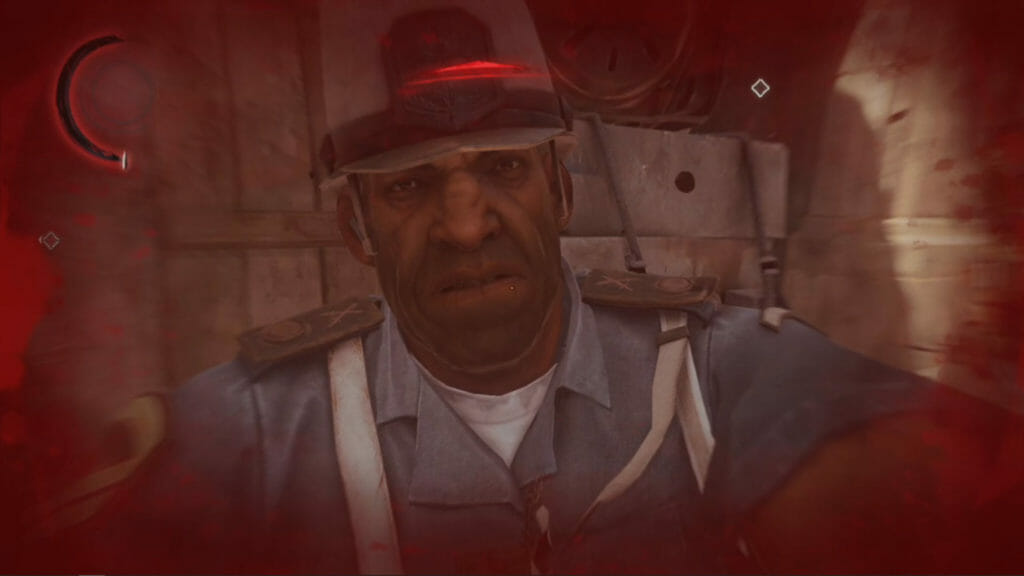 Without spoiling much, I want to quickly highlight that Dishonored 2 is home to two missions that are widely considered pinnacles of level design: The Clockwork Mansion of Kirin Jindosh and Aramis Stilton’s estate. Both will not only put your assassination skills to the test but your puzzle-solving ones as well.

The former is a level with an ever-changing layout that’s crawling with four-armed steampunk robots, while the latter tasks you with using a mystical clock that allows you to shift between the present and the past.

After experiencing both, I can safely say that every gamer should play Dishonored 2 if only simply to have these two notches under their proverbial belt—all part of a grander puzzle where all the pieces fit perfectly together.

The true triumph of a masterfully crafted game lies in its ability to conduct all of its parts together like a philharmonic orchestra, leading to an experience that’s greater than the sum of its parts. Dishonored 2 delivers on this promise to near perfection.

Its simplistic and slightly cliched revenge story is enhanced by cleverly sculpted world-building. In turn, its well-directed voice acting and bleak art style make the world both look and feel like the burdened land it’s meant to be. 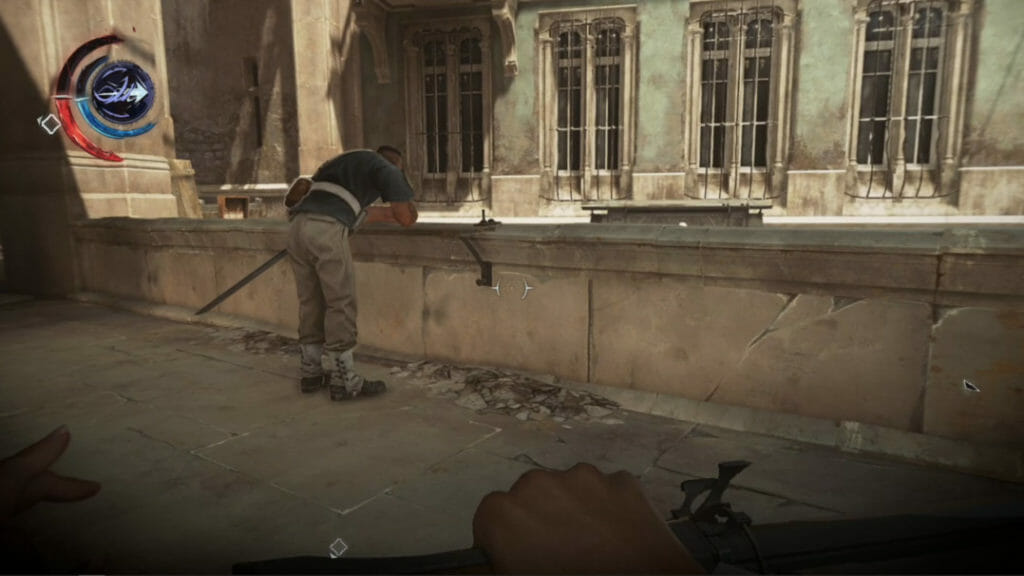 All of this envelops the player, instilling them with precaution and forcing them to make their combat and traversal choices wisely.

To say that Dishonored 2 is an FPS with stealth elements is a gross injustice. It would be better summarized as a game of open possibilities, a playground where you can choose between the path of stealth and the road of chaos or even taking the cross-sections where the two meet.

You can play it like an FPS or a stealth game. You can blend the two whenever you feel like switching things up. It’s also the perfect game to challenge your gaming chops with the likes of a full pacifist playthrough. Whichever way you choose to play, Dishonored 2 will provide you with an experience unlike any other game out there. 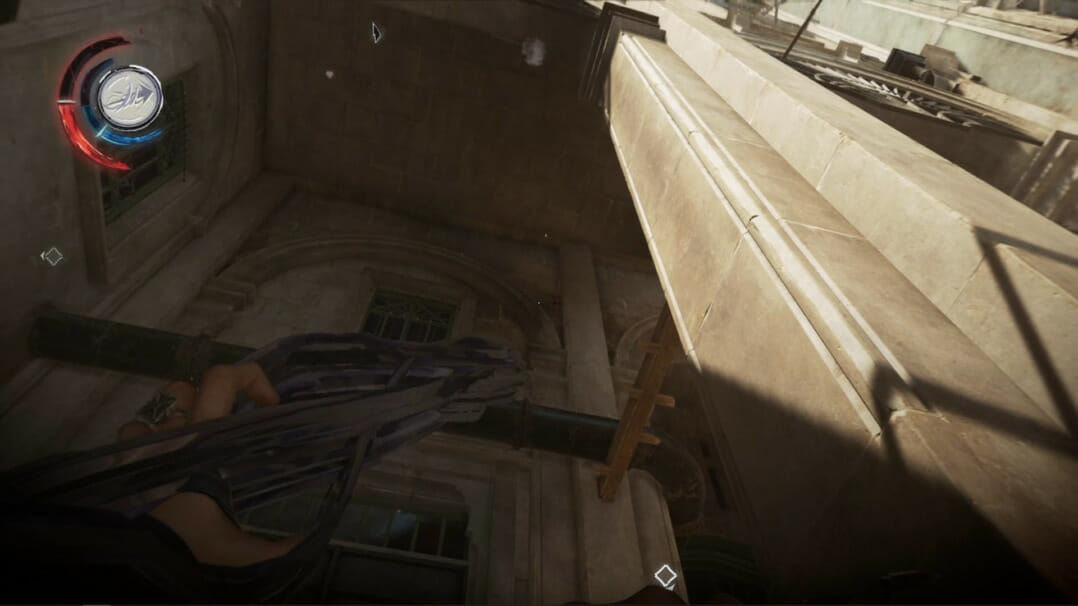 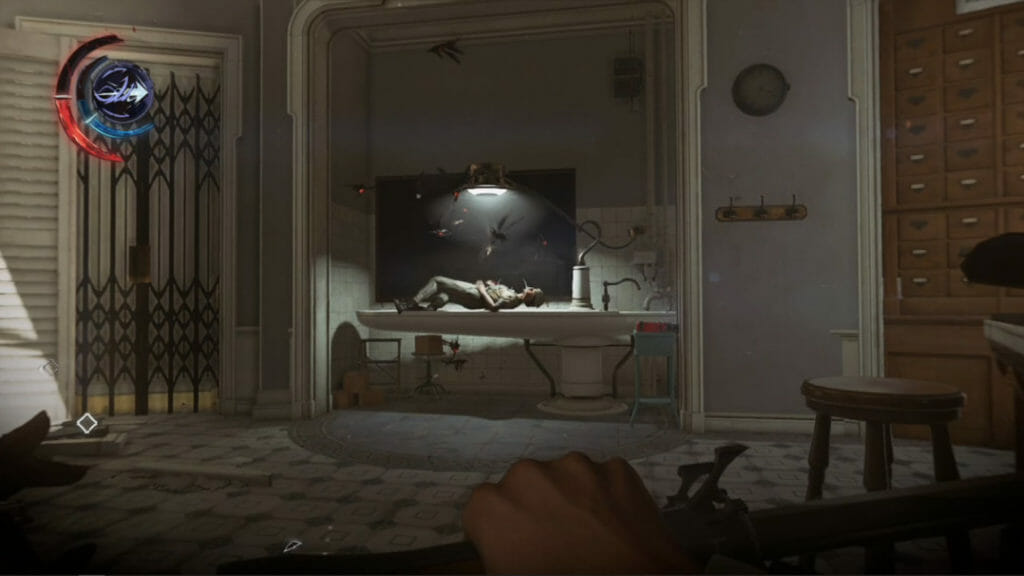 How Does the Logitech Harmony Hub Work? (Simple Answer!)