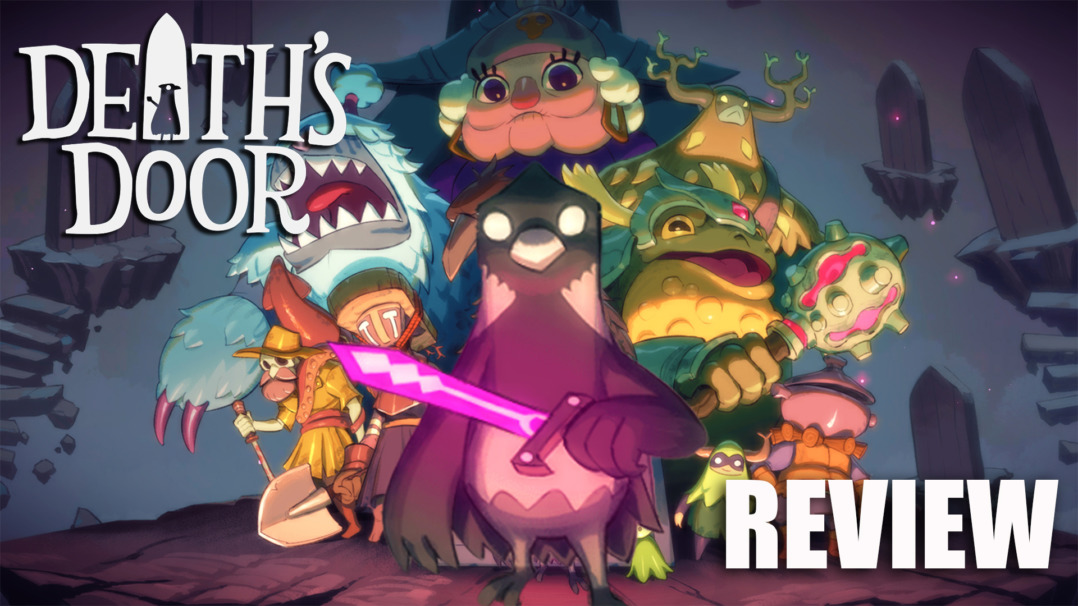 What makes a game great? Dark Souls fans might tell you it’s the unending challenge, the pursuit of “gitting gud”. Or the ability to tell a story without an actual storyteller. Younger gamers will tell you that freedom of expression is what a great title should always have.

Then, there are the competitive gamers who’ll swear by the rush of defeating a live opponent being the absolute pinnacle of gaming experiences. All of these points of view are mainly preoccupied with whether a title achieves a level of greatness.

But what if greatness in a video game lies in its ability to do several things well at the same time?

That’s the argument, I feel, Death’s Door presents. Games need not reach the height of design in order to be one of the best. They require not the most cutting-edge graphics nor the most genius of storytelling methods.

It doesn’t feel the need to challenge its player overtly. It simply needs to feel like a perfect blend of elements, coming together to form a concise, interactive experience. 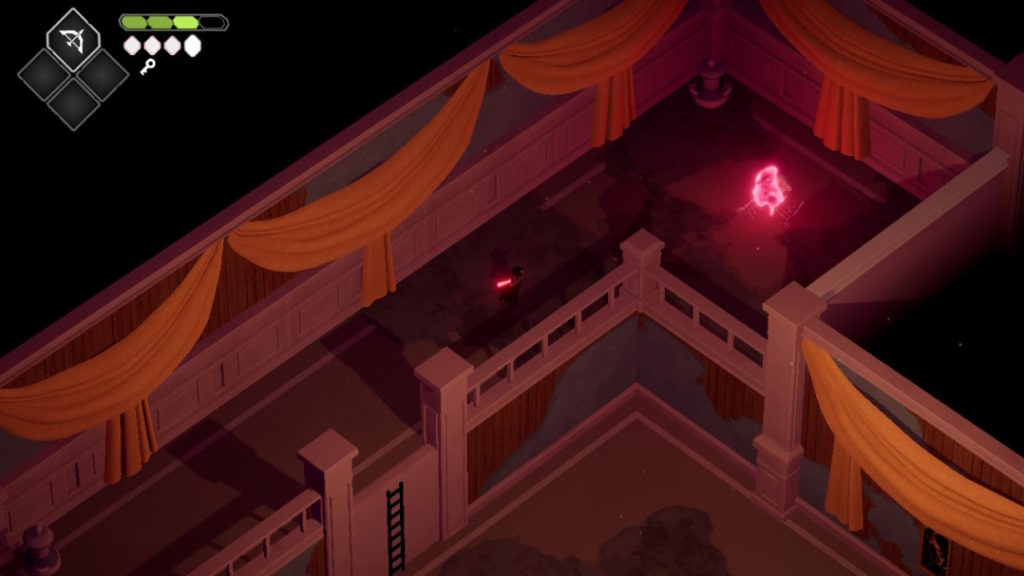 Classifying Death’s Door can be somewhat challenging. Its top-down perspective and penchant for environmental puzzles suggest heavy influences from Zelda. But then, it gives you new abilities that allow you to explore new territories, tipping the scale a bit towards Metroidvania.

And, finally, come the challenging bosses and the limited availability of healing, reminiscent of Dark Souls. In a way, Death’s Door is all and none of these things at the same time.

It’s derivative gaming of the highest order yet feels so unique at the same time. It dares you to make comparisons while subtly also making you see the contrasts. What it inevitably boils down to is a simple action-adventure game enveloped in both melancholy and whimsy.

You’re a crow working as a reaper, tasked with retrieving the souls of the deceased. While on assignment, you find yourself in pursuit of a monster that refuses to go willingly. Upon reaping it, your harvest is intercepted by a bigger, more elderly crow that tasks you with uncovering a conspiracy related to Death’s Door. To accomplish this, you must acquire three Giant Souls, each of which requires you to take down giant bosses, each of which governs its own area of the map.

As you explore and complete parts of your mission, you learn more about the Reaping Commission Headquarters, the crows that have seemingly gone missing, and the background of the commission’s leader, the Lord of Doors.

The overall setting of Death’s Door is one that blends playfulness with gloom. The game’s opening scene sees you in the Reaping Commission Headquarters, a monochromatic place where bureaucracy rules the day.

You converse with an administrator who’s chiefly concerned about the paperwork they’d have to do should you meet your demise. It’s like a type of depressive humor that wants you to poignantly laugh at the futility of life without feeling like all hope is lost.

You’re guided to the door you must take to find your mark, and there’s a clear sense of wanting to find some color by crossing its threshold. And, indeed, some more color is found, its pastel tones barely contrasting with the scene at the commission. It serves as a reminder that you’re out to reap souls. 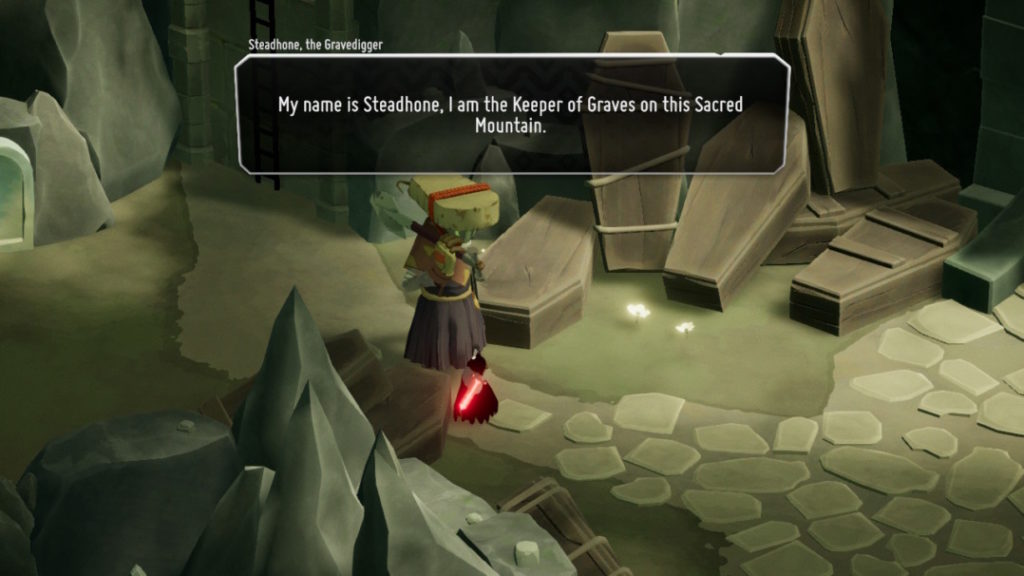 I know this paints a pretty depressing picture, but I can assure you the game is far from it. The game has a very distinct yet subtle sense of humor. Your crow may be silent, but they’re pretty expressive in almost every situation.

A cock of the head here, a shrug of the shoulder there, all subtle minor reactions that, more often than not, land like perfect punchlines to the silliness the world sometimes indulges itself into.

For instance, you encounter a character who has a pot of soup for a head. It’s characters like this one that completely alter the vibe of melancholy around you. On top of that, there are the enemies themselves that have designs caked in whimsy.

I’m confident that most who’ve seen the trailers for Death’s Door can vividly remember the walking castle boss, a true testament of playful design if there ever was one.

Beyond their appearance, these hulking enemies all have one goal, and that is to prevent you from reaping their souls. Thankfully, you’re well equipped to cope with all of their shenanigans.

Your primary weapon is a sword that has two modes of attack, its basic three-hit combo, and a strong chargeable attack. At your disposal, you also have a spirit bow with chargeable shots. Apart from serving as a ranged attack, this bow plays a crucial role in solving puzzles through a variety of mechanics. 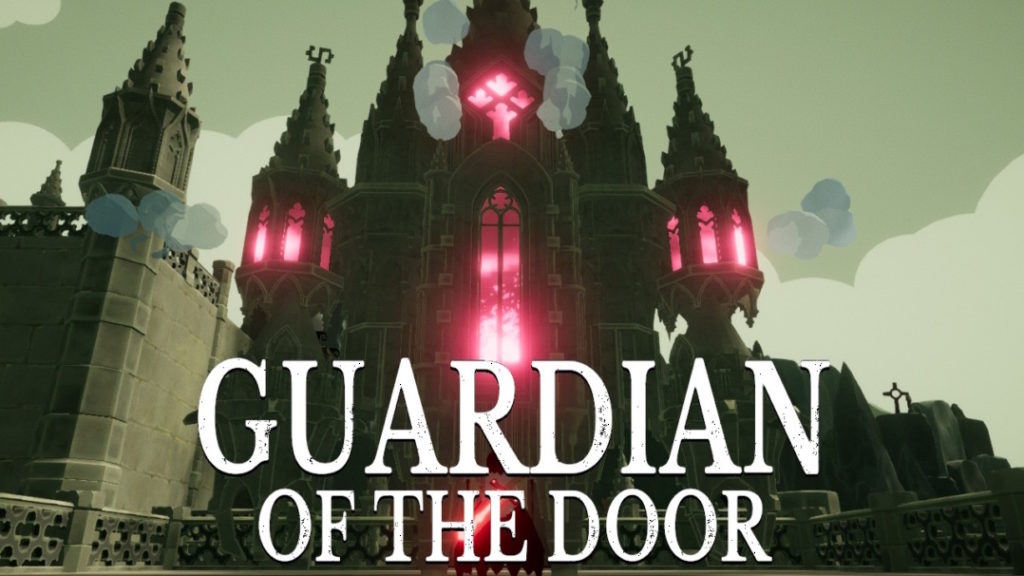 The bow is quite strong, which is why your ammo capacity is very limited, with the only recharge means being landing hits with your sword. It serves as a balancing act that forces you to jump into the fray. The crow’s attacks are pretty potent in general, typically leading to most enemies getting staggered after taking a hit or two.

But, inevitably, the nasties that are out for your blood will try to take a swipe at you and this is where your dodge roll comes into play. Behaving very much like a Dark Souls tumble, this maneuver has ample invincibility frames, granting you a solid method to get out of harm’s way.

You can follow up any roll with your strong attack for a mighty downward slash, as well. Beyond the bow, you’ll acquire three additional abilities, each one granted to you after obtaining a Giant Soul.

Death’s Door comes with its own progression system that’s super simple to use. As you slay enemies, you acquire soul energy. Acquire enough of it, and you can buy an upgrade to enhance several aspects of combat, such as your sword’s damage and reach.

The cost of each upgrade becomes progressively higher with each tier you acquire, making decisions around building your crow straightforward yet meaningful. 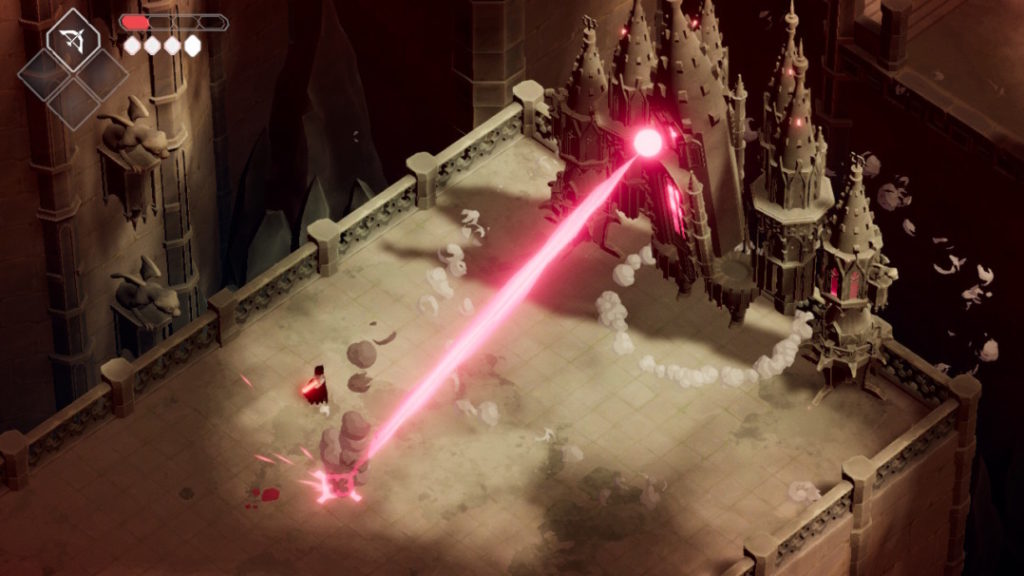 With all this talk of combat, bosses, and upgrades, a looming question indeed arises, and that’s with regards to Death’s Door’s difficulty. I’m pretty pleased to report that the game is challenging but without being harsh and punishing.

What the devs have achieved here is nothing short of remarkable and a shining example of how difficulty can be accessible to a broader audience. The game never gives you more than you can handle based on the tools you have at your disposal.

It also never throws curveballs or uses underhanded methods to catch you off-guard as a means of making “death a mechanic”. Instead, bosses are designed in such as way that you can learn them on the fly.

Each one doesn’t have more than 2-3 phases, and even still, they never introduce an unknown element just to pull the rug from underneath you. Just like the environments of the game, the bosses are puzzles in their own right, actively moving brain-teasers that most can possibly master within a few encounters. 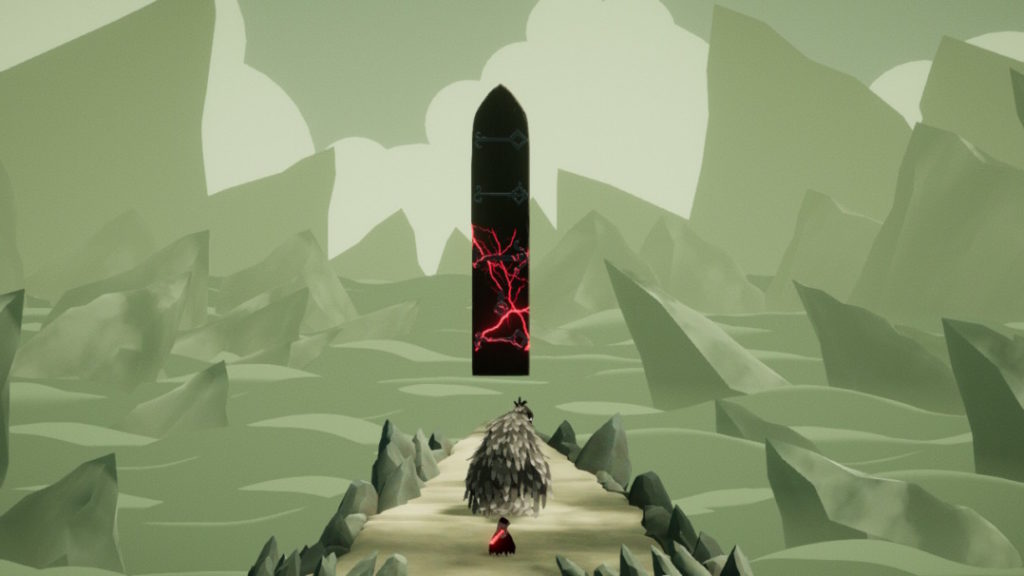 Even when you die, the game doesn’t take away your hard-earned soul energy. There’s no penalty that’ll force you to play differently in order to retain your bounty before you can spend it on upgrades.

Funnily enough, I was under the impression that I was going to lose all of my stash the first time I died in the game. I was delightfully surprised to see that wasn’t the case, a realization that acted as an instant stress reliever, almost like the game was encouraging me to go out and make more mistakes.

Puzzles are at the heart of Death’s Door, permeating across its map and its various biomes. In this area, too, the game is a shining example of the “show don’t tell” mantra that well-designed titles follow.

The game never outright tells you what the puzzle mechanic you’re working with is about, nor does it have a need to do so. It eases you towards realizing how you need to tackle each puzzle either through gradually increasing its difficulty or through the arrangement of its pieces. 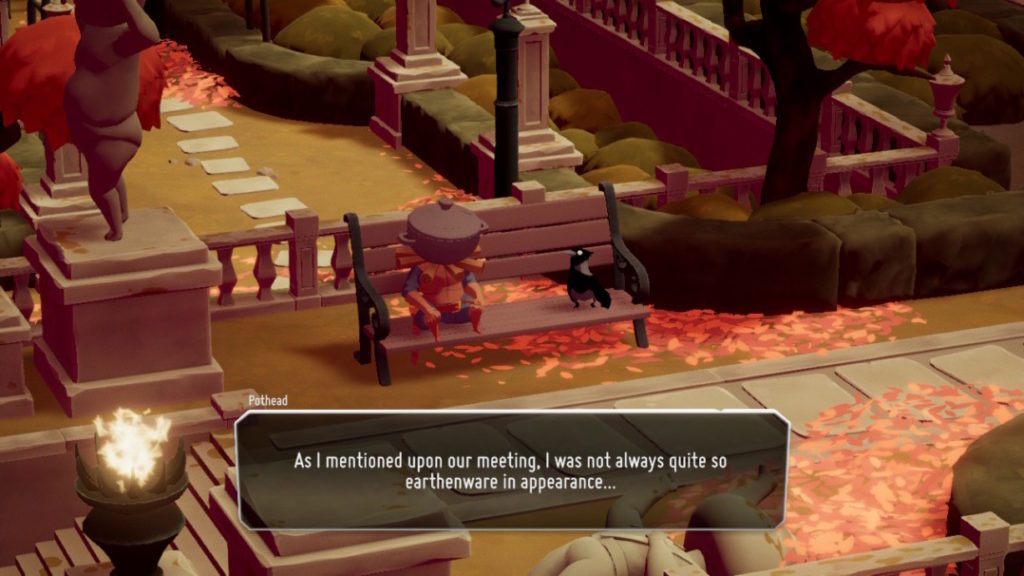 I’m not a fan of too many puzzles, and I found them to be accessible and easy to grasp with barely any moments of not knowing what I needed to do.

Death’s Door is an excellent indie action-adventure and a masterful follow-up to Titan Souls from studio Acid Nerve. Every aspect of the game is carefully crafted in a deliberate yet very shockingly simple way.

It never tries to overwhelm you with the challenges it presents while also providing you with an experience that you want to master. It’s also not a particularly long game with a completionist run time of nearly 15 hours if you’re going for the game’s true ending.

If you’re hungering for a game that you can just pick up and complete with a few sessions, then Death’s Door is a must-buy. 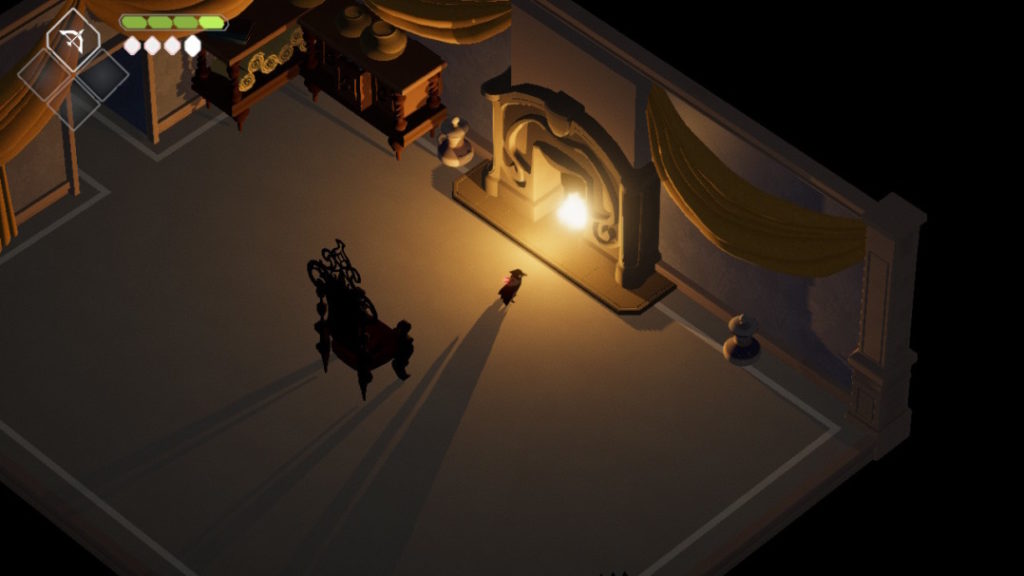 Ultimate Review of the Best Travel Umbrella in 2023