What Is Ray Tracing in Gaming? All The Answers 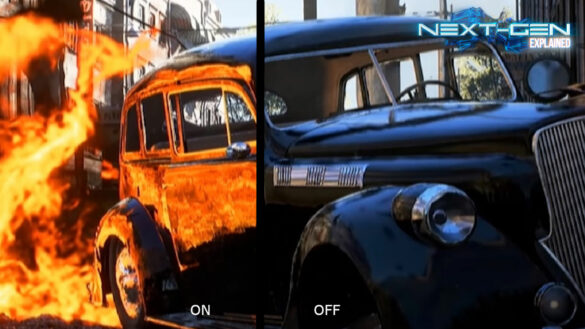 With the new generation consoles, there’s a lot of fanfare and talk about ray tracing. But what is ray tracing in gaming? And is it something you should consider or care about?

Now, if you’re a gamer, you know that graphics play a vital role in giving an out-of-this-world, most realistic gaming experience. And visual gaming displays heighten that sensation which is precisely what ray tracing enhances.

Let’s get some of those ray-tracing questions answered. Let’s start with what RTX is.

Ray Tracing in gaming is the tech that makes lighting and shadows more realistic. RTX’s description may sound basic, but it brings many knock-on effects to your gaming experience.

It offers sunbeams and sunrise benefits such that you get reflections and shadows that enhance your visual gaming experience. It provides a sort of mirror that reflects the environment around you while gaming.

For instance, ray tracing should allow you to see your character’s face if you look at a puddle in the game.

Games are finally able to replicate the sea properly. At the same time, shadows within the title look more dynamic. Think of the sun rising in a game forest. With ray tracing, shadows will get a direct effect, and the idea is that they move as the sun moves to give them a more realistic feel.

Dark environments and fireworks look more realistic with ray tracing. Look at the following image; on the left is RTX off, and on the right is RTX on. 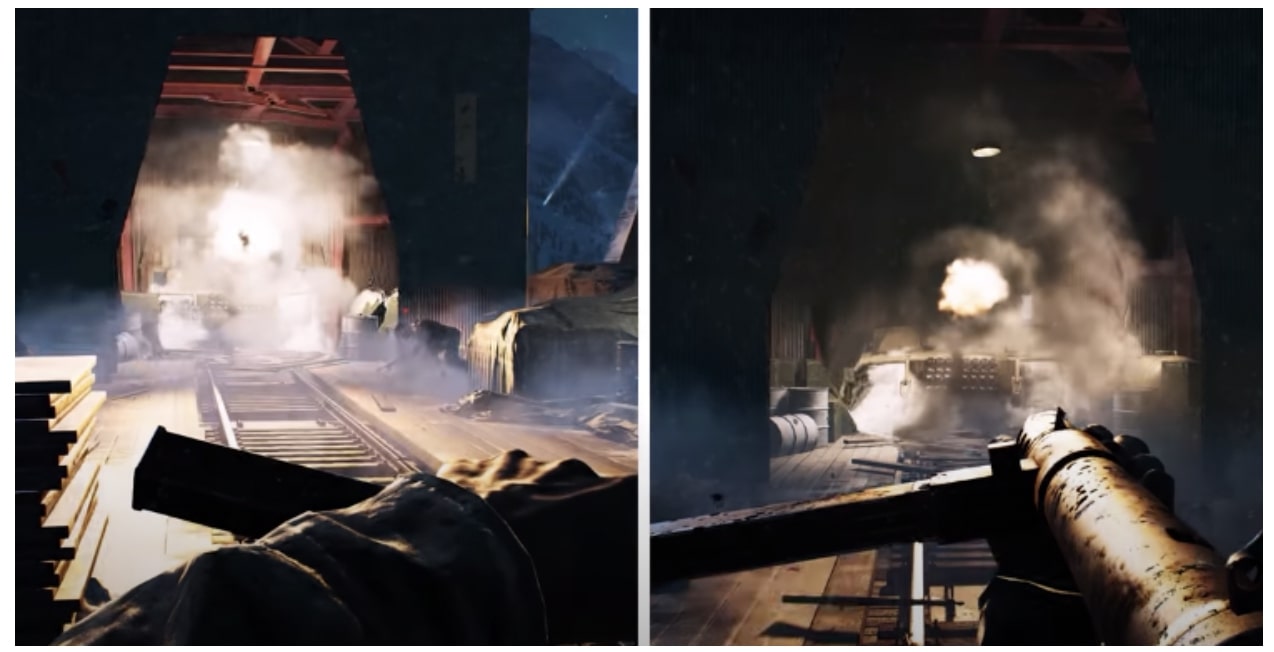 Tip: To play a game with RTX, you need an NVIDIA 2070, 2080, or 2080 TI. You’ll also require the latest Microsoft Update. Lately, you would need the latest NVIDIA drivers.

Ray tracing in Computer Graphics is the rendering technique that realistically stimulates a computer scene lighting. It renders physically accurate refractions, reflections, direct lighting, and shadows on your computer, interpreted as computer graphics.

So ray-tracing in computer graphics generates computer images by tracing light rays’ paths from a camera viewpoint. (That’s vital in determining how you view the image from where you are).

The light rays go through a two-dimension view plane which is the pixel’s plane, out into its three dimension scene and back to its lighting source.

These combined light interactions produce the final illumination and color of that pixel you see on your screen. 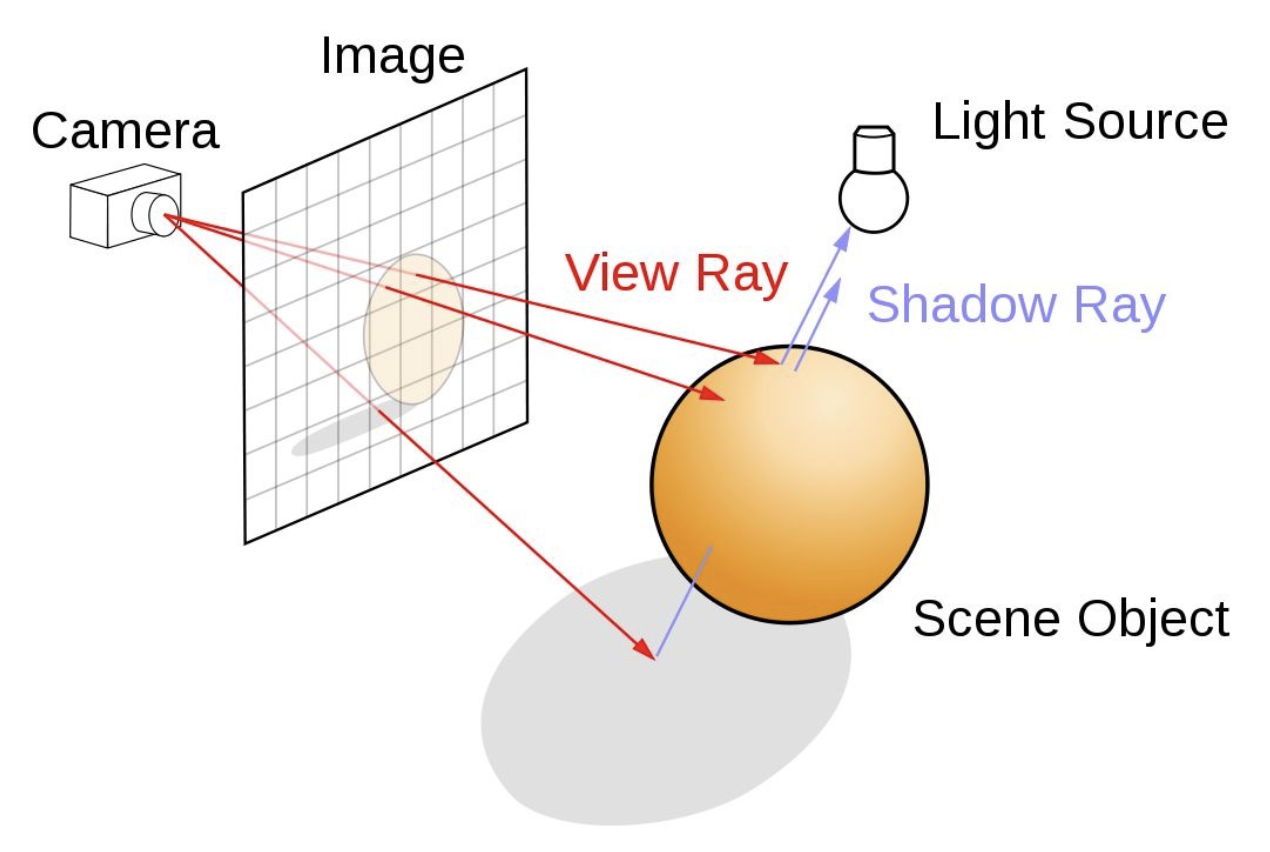 On the other hand, the rasterization technique is what you use to cast 3D objects as 2D ones. It utilizes polygons and meshes of virtual triangles of varying sizes and shapes. The vertices of the triangles show the object’s position in space and its color and texture information.

Afterward, each pixel is reassigned its color value from reading the data stored in the pixels by a shader which affects the colors, lighting effects, and shape textures. So rasterization is where computers convert those triangles into pixels and dots on the two-dimensional plane.

Rasterization is most common in real-time computer images. Recently ray tracing is overtaking it in graphics and gaming because it was the method games used before RTX.

What Is Ray Tracing in Minecraft

Minecraft is many things to different people. For one, it’s a creative tool and a game to immerse yourself in. So basically, it’s what you want it to be.

Ray tracing is a crucial innovation for Minecraft because it gives users a unique custom flavor in each block that they didn’t see anywhere else.

Related: How to Get Minecraft for Free on Your Phone in 2022

There’s an authentic look of Minecraft, which most players like. So maintaining it was vital for its developers. But pushing the boundaries with ray tracing gives the game that unique display for each block.

Look at the image of Minecraft below when RTX is off. 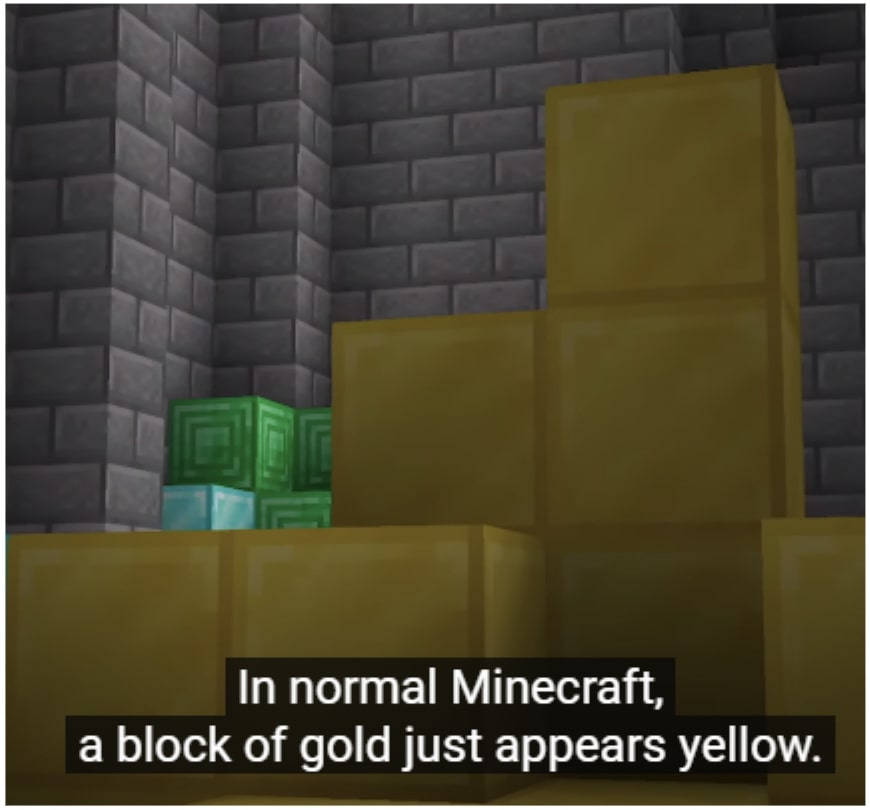 And look at it with RTX on. 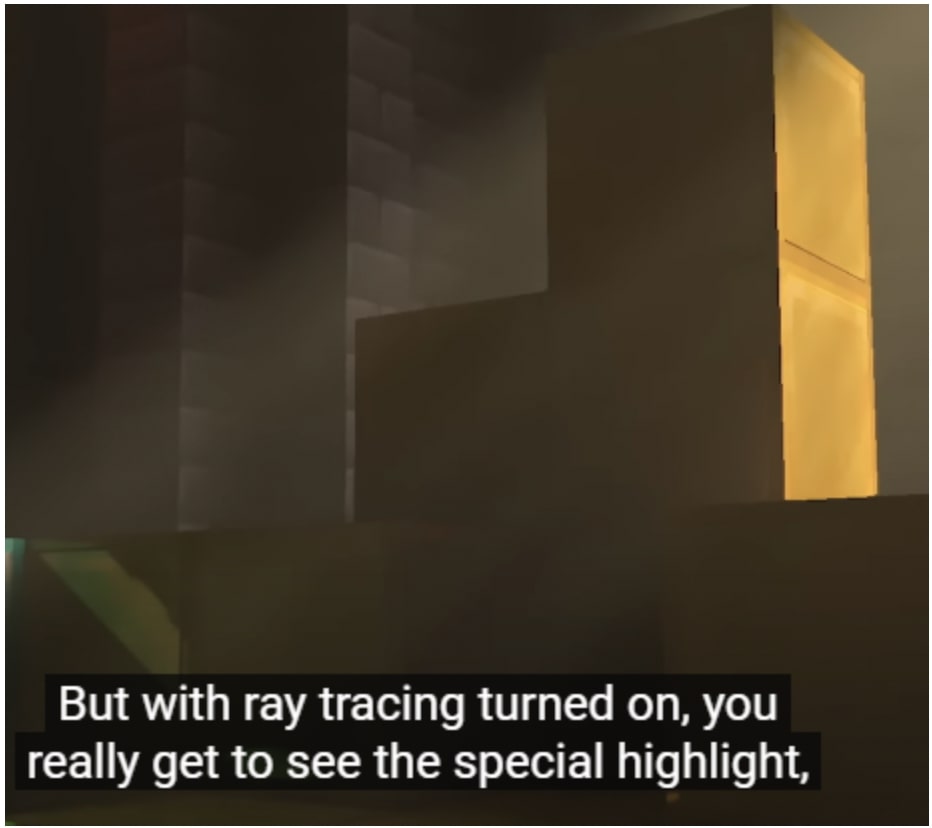 From the images, you can see that a block of Gold is typically yellow. But with ray tracing on, the same block comes with a special highlight, showing its reflection and even a mob reflected in the gold. 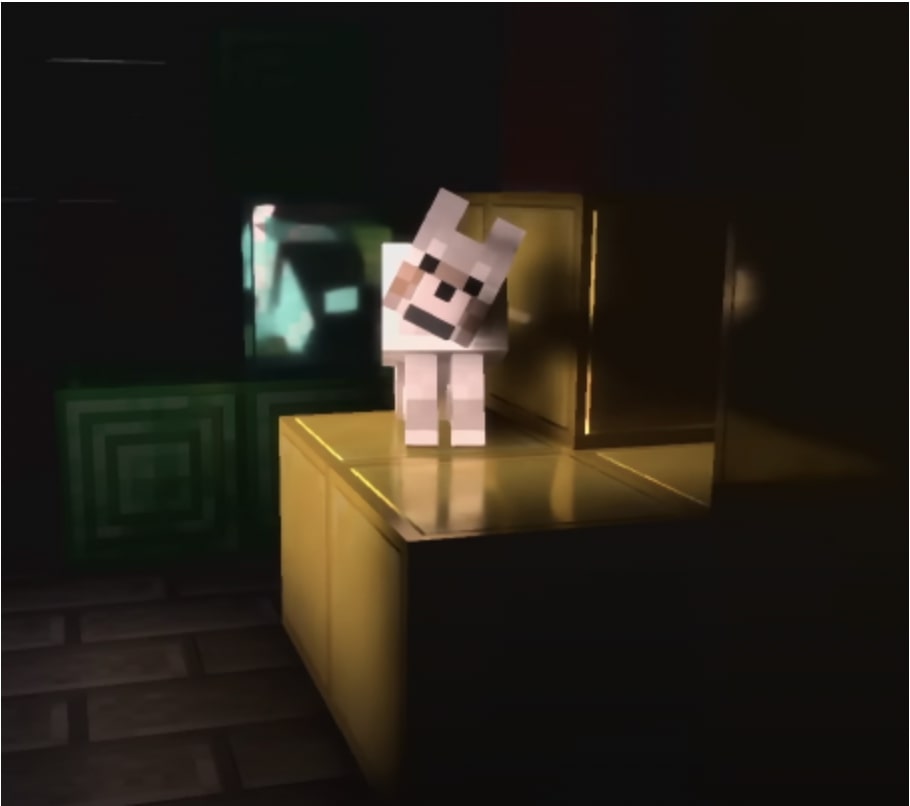 When you’re deep in a cave and light catches a diamond therein, you get a unique rush of excitement that you haven’t felt without RTX.

Also, you see the subtle light reflection in the wood planks when the light seeps through the windows. If there’s a carpet, the rays hit it, ensuring it’s well-lit. Suddenly they reflect on the wall and surrounding environment. 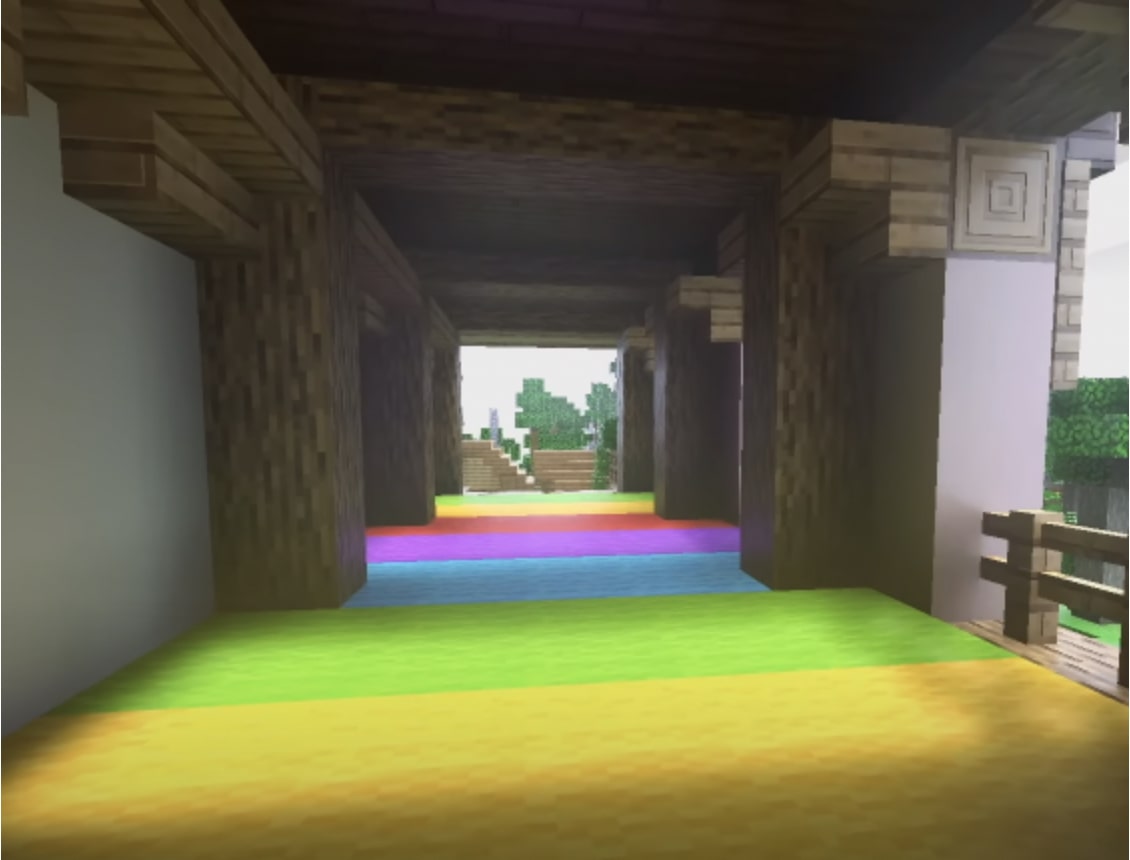 With the ability to model every light ray, you can stimulate advanced materials like ice. Also, immersive blocks glow with higher intensity.

Radiating light cast on the adjacent blocks reveals the reflection of the aura. You can also model how the light rays filter through forage, landing on the ground and the atmospheric light intensity.

Moreover, RTX in Minecraft makes the water look like actual water. It has reflections, refractions, and color transformation through the water’s surface. 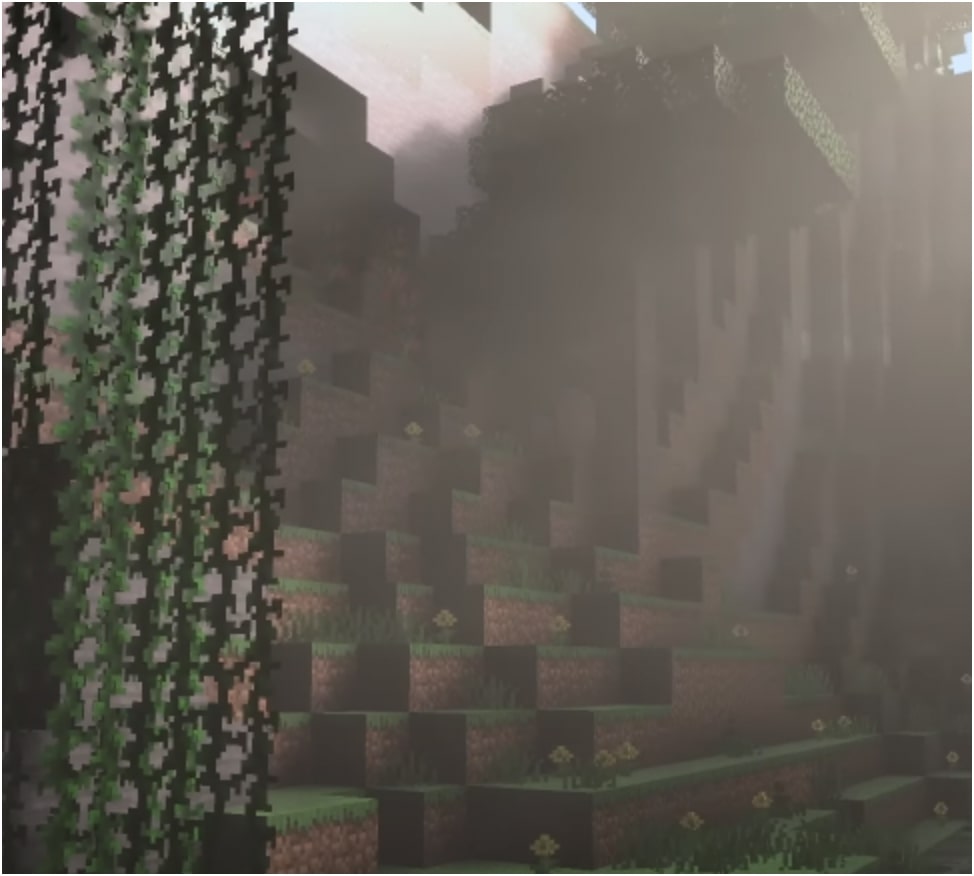 Ray Tracing On vs. Off

Is it a total waste having RTX, or is there a noticeable graphical and experiential difference? The answer is yes. But you need an extra gaming eye to notice the difference for the first time.

Also, some games have a high impact on graphics with RTX on, while others are not that much.

But look at RTX off on Minecraft below. 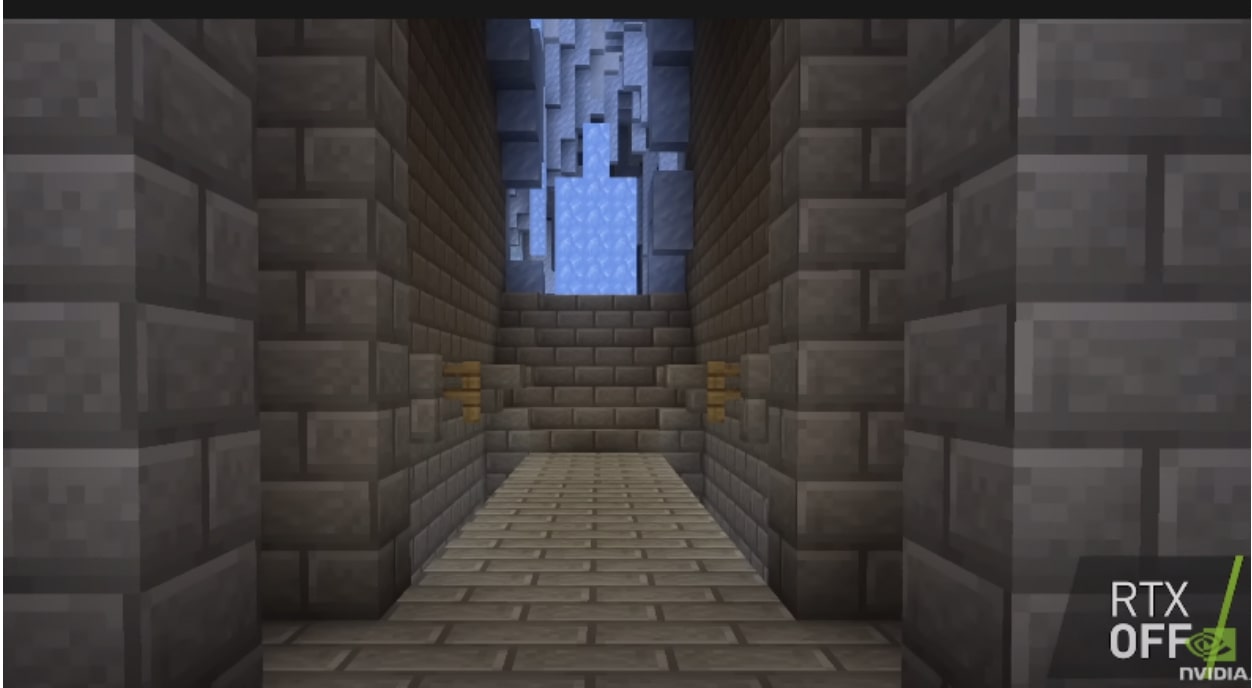 Now look at the same immersive block with RTX on 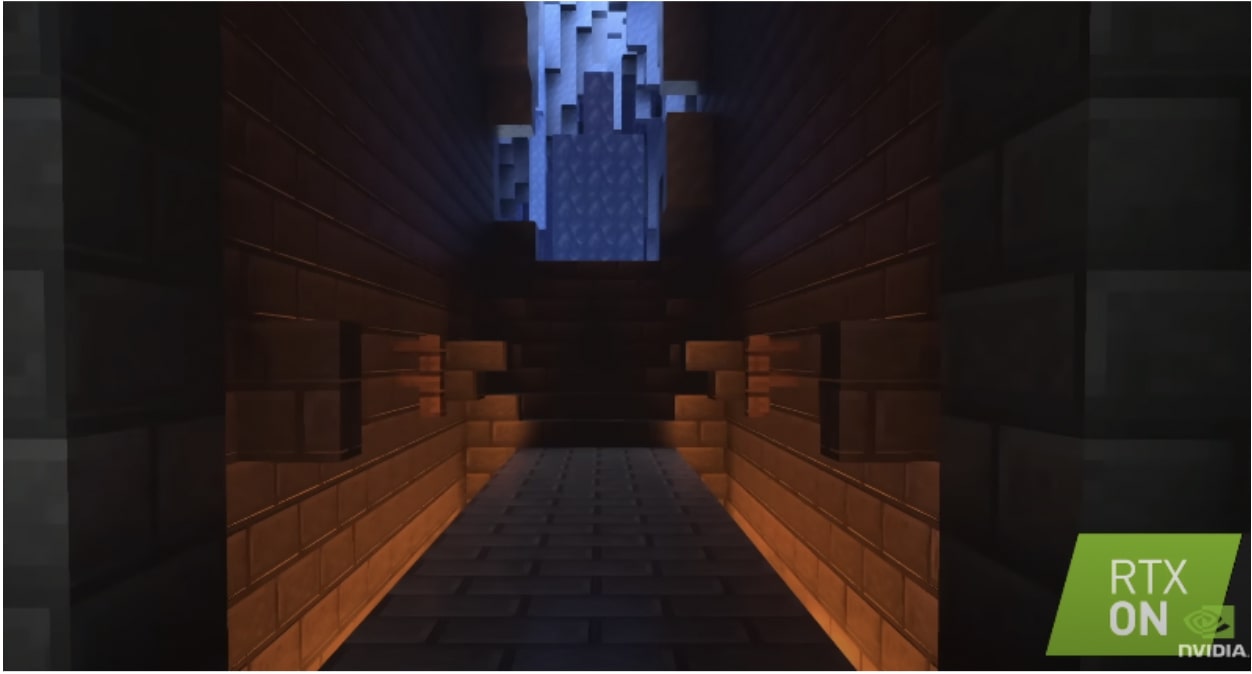 Also, look at this place with RTX off.

Vs. RTX on; look at the reflection and shadow differences between the two.

Some players say it’s hard to tell at first. But you’ll get the hang of it, primarily if you’ve used RTX.

How to Put Ray Tracing On and Off

Let’s use Minecraft Bedrock Editions. Turning the hurdle on or off is an in-built feature in Minecraft settings. But to turn it depends on if your gaming device can support RTX. So check if your device is Minecraft RTX compatible.  To check it, do the following.

After downloading the content, go ahead to play the map. You can also use a texture pack. If you want to use the RTX in your worlds, download a resource from Minecraft RTX. Here, ensure you have a resource pack installed. Whichever package you have is okay.

Next, to turn off RTX, go to settings, scroll down to the RTX button, and toggle it off.

Ray tracing is worth it because it creates spectacular next-level moments. But in some cases, like in GTX GPUs, the extra performance needed has a sizeable impact on its performance. That might cause a mild lag in the game, especially when your wifi has high latency and your gadget storage is almost complete.