Super Yachts : A Different World To The Mere Mortals 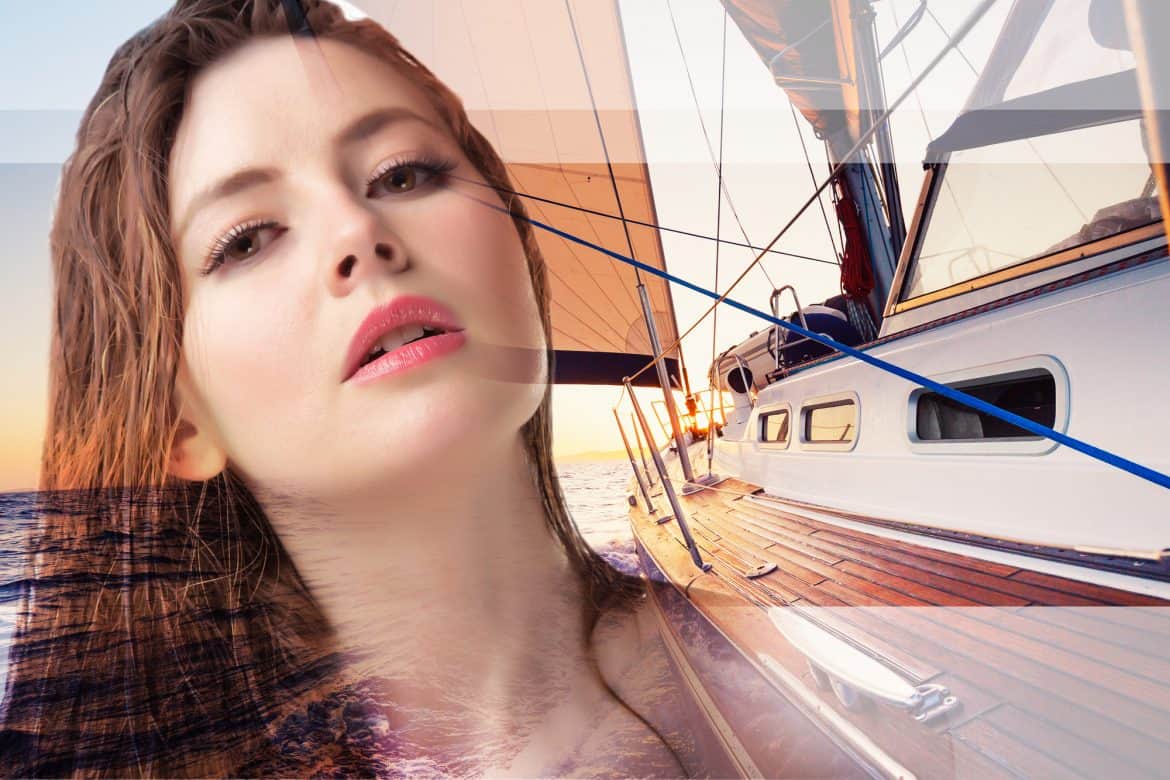 When most people buy a National Lottery ticket or other various money- making ventures, the majority who win, fantasise about fast cars, helicopters, holidays of a lifetime or real estate, how many think, Super Yacht not many I would imagine.?

There is a reason for this, purely because they would need to win an absolute obscene amount to even get close to buying one.

Most people would think £1 million would be enough, think again, that would not get you anywhere near, even if you won the latest

Euromillion`s jackpot which amassed to an astounding 160 million euros would still not be enough.

When you are talking about total luxury super yachts, you are dealing with telephone number amounts, forget millions and start thinking in billions. 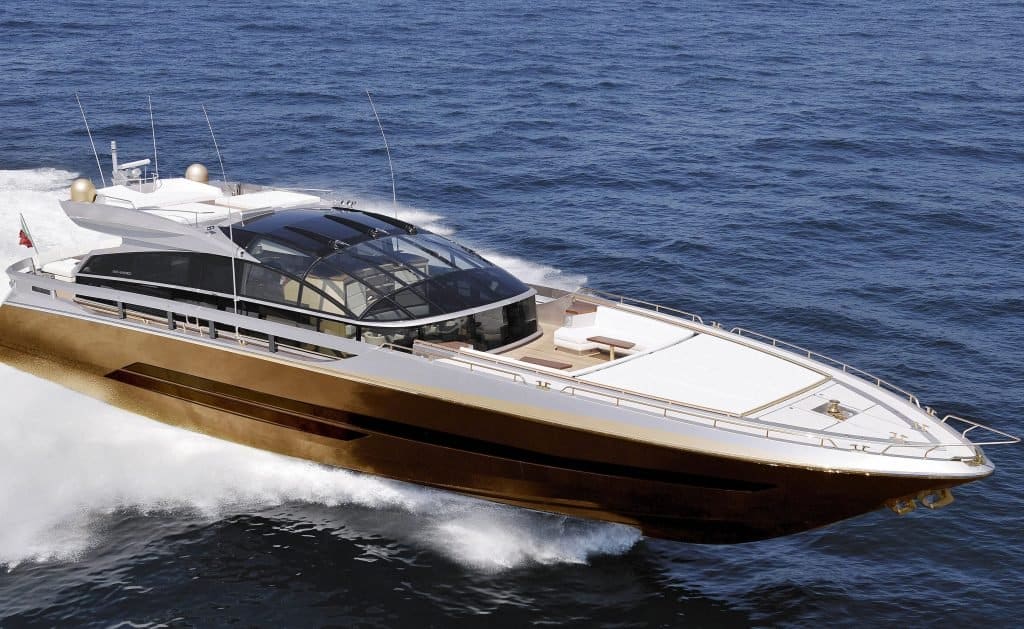 Consider this, the list of the most expensive motor yachts in the world have three billion- dollar vessels in its top ten, which just goes to show how much luxury costs.

A recent survey found that even buying a second hand motor yacht has an average price of 7.9 million euros.

You can see why anyone who is thinking about buying one will need a vast amount of money, not just to purchase the yacht but to maintain and run it.

These things do not run themselves, they take a colossal amount of effort and are manned by small armies of crew members, busily keeping the thing afloat and in tip top condition.

They don’t call them floating hotels for nothing and you know how much they take to organise and run?

Top 10 most Expensive Motor Yachts in The World

The most expensive Motor Yacht in the world by a considerable way at the moment is the History Supreme which comes in at a staggering $4.8 billion which oozes luxury throughout.

The 100 feet vessel boasts an impressive 10,000kgs of gold and platinum fittings that adorn the base, dining area, deck rails, staircase and includes a gold anchor.

The master suite has a 68kg 24 carat gold wall aquarium alongside a statue that is made from original T Rex bones.

Probably the most famous owner of an expensive super yacht is Roman Abramovich who is well known throughout the sporting world as the owner of Chelsea football Club. 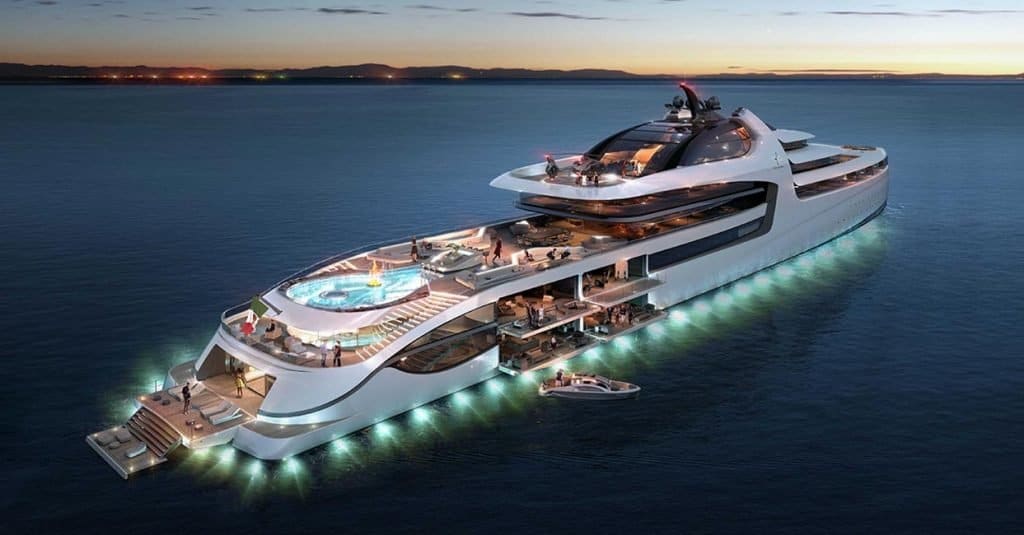 The yacht in question is the Eclipse which is the second largest in the world at an impressive 533 feet.

Boasting such luxuries as an intruder detection system, 2 helipads, 24 guest suites, dance hall, 2 swimming pools, luxurious hot tubs, a submarine that can dive to 50 metres and what every yacht should have a missile detection system.

This also includes a security system that is second to none including armour plating and bullet proof windows, there is also an anti- paparazzi shield that sweeps the surrounding areas warding off any unwanted prying eyes.

One of the most truly remarkable looking yachts has to be the one designed by the Opulent Yacht Company and styled by Filthy Rich Boaters, this being the Streets of Monaco which is so incredible it looks like a CGI concept.

The design is based as the name suggests, Monaco at sea with features including a replica of Monte Carlo, Hotel de Paris and a swimming pool that looks like a beach.

Measuring 500 feet long, this luxury yacht is spread over three floors incorporating helicopters, submarines and jacuzzi`s on the side decks.

What happens if you are not a lottery winner, what are the used options on the market? Depending on how you gauge the term “super” will depend on how much you want to spend, would you class spending £199,999 on a vessel super? Bearing in mind that the average second hand superyacht runs into millions the lower price seems an absolute steal.

Once you have decided on which yacht to buy, the 40 feet mark is a common boundary line for purchasers searching for a new vessel.

Because the terms boat and yacht are often used together, most sailors agree that the term yacht is indeed applicable to any vessel over 40 feet in length. The way to distinguish if a vessel is a ship or a boat is that you step into a boat and onto a ship.

When a yacht is over 500 feet can you imagine the size of the engines and engineering that is needed to plough these monsters through the water, especially as water speed is a lot harder to cut through, ever tried running in water, it takes a tremendous amount of effort?

The service and maintenance that these engines need is the most important part of any vessel, failing to maintain them would be like having a Rolls Royce parked outside without any wheels.

The luxury of having all the mod cons would fade dramatically if the machinery, including engine parts were not inspected on a regular basis, Companies such as Bearingtech can help keep your vessel afloat by supplying all the parts including bearings, belts and accessories.

Most Famous Ships In History

The British nation as a whole are known for being sailors in whatever guise they choose to use, whether it`s on a boat a ship, a yacht, a barge or a bathtub, you name it we sail it.

From Lord Nelson to Walter Raleigh from Francis Drake to Francis Chichester we are never more comfortable than when we are on the water.

But where does this obsession come from? Is it because we live on an island? Or a pure sense of adventure which continues today with cruises and holidays.

One adventure that always conjures up the question why?

Is the sailing round the world single handed, why would anyone want to sail across vast shark infested oceans and tackle mammoth waves and storms?

Why endure all the hardship and turmoil? What possible pleasure can you get from being faced with a 50ft wave coming towards you, No, me neither but we still do it.

One thing is for sure, whether you are a billionaire or a normal working person we will still continue to keep afloat no matter what the size of vessel albeit a small boat or massive yacht.

Yachts, boats and ships get more expensive year on year, but the water that they sail on stays the same, never changes, it`s been the same from the year dot.

Anyone fancy a paddle?